We decided to wait a little while before putting this story up as a news piece. The idea certainly wasn't to delay giving you information. It is merely that there have been so very many speculative news pieces floating around about Michael Schumacher's condition, that we didn't think it made sense to add to it all. However, given that some days have now gone by without hastily retracted statements perhaps there is some merit to this piece of news after all. 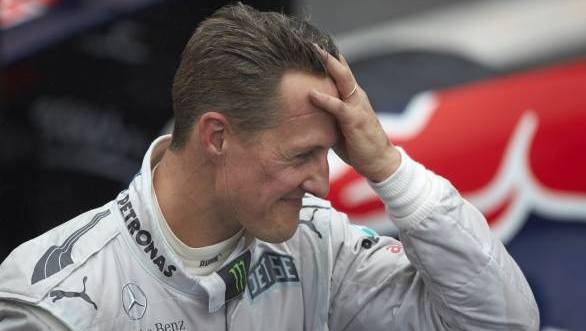 In a statement released to the media on the 4th of April, 2013, Michael Schumacher's manager Sabine Kehm stated that the German seven-time world champion had shown "moments of consciousness and awakening". Kehm also declared that the family was with Schumacher and the medical team at the hospital at Grenoble and was continuing to remain positive throughout the ordeal. She also declared that there would be no further details provided about Schumi's condition and asked the media to respect the privacy of the family. This statement, however, comes after a prolonged silence on the part of Schumacher's family, which probably is an indication that there has been some concrete progress.

Meanwhile, reports have also emerged that Corinna Schumacher, Michael's wife, is preparing to take him back home. Corinna is in the process of spending 19 million USD in converting a section of their house on Lake Switzerland, Geneva, into a purpose-built medical facility that will cater to Schumacher's needs.

Since his accident on the 29th of December, 2013 (when he had a fall skiing at the Meribel resort in France), doctors operated on Schumacher twice to get rid of blood clots in his skull. After keeping him in an induced coma for a period of a month, the gradual process of awakening him began. It is now two months since they began to try and bring him back to a state of consciousness. In that time he has reportedly lost 25 per cent of his body weight and now weighs a mere 55kg.

Fans all around the world are hoping for Schumacher's recovery.