Ask any racing fan what the most iconic Mercedes F1 car is and it's very likely that response you'll receive will be "the W196". This is not without good reason. The Rudolf Uhlenhaut-designed car won Juan Manuel Fangio his second world championship title and had a rather curious pedigree too. 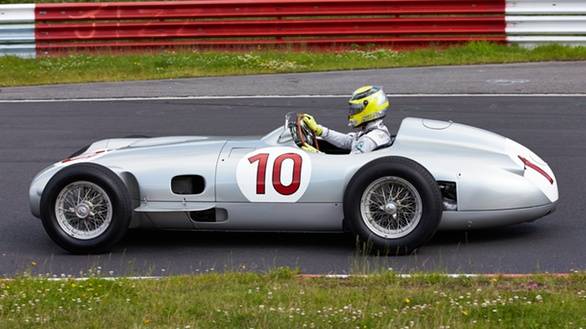 The car was initially designed with streamlined bodywork and concealed wheels, but wasn't successful. After it lost at Silverstone, the open-wheel version of the car debuted at the Nurburgring and went on to win the 1954 world championship title.

In fact, Fangio won the 1954 German Grand Prix and Swiss Grand Prix back to back, making it the first time a Mercedes-Benz ever won consecutive races.

The Argentinian-born driver used this more maneuverable open-wheeled version to win that year's subsequent German and Swiss Grands Prix, securing the second of five Drivers' World Championship titles. Mercedes-Benz produced 15 examples of the W196 for the 1954 and 1955 Grand Prix seasons, several of which have been retained by the company. Apart from the paint finish and some replacement hoses, the car remains in the same condition as it was in 1955.

The 180 MPH Mercedes was being sold by the Emir of Qatar, who acquired it from the German industrialist Friedhelm Loh about eight years ago, according to dealers with knowledge of the car. The buyer was an overseas bidder on the telephone, with six under bidders.

The straight-eight, 2½-liter Mercedes is a variant of the streamlined aluminum-bodied 'Stromlinienwagen' in which Fangio won the 1954 French Grand Prix.