Every year in August, classic car enthusiasts assemble at Pebble Beach, California to witness some of the finest automobile specimens in the world. This year, a concept that grabbed a lot of attention was the Vision Mercedes-Maybach 6 luxury coupe. Mercedes claims that the design of the 2+2 seater concept is a tribute to the classic lines of aero coupes seen in yesteryears. The concept measures close to 20 feet and has large 24-inch wheels with transparent panels. Powering these wheels are four magnet synchronous electric motors that make an insane 750PS of power. 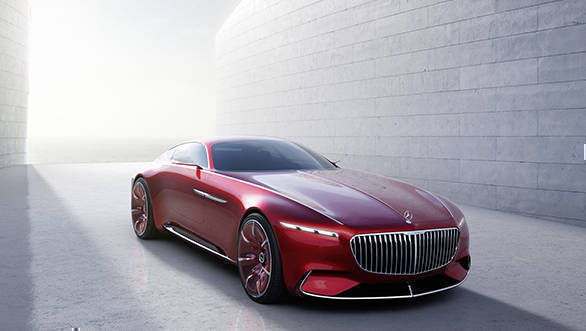 The radiator grille draws inspiration from Mercedes-Maybach cars with finely machined vertical slats. The grille has Maybach etched on it with the Mercedes logo positioned above. The concept also gets a long hood much like the classic cars. The other highlight of the design is the gull-wing doors, a popular trait of the Mercedes design. The last car from the German brand to get this feature was the Mercedes-Benz SLS AMG. The mirror also comes equipped with cameras.

To the rear, the Vision Mercedes-Maybach 6 concept gets an extended tail section similar to luxury yachts. The sleek lights on the rear are placed on the outer edge, highlighting the larger width of the overall design. The slender rear windshield is split in two parts by a central ridge line flowing from the roof to the tail section. The other distinct features include the rear diffuser with aluminium frame and the air outlets placed behind the wheel arches. 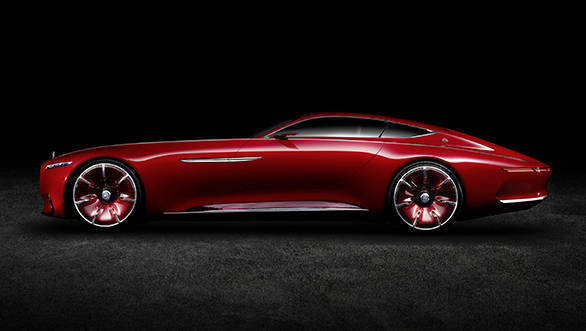 Inside the Vision Mercedes-Maybach 6 concept, the conventional arrangement has been complemented with high-tech equipment. The 360-degree lounge like dashboard flows from the door trims into the central section, which makes it look extremely premium. Mercedes also claims that the materials used in the trims will offer luxury of the highest order. The doors and the dashboard will feature traditional wooden trims while the floor area will have an elm finish like that of an yacht. Mercedes-Benz has been working on the use of elm on its present cars. 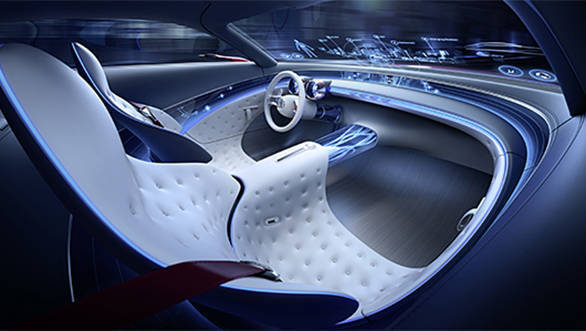 The instrument cluster gets a combined digital and analogue display. Various information -  such as seat positions, navigation etc.  - is displayed on a digital strip. The content on the digital screen extends to the extreme points in the cabin, making it easily visible for all the occupants inside the car. In addition, the front windscreen acts as a display for driving-related data and geographical information. The information can be accessed by gesture control of occupants.

Instead of conventional buttons on the trims, the Vision 6 concept gets a body sensor which scans the passengers and accordingly adjusts functions such as automatic climate control, seat massage, seat position etc. The sensors, which are embedded in the upholstery, also note the colour of clothing and the ambient temperature and accordingly lighten the cabin. With all these features, the Vision 6 Mercedes-Maybach concept will set a new benchmark in luxurious offerings, giving the driver an option to choose between digital and autonomous mode. 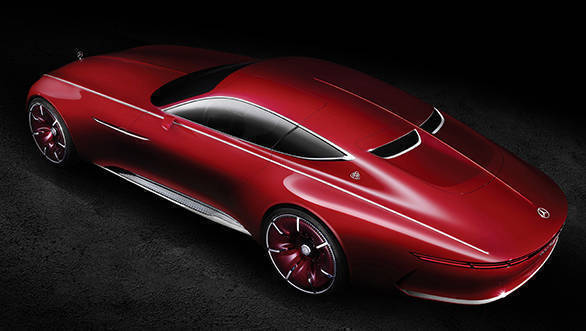 The Mercedes-Maybach Vision 6 concept is a pure electric car that makes use of permanent magnet synchronous electric motor with all-wheel drive. The combined output of the system will be 750PS. The batteries are placed under the floor. The company claims that the Vision 6 can sprint 0-100kmph in less than four seconds and reach a max speed of 250kmph. On a single charge, the Vision 6 has a range of over 500km. The electric system comes with a quick-charge function which can charge enough, in five minutes, to deliver an additional range of 100km. The battery can either be charged with a cable connection at a public charging station or a conventional domestic outlet, or can be charged wirelessly, via an electromagnetic field.

Prior to the Vision 6 concept, Mercedes had showcased the Vision EnerG?Force (Los Angeles, November 2012), AMG Vision Gran Turismo (Sunnyvale, 2013) and the Vision Tokyo (Tokyo, 2015). The Vision Mercedes-Maybach 6 concept was displayed at the last weekend in the Monterey Car Week at the Pebble Beach Concours d'Elegance.