Rohtang, at 13,500 feet above mean sea level is a bit of a headache. Not because of its height but because of where it is located. Just 50km from Manali, it is a cold, foggy mountain pass that is a tourist hotspot. All of us at OVERDRIVE remember it as a pass that is intensely difficult to cross.

The reason is traffic. We have all struggled past tens of kilometres long traffic jams on the mountain. Between the terrible roads and the insane traffic, Rohtang can add as much as five hours to the driving day.

Which is why we planned to beat the tourist traffic by leaving at four in the morning and getting through it before the tourist taxis could get in our way. But it all changed. We left at almost 08:30, having had breakfast, and the road to where the climb begins was beautiful tarmac. We also immediately hit the remains of a landslide which had destroyed the road but soon it became clear that only the smallest part of the hill was going to pose the sort of challenge we were expecting. 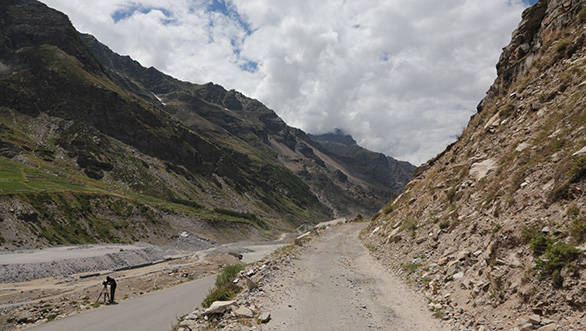 The run in the Khoksar valey is beautiful

Because not only has the Himachal Pradesh government somehow sorted out the issue of the umptimillion vehicles that climb the mountain daily but also that most of the road is now picture perfect tarmac, the trucks that lumber up the hill have disappeared and in some places, the road is even two-three lanes wide, no small feat given the height of the pass.

Our Audis were registered in Maharashtra and were duly stopped at the barrier at Marhi. We were asked to show the permits  all cars not registered within the state require a pass to get past Rohtang, and the condition is that you must be headed past the pass rather than to the touristy top itself.

Paperwork inspected, we rolled on and noted that Marhi - usually a bend in the road jammed full of dhabas making the most of the pass' famous traffic jams  - seems a little more sparse and subdued.

Our guests - first timers - did not quite understand why we all seemed to have relieved smiles, but we were on top of the pass before we knew it and we even managed to enjoy the relentless pitches of the shilajeet salesmen (something one of our guests quickly explained to another as Indian Viagra).

Crossing the Rohtang Pass is an event for another reason. The pass is great at blocking weather, and that means than when you cross over to the Khoksar side, the weather is always dramatically different. 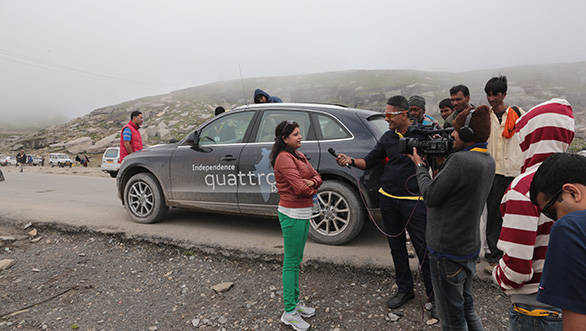 This time, as usual, the dark, cloudy pass full of strangely suited tourists on sad looking horses gave way to a bright, impossibly sunny other side with picture perfect white clouds, lush green grass coated hillsides and the white dots of grazing sheep in the distance.

The climb down to Khoksar was uneventful. The roads are in broken, but useable shape and clearly it will soon be tarmac. Down in the valley, the roads get better and the stretch from Khoksar to Tandi remains to my mind one of the most beautiful of Himalayan drives. So beautiful, that our polarised Oakleys that generally make everything look vastly richer and more colourful, struggled to enhance the wonderful vistas.

Khoksar is famous for many things, including Sharmaji's Dhaba that serves the most amazing meat-rice plate. The vegetarians were similarly impressed with the kadi and the dal. The upshot is lip-smacking food in a bright, sunlit Himalayan valley amidst chatter, laughter and the faint gurgle of the river nearby. Our fleet of HTC One's also got their day in the sun because the awesome beauty of the place, seen through a set of nearly 10-12 new eyes and eight HTC One Ultrapixel cameras made for animated discussions and vehement "mine's better", er, discussions.

The rest of the day was brilliant. The roads remained amazing for the most part, as our Audis speared towards Jispa, our stop for the night. The altitude wasn't high enough to cause problems, the roads were in surprisingly good nick and some of the scenery should really be banned for bring pretty enough to distract drivers. The sight of slackjaws in our back seats for our bunch of Himalayan first-timers became something we got used to this day. Thank God for the HTC phones, for they allowed our new friends to quickly capture memories to share. The Audi power window buttons, as you can imagine, got quite the workout. 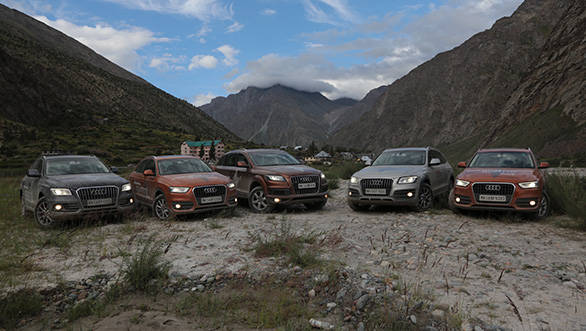 The Audis lined up at Jispa

The evening was proper, old-school Jispa fun. We went out on the wide river bed for some photos and one by one our whole crew turned up. Some enthu-cats even went hunting for a rumoured pancake shop returning walk-happy but pancake-poor.

To their full credit, despite a relatively long day and having their first taste of the lack of oxygen, our guests, God bless them, matched Team OD's pace and enthusiastically backed our ludicrously strenuous plan to leave Jispa at four AM so that we could see the Tsokar Lake in daylight the next day.

The dinner festivities were, therefore, short and sweet and having had a great little bowl of sevaiyan kheer at the Hotel Ibex, all of our changed out of our Nautica duds and quickly went to bed.