Four am. A cup of tea is a strong contrast to a silent but strong cold wind that blows through Jispa. The Ibex, a Himlayan icon almost, is abuzz as bags get carried down the steps and into the cars. Tentacles of sleep find no purchase at all. There is a sizzle in the air because it is going to be a long day of driving and some spectacular bits lie ahead.

Half an hour later, people are beginning to feel the altitude. We make the first of our nausea stops and soon after, the pee stops will become a regular feature of the drive. Don't laugh. Altitude sickness is serious business and at its worst, can kill. It begins with nausea and headaches and gets worse from there. The kill is to stay hydrated and keep eating. And the former is like a computer. Input eventually leads to output. Our first formal stop is at Darcha, where a policeman in surprisingly good humour for the hour, takes down our driving license, car registration and passenger details before carrying on. The double metal bridge is being replaced by what looks like a more permanent solution.

Inside, I'm a little disappointed. Darcha is a huge valley where the river widens into a massive plain surrounded by mountains. It arrives suddenly into a bend and is a searingly beautiful sight both as you descend to the check post and as you climb up out of it. In the dark, it's all the same. I can see the daylight image in my mind's view but I haven't a high-res screen like the HTC One's to share it with the rest of the crew.

Then starts the climb to Baralachla. At 15,500-odd feet, this is considered to be amongst the most dangerous of Himalayan passes. The climb is all-tarmac and there is no traffic, but it does nothing for my sense of dread. I've always been afraid of this pass and it hasn't changed. 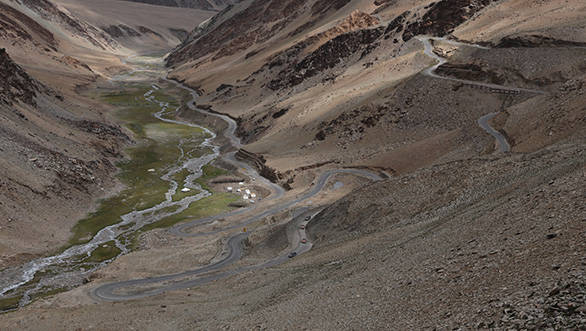 We cross the famous Gata Loops, an endless series of hairpins that mark the end of the Sarchu experience and cross first the Nakeela

The top is nice. Prayer flags flutter quietly and all around are stones organised into little pillars that mark wishes and hopes. And within ten minutes the good cheer of the top of the pass has evaporated. People are clearly short of breath and we quickly hop back in our warm Audis, unzip our Nautica jackets and start rolling towards Bharatpur City for breakfast.

Bharatpur City, even through the Oakleys, is a four-tent stop where the old parachute tents have slowly become more and more permanent. Breakfast is surprisingly generous in spread  you can have eggs, bread with jam or butter, Maggi (the Himlayan staple), sweet tea or the butter tea Ladakh is famous for. I order that last one and am told that it isn't made in Yak milk anymore.

I offer it to Udayan, one of our new crew members, and he smiles and says, "Soup!"

Heading up to Sarchu, the first of the high-altitude plains, we spot marmots out sunning themselves as well as yellow-billed chuffs that are crow family birds with bright yellow beaks. 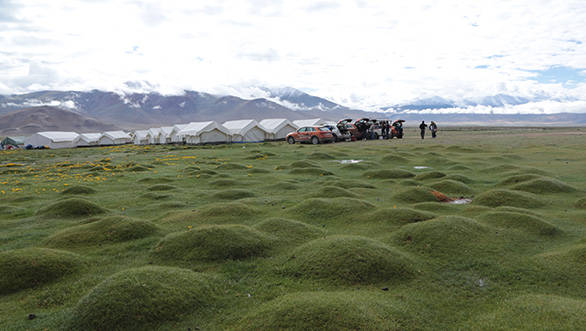 Sarchu itself is heart-stoppingly beautiful. The road snakes into the plain and is framed by mountains done in all possible shades of orange and brown. The polarised Oakleys only make it look even prettier. On our left is a river valley where the water has carved out these amazing pillars of soil. By the time we stop at the HP-JK border we need a break from the beauty, almost.

We cross the famous Gata Loops, an endless series of hairpins that mark the end of the Sarchu experience and cross first the Nakeela (the only non-pass on the Manali-Leh run) and then the Lachungla (all the boards use this name except for the one on top which says Lachulungla). It is a high pass but not really a talking point.

The next big thing is the descent into Pang and its startlingly orange sandy-desert sort of vibe. An hour or two later, we are all having Thukpa or Maggi or dal-rice for lunch as a good-humoured lady chides us for constantly asking for meat in a veggie-dabha in Pang. Incongruously enough, an army Stallion truck rolls in and sets up a souvenir shop not 20 feet away.

We instead go over and chat with an Austrian gent on a motorcycle before the rain reminds us that it is time to get up to the More Plains.

The More Plains are stunning. There is now a flat and wide road that runs through it but unlike the old road, it runs to the left of the valley (as you head towards Leh) rather than in the centre. Which makes it non-equidistant from the mountains on both sides and I personally think that this practical decision (less flooding and damage) takes away from the beauty of running down the middle of this wide, flat high-altitude plain. In the distance, black spots are yaks grazing and white spots are the tents of the nomads who own these yaks.

Then we find what looks like a dirt runway that runs down the plain and the next five minutes are spent in the breathless pursuit of speed. Imagine the biggest, widest plain you've ever seen. Frame it with mountains. Now imagine five Audis running down the middle at high speed. Epic!

We test the HTC Ones' battery lives as the amazing scene demands endless photography before we cross a dry lake bed and then regain the tarmac road before finally rolling off the main roads towards Debring, our camp for the night and beyond, Tsokar, the brilliant lake.

We hit Tsokar first. We get out of the warmth of our leather-clad cabins and it is instantly much, much colder. The weather is closing, the wind is rising and it is looking ominous. Team OD seems not to mind and neither does our waterproof Nautica gear, but our guests are feeling the altitude and the cold is making it worse.

Within minutes we have headaches and the constant request to head to camp. We elevate the mood by allowing the guests to drive the SUVs the 4km to camp. Some of them have such epic headaches, that they decline the offer.

Debring is a test of fortitude. It is very high up, it is very cold, the camp can come across as a bit basic and the loos are a bit of a walk from the tents. And it is so cold that hot dinner grows cold on the spoon while it comes to the mouth.

Sleep then, is bliss. Two guests sleep with an oxygen can handy just in case. I awaken at four am to go to the bathroom and as it turns out, meet Alan. Both of us forget what we woke up for as we catch the splendour of a bright night sky. The clouds have gone, leaving behind the uncorrupted magnificence of the Milky Way. Neither of us have an HTC One on us at that time. Drat.

We plod back to our tents in the cold, strangely warmed by the sight of the amazingly clear sky. It soothes over the breathlessness a bit, hides the squelch of the near-freezing, rain-wet ground under our feet and we fall back asleep easily.

Maybe it's because next up is a short driving day into Leh.