Formula 1  the pinnacle of motorsport itself. A racing series that has always believed in technological advancements and development of the racecar, often despite road blocks from critics, press, experts and the FIA. In the quest for every tenth of a second, each time a manufacturer has come up with a piece of engineering that would give its car an edge, the FIA has come down hard banning or imposing strict limitations on its future implementations in the sport. Men like Colin Chapman, Ken Tyrell and Gordon Murray would innovate, the FIA would restrict, but somehow in the end, technology would prevail. Perhaps it is this aspect that makes F1 special. 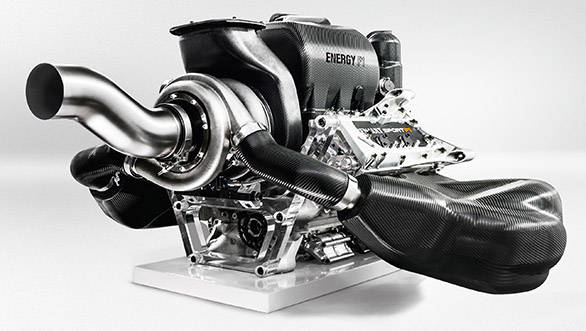 Since the introduction of the Kinetic Energy Recovery System (KERS) in 2009, the FIA has been searching for means to recover the energy wasted either due to braking or losses due to heat. And perhaps it is the 2014 season that sees a quantum leap in terms of Energy Recovery technology. The auto industry has been crying out loud for improvements in efficiency and recuperation of waste energy, and Formula 1 has also felt the need to adapt to the changing trends. Which brings us to the sea change in terms of engine technology in Formula 1.

The engine capacity has now been reduced from 2.4 litres to 1.6 litres, accompanied by the adoption of turbocharger, which hasn't been seen in the sport since 1988, the year of the legendary MP4/4 that won 15 of 16 races that year. While last year's engines produced approximately 750PS, this year the power units produce approximately 760PS (600 of which comes from the engine and 160 from the MGU-K system, explained later). While last year's engines were V8s, 2014 sees the introduction of the V6 engine, limited to 15,000rpm.

Also a very important factor that will form the backbone of this year's race strategies is the limit on fuel to be carried on board the car, i.e. 100 kg only, with a fuel flow rate not exceeding 100 kg/hour. This is down from last year when the cars used to carry approximately 160 kg of fuel. But don't feel disappointed, because from here-on things are taking a new turn. The new engine will be allied to a new ERS or Energy Recovery System, this being the game changer.

The power unit is now defined by 6 essential elements:

3. The Motor Generator Unit-Kinetic (MGU-K) or basically the KERS

Of the above, the last four form the basis of the ERS.

MGU-K converts kinetic energy (velocity of the car) into electricity 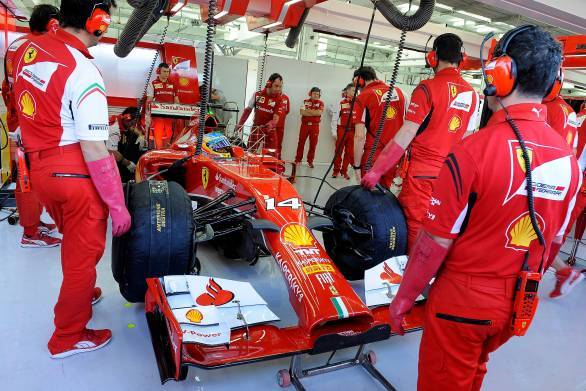 Ferrari made good use of KERS past seasons, it will be interesting to see how they use MGU-K this year

MGU-K is essentially the KERS system we are familiar with. This system consists of a battery pack and an electric motor (coupled to the engine output shaft). With a press of a button on the steering wheel, the ES (battery) powers the motor which delivers 80PS at the output shaft for around 6 seconds per lap. This extra boost was used by drivers to either avoid being overtaken by a car in the DRS zone, or to overtake a car at a strategic point on the track. During braking, the motor action reverses as a generator and it charges the battery. This year too we have a similar system, only with double the power (160PS) for approximately 33 seconds per lap and no push button for the driver to operate it (explained later). 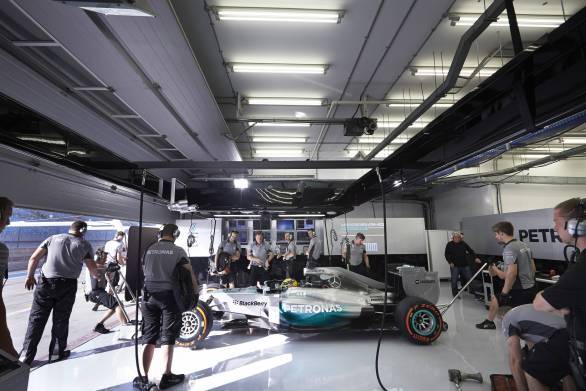 The new entrant to energy recovery system is the MGU-H. This is basically an electric motor coupled to the turbocharger via a shaft. It utilises the waste heat from the exhaust gasses via the fast spinning turbo into effective usage. For example, when the car is accelerating and turbo is spinning to its peak rpm, then it drives this motor, which acting as a generator charges the ES (battery). It has one more important function. When powered by the same ES as the MGU-K, this motor spools the turbo when the car has just started accelerating from stationary, thus effectively eliminating the turbo lag. Also when the car is accelerating out of the slow turn, the MGU-H can take the power again from the ES to spool up the turbo, this cycle will go on.

How MGU-K, MGU-H and ES will play their part, and why don't we need the KERS "push button" anymore 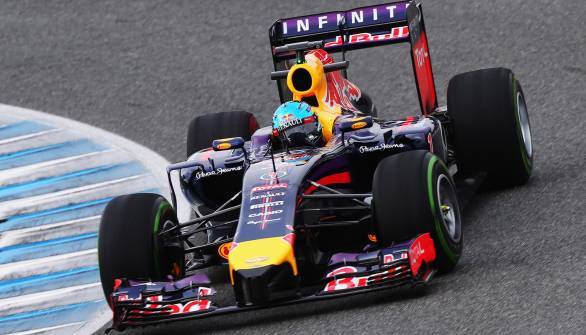 Red Bull are clearly struggling this season with their Renault powerplant

Now here comes an engineering challenge; the power flow to and from the MGU-K unit is limited. For example, the power flow allowed from ES to MGU-K is 4MJ per lap, but the reverse power from MGU-K to ES is limited to 2MJ only. In simple terms, if you use up all 4MJ of power from the ES (battery) through MGU-K, then you can recharge it only by half for that lap during braking. This is where the MGU-H comes into play, since it is allowed to have unlimited flow of power to and from its unit.

For example, when the car is accelerating, suppose MGU-K has used up all the 4MJ from the ES for that lap (since the car was trying to overtake another car or defending position), the MGU-H (which is driven by the turbocharger) will power the MGU-K (KERS) unit and also charge the ES with excess power. Hence the driver is not required to push the KERS button anymore to harness its juice; rather its flow will be controlled by the control electronics or the MGU for best efficiency from the system. So it is possible to keep the KERS ON always as long as the power flow from MGU-H unit to the ES and MGU-K is maintained properly. Again during braking, MGU-K can charge the ES for up to 2MJ of power, and the excess power can be transferred to the MGU-H for turbo spooling (plus the MGU-H can also harness power from the ES). As you can see, the efficient usage of this system will play the key role in maintaining race pace this season. This is in contrast to last year where, if the KERS units weren't functioning, it had a miniscule effect of the race pace of the car in question.

Less fuel to play with 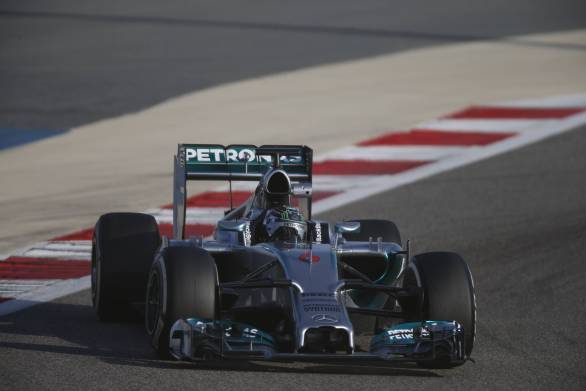 Since cars this season can carry only 100kg of fuel on-board, the efficiency of this system will play a major role in deciding the winner. Teams with less fuel efficient engines will have to make more use of this system during the race, compared to the cars with frugal engines, as to last the race distance. Also we may see drivers going pedal to the metal during practice and qualifying, but not during the race. So the winner would be the driver and the team who can manage all the above mayhem most efficiently

The minimum weight limit of the Formula 1 car for 2014 has also gone up from 642kg to 691kg. The extra weight will take care of the new components added to the engine. This is weight of the car without fuel.

The electric motor has the characteristic of delivering high torque from the off, and the drivers are already all praises about it during the pre-season tests. They have actually felt the higher torque from their cars compared to last year, especially during acceleration from slow corners. So lots of wheelspin is expected this season.

This year, teams are also supposed to select the gear ratio initially and use the same ratio all season for all tracks, unlike last year when teams were allowed to alter the ratios as per the characteristics of the particular track. ERS system will again come to the rescue and fill the torque gap, if the fixed gear ratio is not able to deliver it on that very track.

Braking on ERS will have an all new effect to the feel, so cars are employed with the brake-by-wire for the first time in the sports, this will take care of the surges and dwells from the ERS power flow that is bound to affect brake feel. 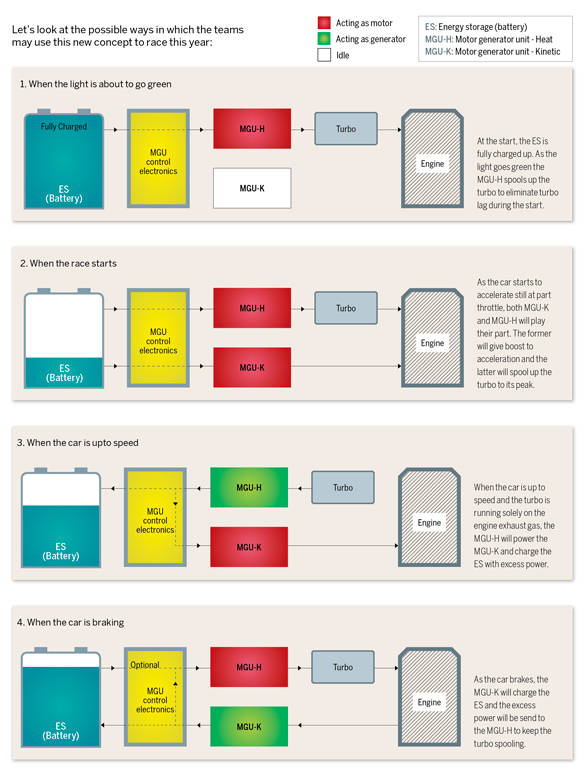 Critics of the sport already have a lot to say about the amount of technology made available to the driver at the moment. Questions are being asked. Will the heavy emphasis on technology dilute the essence of racing? Will it be more about managing one's own car rather than fighting with the others? Will more technology bring more complexity and less reliability? Will more cars be seen parked at the side of the track than racing with each other on it? The answers will be revealed when racing starts on March 16th, 2014.