It's only March, and the year 2014 has already proved to be quite an exciting one. Being an automotive journalist, I have over the years embarked on quite a few road trips near and far, but nothing compares to the geographical diversity of the places I've visited in the first quarter of this year - from snow-capped Himalayas to now sand dunes of Pushkar. 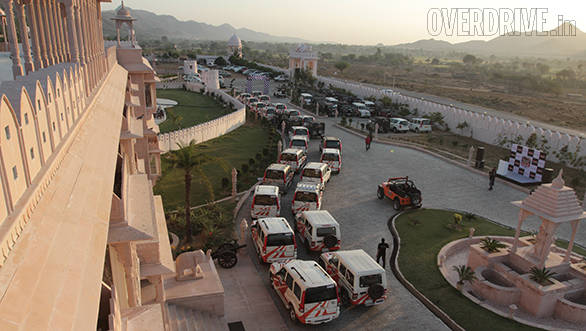 Mahindra 'Great Escape' brings together enthusiasts from around the country to experience different worlds with Mahindra SUVs. This includes exploring remote corners of the country, driving on challenging terrains, learning the nuances of off-roading and more.

I particularly look forward to the Mahindra Great Escape calendar because I like going for a slush fest without worrying about the vehicle or driving to the top of the world at Leh with a convoy of friendly people. This time around, I had the opportunity to visit the Thar desert in Pushkar, Rajasthan for what Mahindra unofficially calls the 'President's Escape'. 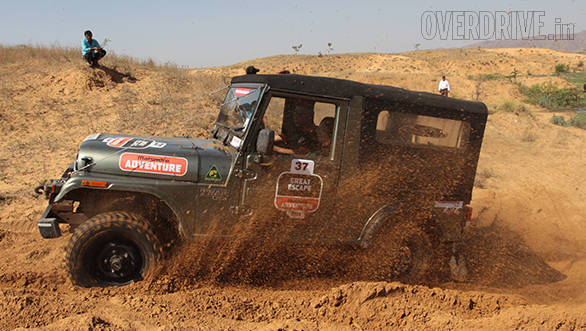 Unlike the other events on the Great Escape calendar, which involve owners of Mahindra vehicles paying a certain fee and participating, the President's Escape is more of a get-together for Mahindra's top brass and the company's local and overseas dealers, allies and suppliers. It is where everyone lets their hair down, quite literally, and indulges in off-roading fun. I hear that the sand-dunes of Pushkar aren't as extreme or picturesque as the ones in Jaisalmer, but from whatever I saw upon reaching the venue, they promised to be quite a handful.

There was the entire range of vehicles from Mahindra's Adventure arm to choose from - the Quanto, Xylo, Bolero, Scorpio, Rexton and Thar. I picked the Thar Legend as the location and the terrain seemed perfect for the old-school, no-nonsense off-roader.

It seemed like a poor choice to many  -- no air-conditioning in the Rajasthan heat, no power-steering, a very 'industrial' build quality with sharp edges and clunky sounds. But knowing how well the Thar Legend performed as our robust recovery vehicle at the Overdrive Winter Drive in Gulmarg,  I grabbed the keys to this SUV standing among its more luxurious and expensive cousins in the parking lot at the Bhanwar Singh Palace in Pushkar. The vehicle was rickety, the steering wheel would point towards left even when I would go straight and the engine was noisier than the entire crowd that had assembled for the event, but still it all felt just right for driving in the desert. Not to mention that the army-green paint stood out in the convoy for 50-odd vehicles painted in Mahindra Adventure's white and orange livery. 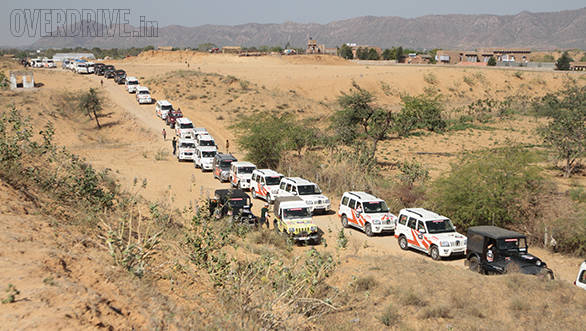 The President's Escape is more of a get-together for Mahindra's top brass and the company's local and overseas dealers, allies and suppliers

The convoy drove through a deserted land that stretched all the way into the horizon. To get some shots with all the cars together, Suresh made me stick to the fag end of the line-up. While he got his frames right, I was getting a bit fried waiting for each and every one of these vehicles to clear the hurdles before I could get a chance. In certain areas, the hold-up was so long that the organisers requested some of us to by-pass the hurdles and take simpler routes out. These alternative roads-less-traveled seemed like a walk in the park for the Thar. I decided to let the convoy be and escape into the desert to make my own road to the planned destination. 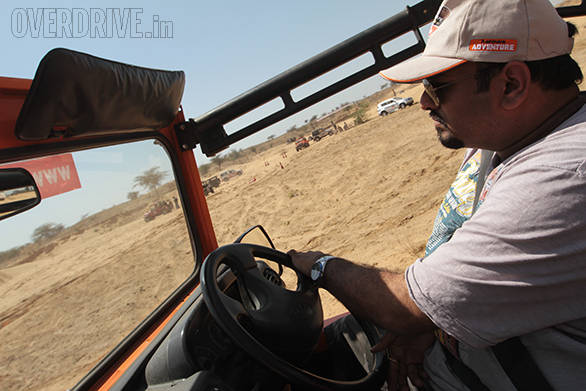 That is where the fun began. Tread marks in some extreme drops and climbs suggested that Mahindra's recce team had been there but had probably excluded the hurdles as they may have proved to be  too unkind on the Quantos and the Xylos. But Suresh and I decided to go for them anyway -- after all we had the luxury to send out an S.O.S to the souped-up, Thar-based recovery vehicles. 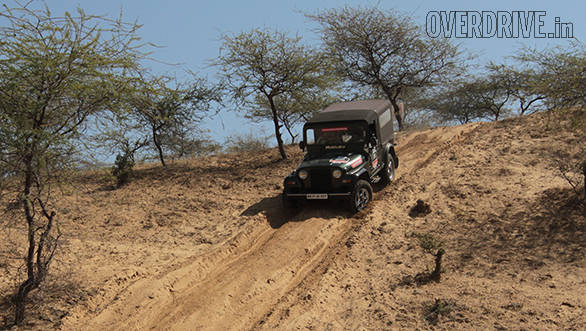 At a particularly steep descent, the bonnet of the Thar pointed skyward and the next moment it was staring down into the drop that was at least ten car-lengths

At a particularly steep descent, the bonnet of the Thar pointed skyward and the next moment it was staring down into the drop that was at least ten car-lengths. A combination of 4L (four-wheel drive with low gear ratios) and gentle dabs on the brakes was enough for the vehicle to reach the bottom of the descent without any drama. But the drop itself was so exciting, I was wondering how much fun it would be to try and climb up the slope. And since my vehicle had mountain-terrain tyres on it, I didn't really have to spend too much time in thinking about whether or not to indulge in such antics. As the slope was long, I had to ensure that the Thar built enough momentum to make the climb without running out of juice mid-way. Ideally it would have been better to carry the momentum in the second gear, but since the slope was quite steep and because my Thar wasn't in the healthiest of shape, I had to build and carry the momentum in the 1st gear itself. The Maxxis Bighorn tyres had no trouble swerving through the loose desert sand and the climb seemed quite effortless, if you can ignore the engine noise. I continued this dune climbing, the descents and the slides until I finally saw the rest of the convoy regrouping at the distance. 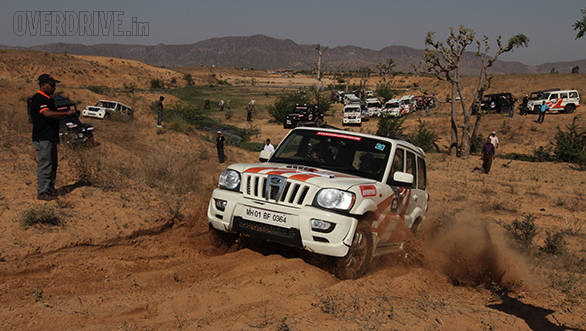 The moment Mahindra added a set path and a stop-timer to the mix, things got exciting

We joined the group for some auto-cross sessions in a pair of spruced-up open-top Thar SUVs. Driving through random cones placed around the ground seemed quite simple. But the moment Mahindra added a set path and a stop-timer to the mix, things got exciting! To shave off the times, everyone started pushing those SUVs - but with loose sand all over, the vehicles were sliding around considerably. The exciting bit was to find precise throttle control to make sure that Thar passed through the cones without knocking down any of them, while going sideways when tacking every bend. In fact, it was so much fun that Suresh packed his camera after a few shots and went for a couple of laps himself. This hoopla went on for quite some time. After the desert lost its serenity, all of us moved back to base to conclude the event. 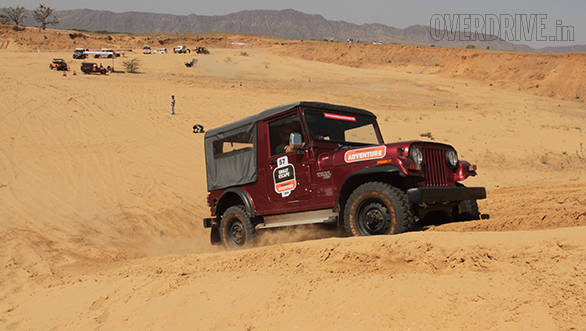 The Maxxis Bighorn tyres had no trouble swerving through the loose desert sand and the climb seemed quite effortless, if you can ignore the engine noise

As always, these events from Mahindra are a great way to escape from the mundane life that most you suffer from everyday. For me however, that small escape from the event managers' set itinerary gave me a day of good fun with a hardcore SUV in its natural habitat. Next time around, let's try some slush!