A lot has happened since the last update at 400km, and I am going to have to cherry-pick topics. A quick snapshot? The Ducati was ridden 3,500km to the racetrack and back. This was after the first service at 1,000km. After I returned, I added auxiliary LED lights, switched to the lower seat and then, I had a crash on it also. But one step at a time. In this installment, let's talk service and touring only. 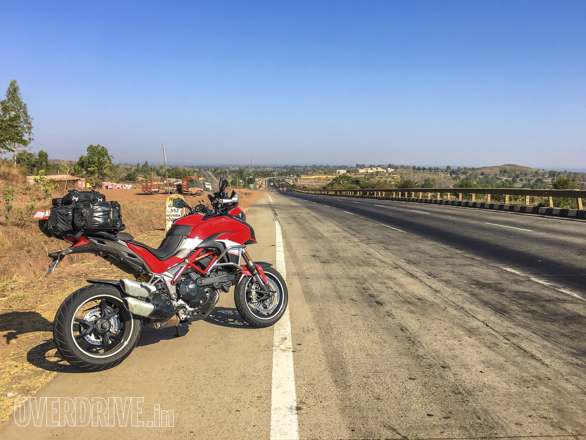 The Ducati Multistrada 1200 S pauses on the side of the highway somewhere far, far away from home as it races to 5,000km within weeks of starting its life in the OVERDRIVE garage

The Ducati Multistrada first service is a non-affair. The official list doesn't even include an air filter clean. On my behest, the cheerful mechanics at Ducati Pune happily spent the extra hour to get to the air filter -  a lot of bodywork has to come off before you can actually get to the air filter. That apart, the brakes and chain were cleaned and the bike was given a thorough clean-up. Then came the software part of the service, and an injector update was waiting. "It'll become smoother now, sir!" Really? How come? "The injector update always makes it smoother." And it did. Feroci ran super-smoothly after the service, and I am really, really kicked with how good and correct the Multi' feels on our roads. Then it was time to head to the racetrack. 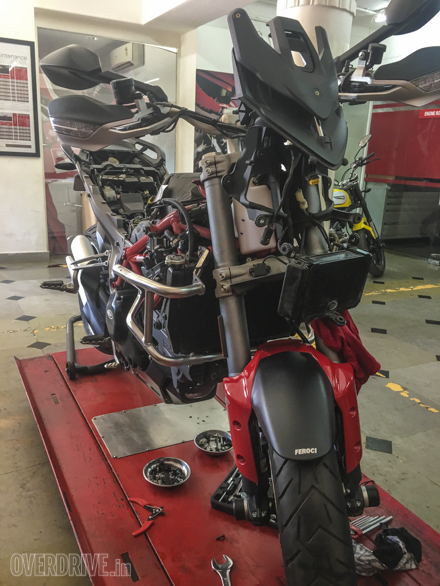 Stripped of its considerable bodywork, the Multistrada is a tall and skinny motorcycle. Almost a full transformer. But all that plastic also means working on it requires lots of screws to fiddle with

One of the advantages of large motorcycles is space. The Multistrada carried 60 litres of my Kriegas happily and that grab-rail unit at the back is impressive. It not only offers a versatile array of mounting points, it actually ate away at a Pelican-style case I had to mount on the bike for a shoot. Not even a scratch!

I did have issues, on the other hand, with the screen. With the tall seat, I struggled to find a ventilated but smooth riding position. On my return, I switched to the low seat and the screen immediately started working. When I raise it fully, I'm tucked out of the wind, save for the top helmet vents. I believe I need another run to somewhere far away to check this. Can I get some leave, Bert? Oh, and remember the 180km range I spoke about the last time? I managed a not-slow 320km stint and filled up with 60km of range left, according to the motorcycle. Wow! 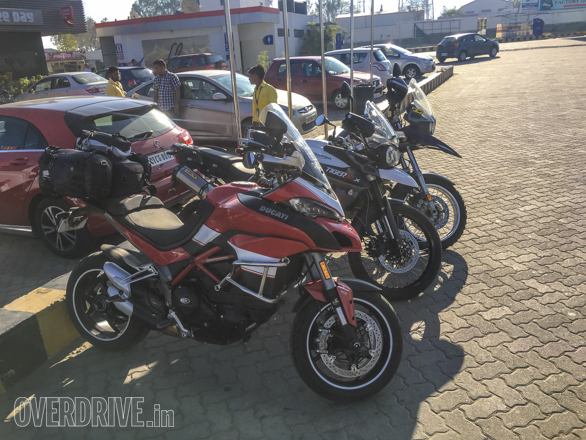 On the way to the racetrack, the Ducati was joined by a Triumph Tiger and the venerable, segment-starter, the BMW R 1100 GS

If you remember, I noted that there was some rear suspension play. The chaps at Ducati Mumbai re-torqued all the bolts, finding nothing loose, but the play has disappeared. But towards the end of my ride home from Coimbatore, the suspension went hard over the small bumps. It took me some time to figure out that the suspension was actually working. Changing or resetting riding modes would make it go back to the original feel. I reached home without a worry, that said.

At Ducati Service, this time in Mumbai, the technician who could run suspension diagnostics was not available on the day and after an overall check, the Ducati boys gave Feroci a complimentary post-tour bath. And the problem has disappeared. A knowledgeable friend of mine suggests  and this sounds right  that some dirt had collected in some sensor and that's why the glitch, probably. More washes for Feroci, then! 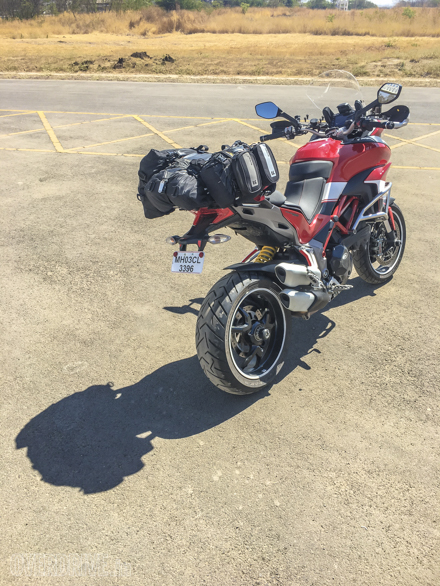 Since I don't stop much out on the highway, this is a shot of the Ducati Multistrada 1200 S with a full luggage load during my shakedown run

The Ducati has been spellbinding in its ability to commute in traffic and handle highway runs with the same level of poise and ability when ridden two-up with and without luggage. You just have to get the pre-load selection right  two button presses. Colour me very, very impressed. The next time? We talk about the lights and the crash.