2016 Le Mans: What is Balance of Performance and why did it matter so much this year?

Of the many things that I have seen in a motorsport weekend, I have never once been witness to tears even before a race has begun. Much less during a pre-race press conference. Which is why it was with some amount of shock that a room full of media people looked on silently, as Dr Frank-Steffen Walliser choked up during the pre-race press conference on the Friday before the 2016 24 Hours of Le Mans. Dr Walliser, the Head of Porsche Motorsport, was on stage speaking about what the Porsche team could expect from the race. When he came to the point of Balance of Performance, however, he found it hard to continue. He said "We all know we need BoP, it's important and relevant for the sport. It enables GT racing, but we do not need this kind of BoP." 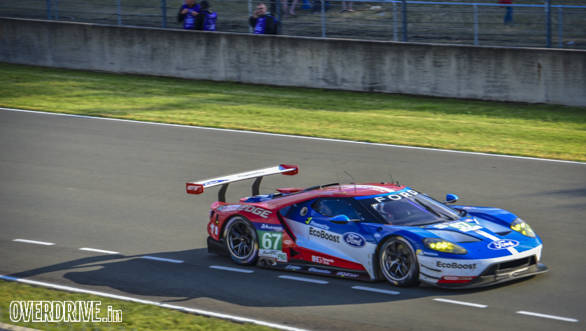 For those wondering, Balance of Performance is a means of levelling the playing field in GT3 and GT car racing in general. The idea is that when you have a whole host of completely different manufacturers, with cars that differ widely in terms of specification, you can equalise the grid to a certain extent to ensure that it isn't simply the most powerful car that wins. BOP is achieved by either adding weight to cars, limiting the size of the restrictor on the engines, and, in some cases, also altering the wing height of a car. Which means that several different types of cars can go racing together and give fans some close racing, without the grid breaking up and the more powerful, lighter cars running off at the head of the order, and the less powerful, heavier cars pottering around at the back of the field.

However, at the 24 Hours of Le Mans this year, things took a different turn. During the test day on June 5, it seemed quite clear that Porsche was in terrific form. They lined up second and third in the timing sheets in the GTE Pro category, with No.92 911 RSR leading the No.91 911 RSR. It was Corvette on top though. Ferrari and Ford posed a threat, but a manageable threat it seemed from their pre-qualifying performance.

Then came the qualifying sessions for the big race. When the sessions ended this was the result in the GTE Pro category - the No.68 Ford led the No.69 Ford, then came the No.51 AF Corse, then the No.67 and No.66 Fords, followed by the No.71 AF Corse and the No.82 Risi Competizione. The best of the Porsches, the No.92 qualified eighth in class. The second No.91 Porsche was down in tenth place. And it wasn't just that Ford and Ferrari had leapfrogged Porsche and everyone else. It was the manner in which they'd done it. Ford was 4.8 seconds quicker. Ferrari was 4.3 seconds quicker. That pace over a 13km track over 24 hours? The outcome seemed obvious, and inevitable, even before the race began.

So just how had Ford and Ferrari pulled this off? Well, the answer is simple really. And it's the oldest trick in the book. Don't show your true pace until the racing begins - commonly called 'sandbagging'. Which means that the organisers can't stick you with BoP penalties.

Well, they didn't quite get away with it entirely. Dr. Walliser's teary pre-race appeal - "This is definitely not what is expected and we trust, as we do always, that the officials will take all the right measures within the next hours to rebalance again and that we can" - had some effect. The Fords were all given an additional 10kg of ballast, taking their weight up to 1248kg. They were also slapped with a removal of boost pressure between 4200 and 7000 rpm. The Ferraris were given 15kg of extra ballast. While the Corvettes, Porsches and Aston Martins received BoP changes that were meant to help them along.

When it was time for the race, though, there wasn't much anyone could do to stop Ford. The No.68 Ford Chip Ganassi Racing Team GTE, piloted by Joey Hand, Dirk Muller and Sebastien Bourdais won. Their No.69 car, with Ryan Briscoe, Richard Westbrook and Scott Dixon behind the wheel, finished third. Ferrari spoiled things a little for the GTE squad, with Giancarlo Fisichella, Matteo Malucelli and Toni Vilander finishing second. That all-Ford podium (50 years after the Ford GT40s locked out the Le Mans podium in 1966) wasn't to be. It's interesting to note, however, that appeals and counter-appeals meant that the ACO took the trophies back after the podium ceremony was over, and added time penalties to the various podium finishers, for this and that infringement. But the ultimate result was unchanged.

Even without the BoP fiasco, however, Ford's Le Mans comeback was not without controversy. There have been people questioning the fact that the Ford GT was allowed to compete in the GTE class of Le Mans to begin with. Typically, the GTE class is for production-based racecars. Since the Ford GT hasn't gone on sale yet, it didn't really qualify to compete in the 24 Hours of Le Mans to begin with. But, the fact remains that it did. Why? There's no point speculating, although it's not really surprising that attracting more manufacturers into the sport is sometimes very enticing for the organising body that runs the sport. When a manufacturer is also able to claim that they won 50 years after their first win at Le Mans, it sounds even better. Headlines get splashed around, the global interest in the sport grows. But at what cost, if loyal fans and true supporters of the sport are left with a bad taste in their collective mouth?

What of the two Porsche GTE Pro cars then? The No.91 Porsche had its radiator punctured by a rock, which led to an engine failure. The No.92 Porsche retired with a broken front right suspension. At least they'd done what Dr. Walliser had promised they'd do - "We will fight. We will fight," he'd said at the press conference. And fight they had.

That still didn't change one thing though. The "kind" of BoP that Dr. Walliser had spoken of. So does Balance of Performance need looking into? Yes, it probably does. It's a feature that's meant to make racing fair and closer than ever before. But the need of the hour is to come up with a solution to prevent cheating the system. One way could be if each organising body had an official test driver with loads of GT car racing under his belt. Get him to test each of the cars on the official test day, and use his average time as a reference before BoP penalties are doled out. It's just one solution towards controversy free racing.

Will next year's Le Mans be cleaner? The damage, to an extent, has been done. One can only hope that lessons have also been learned.