The above question is probably one of the most common ones today  be it your smartphone or motorcycle, manufacturers are constantly updating products to ensure they're always at the forefront, delivering the best possible technologies and equipment to buyers. I'm sure a lot of current owners of the Tiger 800 in India would be wondering whether or not it makes sense to trade in their bike for the thoroughly refreshed 2018 version. In fact, even as I write this article, I've already got a phone call from a friend who currently rides a Tiger 800 XCX! Let's face it  being a middleweight adventure tourer the Tiger 800 is perhaps the right sized motorcycle for most of us  the 1200s are too big, too heavy and goes without saying, too expensive. 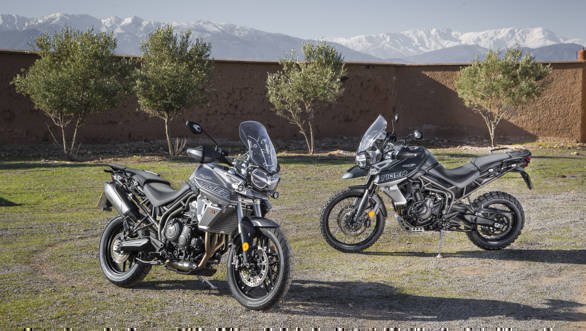 The Tiger 800 thus is the ideal motorcycle  in fact it bettered two 1200s and one 1000cc adventure tourer when we took them all to Ladakh for our 19th anniversary issue last year! I also know the fact that almost all Tiger 800s on our roads today are being ridden extensively by owners  be it for off-roading or touring. And its 2018 version is indeed a significant upgrade over the existing motorcycle. Which brings me to the question. Upgrade, or not?

Let's break it down. Just like before, Triumph has split the 2018 Tiger 800 family into two  the road-focused XR line and the off-road focused XC line. Of these, the most likely to make it to India are the base XR followed by the XRX. The XRT is unlikely to be sold in India given its higher pricing and relative lack of demand for a fully-kitted road-biased adventure tourer. On the other hand the updated XCX and XCA will both be on sale in India, just like before. 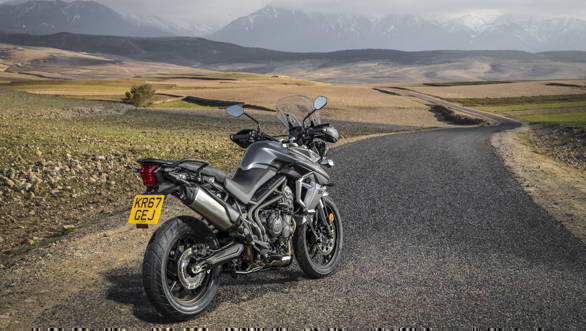 The base XR variant of the 2018 Tiger 800 has not gained significantly in terms of equipment but does get the updated engine, gearbox and exhaust system

Let's break it down further, going by the families. The 2018 XR doesn't gain too much in terms of equipment over the current version. It misses out on the new full-LED headlights and the new coloured TFT display, and continues to use the same digital-analogue instrument cluster. While it does get ride by wire, just like before, the base XR still doesn't get multiple riding modes. The engine is now tweaked with minor revisions to make it smoother, but more importantly the 2018 bike features revised gear ratios that improve torque delivery across the rev range, while the engine itself revs quicker. So the major upgrade for the XR is the new and improved powertrain.

Another value addition is the option of heated grips on the new XR. The 12V socket is standard like before, while a new addition is the USB port underneath the seat. On the ergonomics front, the handlebar on the 2018 bike has been moved closer to the rider by 10mm to offer better reach while the seat uses a new compound that makes it more comfortable. Not to forget, the exhaust system has also been updated for 2018 and the new exhaust is lighter, freer flowing and better sounding. 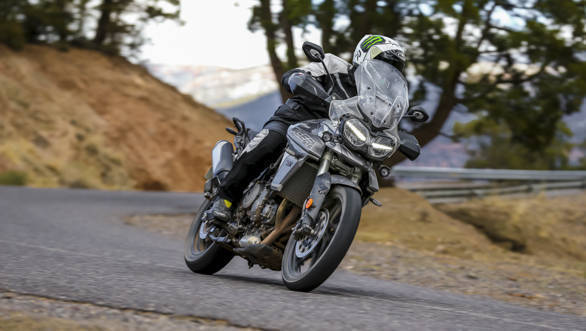 The 2018 Triumph XRX boasts higher equipment levels than the current bike, including the new screen and wind deflectors, as also LED DRLs and the new TFT display

Let's move on to the XRX. It now features four riding modes (Rain, Road, Off-road and Sport) in comparison to the three the current XRX offers (Road, Off-road and Custom). The new XRX also gets the new 5-inch TFT display, along with the five-way joystick on the left handlebar. It gets only one theme for the display along with three different styles though, for viewing the speedometer, tachometer and gear indicator. The screen can also be angled to suit riders of varying heights to offer maximum visibility. Even the XRX misses out on the full-LED headlights, though it does get LED DRLs. It also gets cruise control, now with the revised controls on the left side handlebar.

The base XR gets a fixed screen like before, but the XRX and all variants above it (XRT, XCX and XCA) come equipped with the new, adjustable screen that can be adjusted manually with just one hand and gets five positions. All variants except the XR also get the new wind deflectors to channel air away from the rider. While the XR doesn't, the XRX features an updated braking system from Brembo, which Triumph claims offers improved braking performance. That's a long list of upgrades, and in our opinion if you ride the Tiger 800 XR or XRX currently, the new XRX is worth considering if you are looking for an upgrade. 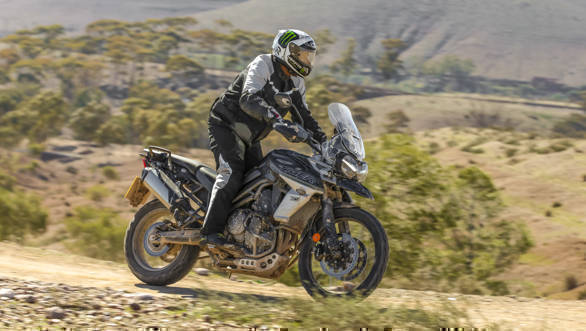 For 2018, the Triumph also gets the new, Off-Road Pro mode that turns traction control and rear wheel ABS off

Let's move to the other end of the spectrum, the XC line-up for those who also like to ride off road. Equipment levels on the XCX are similar to the XRX as it gets the same TFT display, windscreen with deflectors and more, which means the bike will be a worthy upgrade for current XCX owners. The XCX also gets the same engine and gearbox upgrades, as also new, lighter exhaust. A significant addition is the over the current bike though is the new off-road pro mode that switches traction control and rear ABS off to offer better control when riding off-road without any intervention from the electronics. Just like the XRX the XCX also gets LED DRLs but misses out on full-LED headlights.

Coming to what is expected to be the top of the line variant for India, the XCA, we know this will be the fully-kitted out version with all the bells and whistles. So you get full-LED headlights, the 5-inch TFT display with two different themes and a total of six display styles, backlit switchgear as also a sixth additional riding mode, Rider (apart from the Rain, Road, Off-Road, Sport and Off-Road Pro modes), which lets you customize everything. In addition to the heated grips that the lower variants offer, the XCA also gets heated rider and pillion seats as standard. 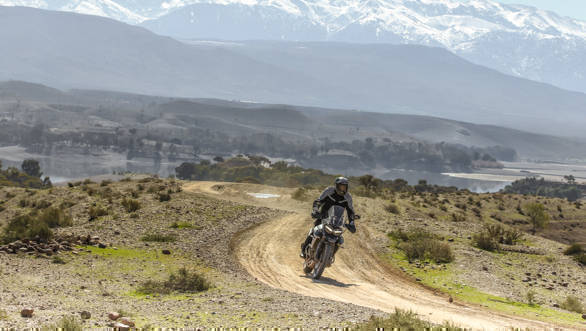 If you like riding off-road and ride the current version XCX or XCA variants of the Tiger 800, the 2018 XCX and XCA versions are worth considering to upgrade to, given their higher equipment levels as also the revised engine and tranmission with the shorter first gear

To sum it up, if you own the base XR version currently and want to upgrade, the XRX makes great sense with its higher equipment levels. Similarly, for those riding the XCX or XCA currently, the 2018 XCX and XCA variants do make sense, since despite the 2018 bike not being all-new Triumph has updated equipment levels significantly while also making the powertrain better. The underlining fact here is that Triumph has effectively brought its smaller Tiger 800 closer to its flagship adventure tourer, the Tiger 1200, in terms of specification and equipment levels, thus upping the game in the middleweight adventure touring space. Do keep in mind that prices are expected to be revised, and given the higher equipment levels the 2018 Tiger 800 will cost slightly more compared to the current bike.

To read how the 2018 Triumph Tiger 800 is to ride on road and off it too, read our first ride review here.