Finally! That's the only word that's running through my head right now. And I suspect it's the same word that's running through Gaurav Gill's head at the moment too. See, back in November 2017, Gaurav Gill won his third Asia-Pacific Rally Championship title. At that point, Indian rally fans, and I daresay some rally enthusiasts abroad, found themselves wondering just what Gill had to do to make it to the big(ger) league. He'd more than proved himself behind the wheel of a proper rally car, not only winning rallies, but championship titles. He'd had the measure of former WRC drivers in the APRC, and he'd beaten some illustrious team-mates - drivers both fast and young - from Europe. Some of those drivers had, since graduated to WRC themselves, which, as you can imagine added to the frustration of those who wanted to see Gill rallying in Europe. At least in the WRC 2. So, yes, finally! 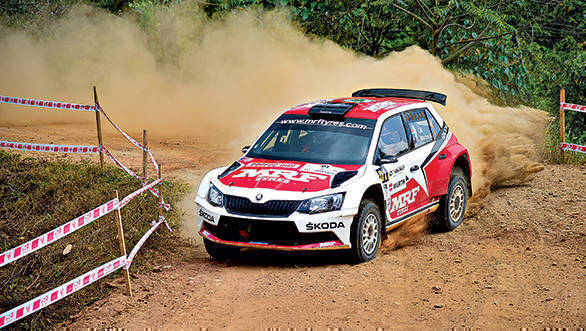 "I can't wait to get in the car and go flat out!" Gill says of his switch to rallying in the World Rally Championship's WRC 2 category. His long time sponsor, MRF Tyres, whose rally arm Team MRF backed him to those three APRC titles, and have in addition another six APRC titles with other drivers, will now field a one-car team, with Gill their only driver, in the World Rally Championship. It seems like the team is being cautious, with how they are approaching this switch to rallying in Europe. Since four rallies have gone by though, the team will not register for the full season of the championship. WRC 2 regulations state that a team that isn't registering for the entire championship is free to compete on tyres other than the official WRC tyres (DMACK, Pirelli, Michelin). Which naturally means that Gill will be rallying on MRF tyres. "We're going to run only on MRF tyres, and our aim is to collect a lot of data and do R&D," Gill says. In 2019, however, the team will take the next step. "In 2019 we'll register for the full season, and do the entire season 2019 onwards. We're looking at a long-term programme," he says, before elaborating on the type of testing that they will carry out. "Each rally will be at least 350 km of stages. And prior to each rally we're trying to do at least 50 to 100 km of testing. We're going to try to get test mileage, data, evolve our tyres and do a lot of R&D on our tyres," he says. Data collection and R&D in the remaining rallies of 2018, and entering the championship in 2019. It's hard not to put two and two together and come to the conclusion that MRF plans on becoming an official tyre supplier for the WRC in 2019, if they manage to homologate their tyres for the championship. However, when asked, Gill refused to comment, saying his focus is on learning the rallies in 2018. 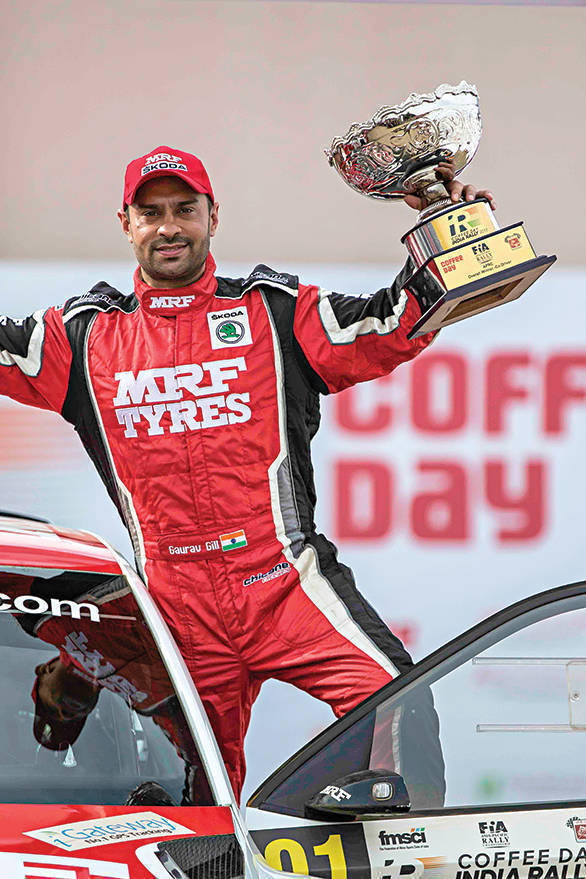 As is already in evidence, all through our conversation thus far, Gill has been reluctant to answer certain questions, insisting that there will be another press release that will follow perhaps in a week, ten days, certainly by the end of the month. When pressed, however, he says that Team MRF is not going to compete in tarmac rallies in 2018 (which makes sense given that MRF manufactures gravel rally tyres). This eliminates Rally Germany, and possibly also eliminates the mixed-surface event that is Rally Spain. However, this will still leave the team with rounds in Portugal, Italy, Finland, Turkey, Wales and Australia.

Time is short, though, and if we're to assume that Gill will make his debut at the World Rally Championship round at Portugal, which is between the 17th and 20th of May, it means that he must be quite close to finalising the machine that he will pilot in the championship. "I can tell you that we're not going to drive a Skoda, but I can't tell you what we're going to drive for another ten days," Gill says. "We're doing product R&D," he continues. All signs seem to point to the fact that Team MRF will want to collaborate with a manufacturer that has some sort of presence in India, which means that Gill is most likely to pilot either a Ford Fiesta R5 or a Hyundai i20 R5 in the championship. But, at the time that the May 2018 issue of OVERDRIVE was going to press, Gill refused to comment. Since then though, he's showed up at a Ford event, which gives us some idea of what car he will pilot in the championship. 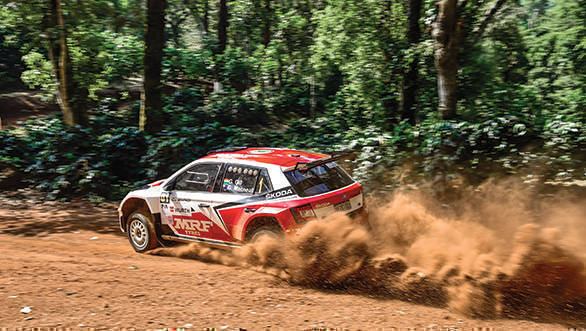 Back in 2016, when Gill had just won his second APRC title with victory at the India Rally in Chikmagalur, rounding off a perfect season in the championship having scored six wins of six rallies he competed in, he spoke to me of the importance of knowing the machine that you're driving. With the move to WRC2, and the fact that he will no longer drive the Skoda Fabia R5, with which he had won his last two titles, he no longer has the advantage of knowing his car. But it's something he seems to be taking in stride saying, "I don't think it should make a very big difference, because usually R5 cars are quite similar. We're looking at similar technology and similar regulations from the FIA, so it's not going to be a massive difference. Of course, it will be different from the other car, but I'll continue to be what I have been all my life." By this he means he'll continue to adapt - he'd once told me that his mantra was "Evolve or go home." He echoes this sentiment, saying, "I don't really care what I have, as long as I have a steering wheel and a rally car! I'll adapt to the situations. I keep adapting to situations and the cars that are given to me. I'll continue to do that again." This might involve having to adapt to a new co-driver, given that Stephane Prevot has already signed up with someone else for the season, although he might do one off events with Gill in 2018. There's also the possibility that his former co-driver Glenn Macneall might partner with him once again. But, as he says, there is some uncertainty for now.

Two years ago, Gill had also said, while speaking of what it was that made him the driver that he is, "Discipline, passion and commitment are my three favourite words." There was no question of his commitment to the sport or his passion for it. But the discipline - the sort of discipline that leads one to three championship titles - came with time, born, perhaps, out of necessity. "I never had the option of doing 25 rallies a year, or practicing every weekend, the way others do. I would get six chances a year, most of them without testing. So shakedown would be literally when I'd first drive the car," he says. And to make up for the lack of miles, and lack of seat time, Gill would train himself, pushing himself to the maximum, admitting, "I've been very hard on myself." Over the course of his career, he's driven against some fast drivers, and he's had some fast team-mates, but being pitted against such talent has had a huge positive effect on him. "For me it's been a struggle, all my career, to match the best drivers. But being up against them has really pushed me and made me develop this new feeling, or this power that I now generate. I just sit in the car and I switch myself on and I can go flatout in the first corner. Mentally I've trained myself to do that," he says, adding, "I'll continue to do that because I hope next year we will do more than six or eight rallies, but I cannot comment or commit to that right now. But whatever is happening is great and I'm really excited." 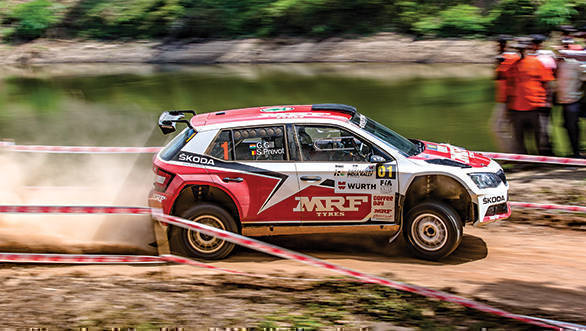 For Gill, the switch to rallying in Europe (where he has had little experience save for three rounds in the PWRC championship spread over the course of 2008 and 2009) has been a long time coming. "I knew my speed for the last couple of years. But I wanted to make sure that we have an Indian team, or an Indian supporter in MRF, because they gave me the chance several years ago. Because of them I was able to show my talent, and show myself for who I am. So I'm happy that this has come in a positive way where MRF, after 10 years of partnering with them, is again my partner."

That being said, the thought of driving in the WRC 2 doesn't phase Gill in the least, especially because he's quite clear that he's using 2018 as a year of learning, making sure he knows the rallies, and attempting to get clean pacenotes that he likes to future proof for all types of weather and all eventualities. But there's still some amount of confidence there. "I really always wanted to be in WRC, because I felt I could drive amongst and against those drivers. And I think you guys will also not disagree with me on this." No sir, we wouldn't dare!

The early years
Gaurav Gill learned to drive at the tender age of 10, getting behind the wheel of his childhood friend Rishi Choudhry's car. He also stole the keys to his mother's car at the age of 10 taking the car out when no one was around, and only got caught when his parents noticed the fuel tank was getting empty rather quickly, and the numbers on the odo were increasing rapidly. But when they discovered that he, by then, was really quite good behind the wheel, he was allowed to drive on private land under supervision. Which meant that he was drifting by 13 and by the time he was 15 he could go sideways properly. 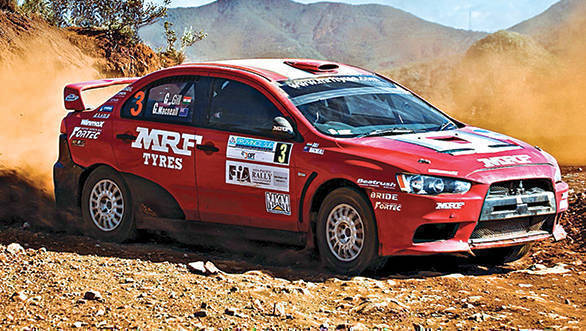 His first competitive outing was at the age of 16 in an autocross event in Chandigarh, where he drove a Maruti Esteem with bald tyres that was on loan from his uncle's friend, who had in fact handed his girlfriend's car over to Gill. At the event, young Gill set the fastest time, but wasn't awarded victory because he had touched a cone on the course. But then INRC star Nikhill Taneja, who won the event, called Gill onto the stage and presented him with the trophy, later saying, "He was phenomenally fast, and I really thought he deserved the trophy." 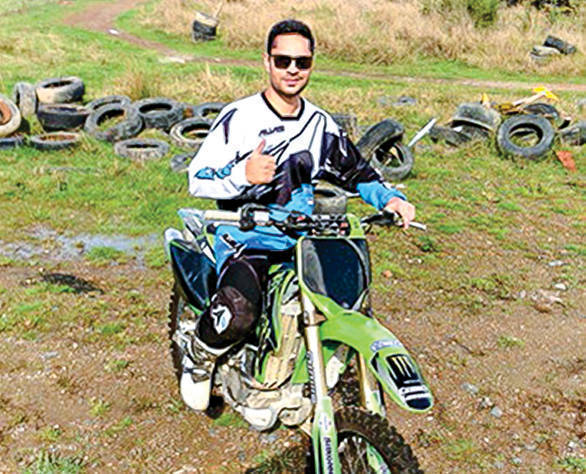 Even though Gill wanted to start rallying professionally at 16, he was still two years away from getting his licence. So he took to competing in motocross events instead. He'd quit motocross after a bad accident in 2005. He then switched to racing cars, winning the Formula Maruti Championship in 2004 and the Formula Rolon Championship in 2006. By then, after a thorough test in front of Karamjit Singh, he'd already been inducted into the JK Tyre rally team. In 2007, he competed in his first international event with MRF in the APRC. In 2008, he took his first APRC win at the Rally of Indonesia. The rest, as they say, is history.