When we are talking about three men driving fancy cars at different exotic locations around the world, it is obvious that we are talking of the most popular trio - Jeremy Clarkson, Richard Hammond, and James May. In addition to testing some of the most distinct automobile specimens, these three have also entertained us with their wit and humour. You have already seen them do their best in the first season of The Grand Tour. However, get ready to see a lot more of them in the Amazon Prime Original The Grand Tour Season 2 which airs from December 8 onwards.

Considering that this the second season of Amazon Prime Video's global hit show, the makers have made it even grander than before. This can be seen with the different shooting locations that include Mozambique, Dubai, Spain, Switzerland, Colorado and New York. The promos reveal that, among the cars which will be featured in Season 2, are the Ariel Nomad, Bugatti Chiron, Kia Stinger, McLaren 720S, Mercedes W123, Nissan Frontier and the all-electric Rimac Concept One supercar.

The first episode of season 2, which is now live on Amazon Prime Video, has the three men test the past, the present and the future. Jeremy Clarkson, representing petrol heads, is in a Lamborghini, James May opts for a hybrid Honda, while Richard Hammond drives a 1,241 horsepower Rimac straight over the edge of a cliff and rolls down 300ft. By the time he gets out, Hammond has busted a knee and his car is engulfed in flames. So a spectacular start to what promises to be an exciting season. 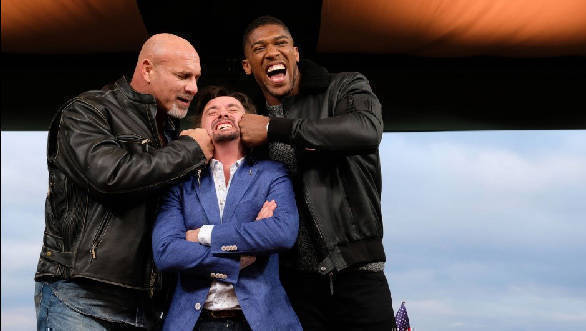 This time around the celebrities who will eventually make it to The Grand Tour Season 2 will be pitted against each other, depending on how they are connected to each other. These celebs will compete with each other to be the fastest around the new track. The makers have already confirmed that some of the guests who will be a part of this show include Luke Evans, Kiefer Sutherland, Hugh Bonneville, Kevin Pietersen, Dominic Cooper, Dynamo, Rory Mcllroy, Michael Ball and Alfie Boe. The first episode will see a battle between David Hasselhoff (Baywatch, America's Got Talent) and Ricky Wilson from The Voice UK. And it's not just actors, as World heavyweight champion Anthony Joshua and professional wrestler Bill Goldberg were seen filming for one of the episodes of The Grand Tour's 'Celebrity Face Off'. 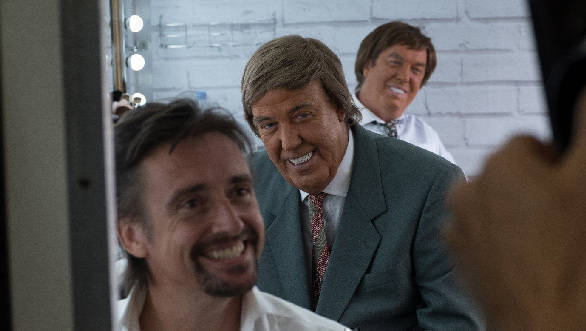 If you thought Jeremy Clarkson, Richard Hammond, and James May are way too British when it comes to the way they talk and present the show, you are in for a surprise. The trio will make an attempt at being more American for the second season of the Grand Tour. And to do just that, Jeremy and James are seen fooling around with wigs, tanned faces and white teeth - all of which tries to make them more American, right?

The first season was a launch vehicle for the Grand Tour and it entertained millions of people out there. In the second season, the adventures of these three popular men seem to have gone to a totally new level. While we can go on blabbering about how 'cool' the new season looks, here is the promo video of Season 2. We recommend you also follow the Grand Tour on Facebook and Twitter to get all the latest news about the GT S2.

The second season of most popular automobile show on the internet will be available exclusively to Amazon Prime members. If you aren't a member already, what are you waiting for? Click here and subscribe now!