Ananth Shanmugam on his love for racing

"I like the feeling when I race. I like that I get to compete in something that has four wheels and a motor behind me with some 20 other crazy people, so that was the first good feeling I had." I listen to Ananth Shanmugam speak with rapt attention, as he describes what it's like to race and what he feels when he races. He is only 19. 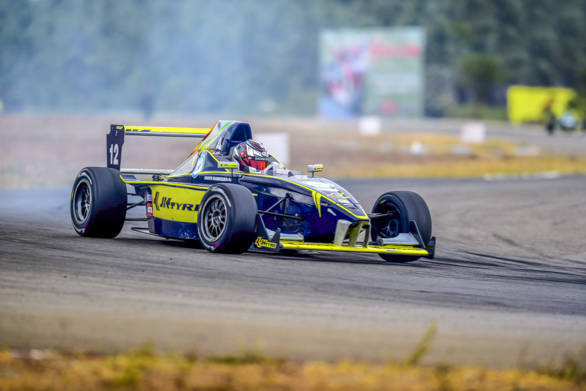 Ananth has had a pretty short, yet successful career so far. And given the paltry number of races he's participated in, relatively speaking, Ananth has displayed impressive skill behind the wheel.

At the recently concluded Round 2 of the 2016 JK Tyre National Racing Championship, Ananth won two races in the Euro JK 16 series on Day 1 and finished a close second after a tough battle with championship leader, Nayan Chatterjee, on Day 2. When you consider the fact that Ananth is racing against drivers with far more race miles under their respective belts, you can't help but notice the youngster's sheer talent. 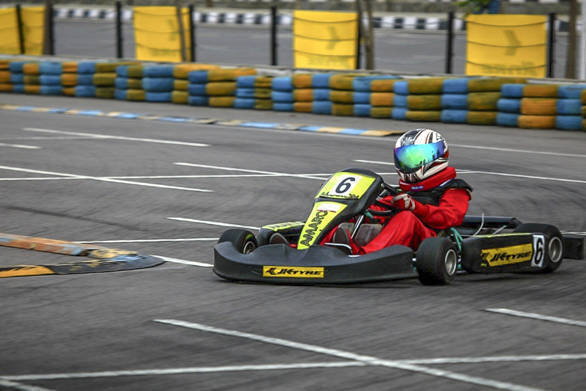 He's been surrounded by stories of motorsport, right from the time when he was a kid. To keep him occupied, his parents used to buy him car magazines, and he loved reading the motorsport section in particular. He loves cars and looked at motorsport as an extension of cars where people raced them. His knowledge of various racing series around the globe, when he speaks about them, simply blows you away. Getting into racing, however, happened at a much later stage in his life. "I got the realisation a bit late because when you are young, you don't know the whole world around you. How things that seem small to you; how there might be an entire industry behind it," he says. 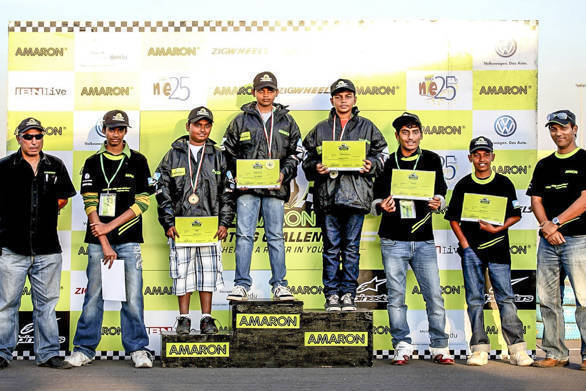 In 2011, he came across a newspaper advertisement, stating the Amaron Karting Challenge was in town and he decided to give it a shot. He finished seventh in the national finals, which caught the attention of Meco Motorsports head, Akbar Ebrahim. He was invited to participate in a Rotax test at the Kari Motor Speedway in Coimbatore.

That was a completely different ball game. Thinking that four-stroke karts were all there was to karting, the two-stroke karts scared him initially. "I still remember my neck being tossed back. The amount of torque in the two-strokes was overwhelming. I was frightened."

His father, Ponnambalam Shanmuganathan, was with him and encouraged him by telling him a small lie! He told Ananth to go faster and even if he'd crash, he wouldn't get hurt. Ananth at that point thought, "Well, why not?" He kept pushing and kept setting faster lap times that day. Later that day he crashed but that was due to a loose bolt and not a driving error. That drive and his dad's teeny-weeny lie gave him a lot of confidence. 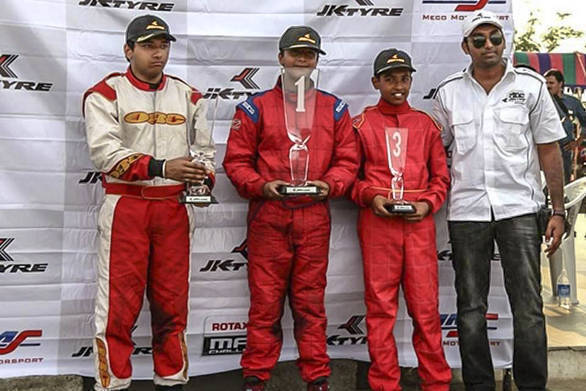 Later that year he participated in the JK Tyre National Rotax Karting Rookie Cup and finished third overall in the championship. It was an eye-opening experience for him as he witnessed the time and effort spent on going even one-tenth faster than a competitor.

It was in 2012 when he realised whether or not he was good at it, racing was what he wanted to do. And he was prepared to work hard towards it. That year he participated in the JK Tyre National Karting Championship, which was a steep learning curve. He was competing with the likes of Kush Maini and Krishnaraj Mahadik, national-level racers who'd established themselves.

Ananth struggled through the year, and found that being too self-critical was not helping him. He had to work towards keeping himself calm and focus on enjoying what he was doing. "I learnt quite a few things about myself. It's one of the best things you get out of racing. You get a lot of personal development out of it." 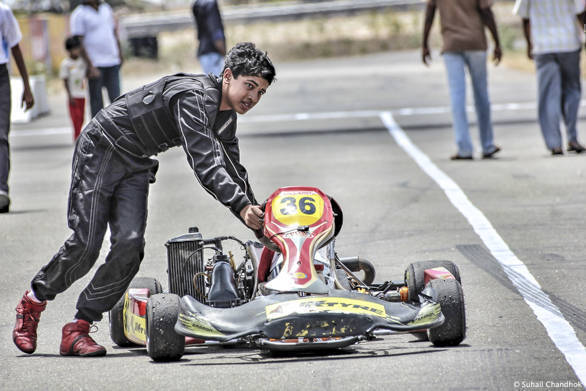 In 2013, he got a chance to race in the FB02 (now Euro JK16 with more powerful cars) category of the JK Tyre National Racing Championship at the final round at the BIC. That was the time when he learnt what aerodynamic grip was all about. He was slow initially as he couldn't wrap his head around the fact that he had to drive faster to generate more grip. As the weekend progressed, he was 4 seconds off the pace and tried hard to end up shaving a couple more. In this quest to improve, he ended up crashing, denting his confidence. Understandably, he was dejected and felt that he could not drive the car. That put him in a negative spiral for the rest of the year.

When 2014 arrived, his family was set to move to Singapore as Ananth enrolled for an aerospace engineering degree at a Singapore university. That's when Ananth thought that he might not get a chance to race that year. It's the feeling when you are about to lose something that makes you value it a lot more. "There's a saying that you are only as good as in your last race, and I was 2 seconds slower in my last race. I wondered if that was only how good I was. It left me with a lot of thoughts and unanswered questions. Will I race ever?"

His fears, however, were quelled when Akbar Ebrahim invited him to participate in the 2014 season of the JK FB-02 championship. "I was like, really? After knowing how badly I performed in the last race?" He questions that call even now. He was not fast immediately, but the will to prove himself saw him improve with each lap. 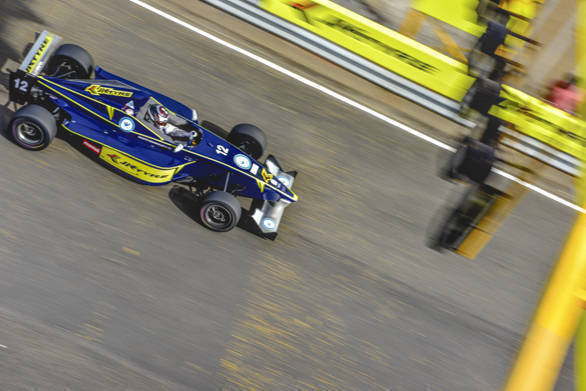 Ananth attributes his form today, to the fitness regime he follows. He is aware that having an edge over the others in this department will help immensely when he has to push for 15 laps. After moving to Singapore, he's had fewer chances to race. Nevertheless, he keeps working out to ensure he is fit to race, even at a moment's notice.

When I asked him if he thought he was at a disadvantage since he does not get a chance to race often, he said, "If you focus on disadvantages, you'll end up giving yourself excuses. I know the car, the track and the team so that reduces the unknowns. However, within the first five-six laps I'm up to pace, so it's not much of a disadvantage." 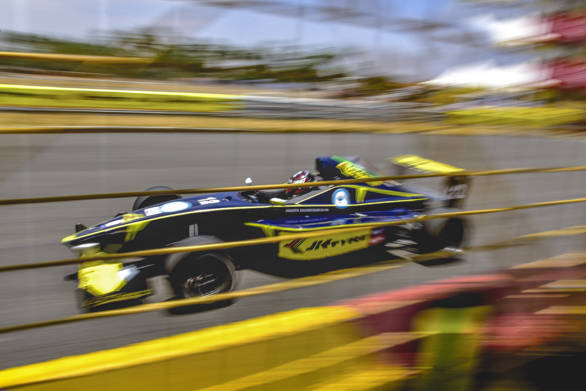 He got the fruit of his hard work when he clinched his first win in the second round of the FB02 class in 2015. That was an epic race, he recollects, as he managed to keep a hard charging veteran racer Vishnu Prasad at bay for eight laps. At the next round in Delhi, he won the race by an astonishing 11 seconds to P2. Later that day Karun Chandhok came up to him and said that it was a great drive and he should try racing abroad.

Ananth has had the opportunity to do that but he learnt other aspects of motorsports while he was there. He was invited to drive in the Porsche Carrera Cup Asia Challenge in China and that taught him something new. He was amazed at the punctuality and the professionalism with which the event was conducted. It didn't go too well though as he struggled to handle the 500PS, rear-wheel drive, Porsche Carrera GT3 RS. "But I learnt a lot," he says.

His father seconds this and says that he is happy to see what motorsports is doing for the overall development of his kid. Speaking to him, I could sense how happy and proud he is of his son's achievements. He watches his son race and discusses it afterwards, sort of like a father and son debrief. 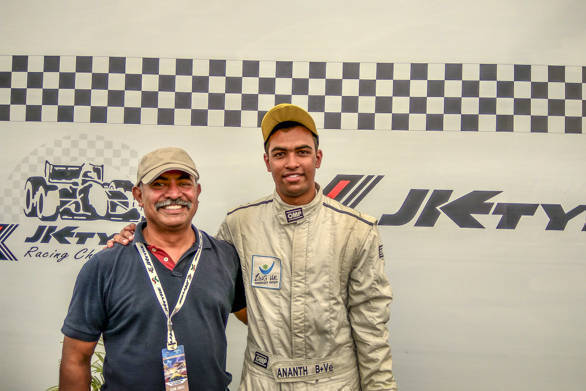 Ananth's father, Ponnambalam Shanmuganathan, is always present by his side, and they engage in a post-race debrief of their own

The more I spoke to him, the more I noticed how strong a bond he shares with Ananth. "I feel bad that I can't invest a lot of money to get my son to race in higher categories. But I'll try to do my best to help him. I see it as an investment. The kind of maturity Ananth shows is a result of motorsport. What else would a parent want?"

Sponsorship, as we all know, is a major challenge in this sport and Ananth is well aware of that. He has his sights set on the Super GT Series in Japan or the Porsche Asia Cup Challenge. He also fancies a chance of racing in the Audi R8 LMS series, following in the footsteps of Aditya Patel. "The ladder to that point is well defined and the chances are much higher." 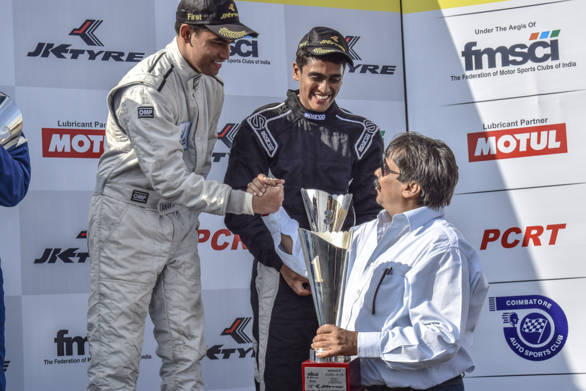 When I asked why he did not mention Formula cars at all, he is pretty clear that it's not an easy road to choose. "Give me a chance to race in any car and I'll be there. However, I know reality is a bit different. When you compete 9-10 weekends and test another 30-40 days, it is out of my means."

Quite frankly, it's amazing to watch a guy this young be so clear about what he wants. Maybe it has to do with the racers that he idolises. While, in his view, the charisma and sheer talent of Ayrton Senna is unmatched, Michael Schumacher exemplified the complete racing driver. "Schumacher was not only fast but he also managed to get the right set of people to work for him. That combination of speed and a powerful mind is pretty tough to beat," he adds.

Ananth is very positive about the way Indian motorsports is progressing but he has a very interesting view on what else is possible. He feels that Indian automobile manufacturers should view motorsport not only as a means of advertising, but also as an engineer's playground. Where they are allowed to experiment as well as hone their skills. And it will all pay off when they eventually win. 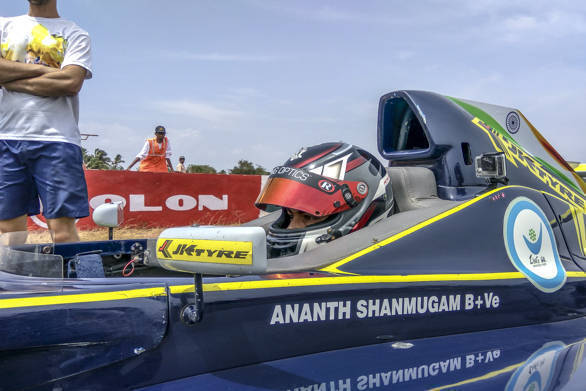 It's clear that Ananth does have the skill set to race, and as he says, if the right time and backing fall in place, competing in higher categories won't be a distant reality. He signs off by saying, "After all, I will repay my parents for all the efforts they've taken to get me to where I am."