The Air Quality Index(AQI), is a numerical depiction of the quality of air at any location. It takes into account the levels of certain pollutants in the air over a pre-determined time period to compute this. The values are then categorised according to a set scale to show their severity. The pollutants usually considered while coming up with the AQI value are PM10, PM2.5, nitrogen dioxide (NO2), sulphur dioxide (SO2), carbon monoxide (CO), groud-level ozone (O3), ammonia (NH3) and lead (Pb). These eight parameters are usually taken into account given that they best depict the state of air quality, have data that is easily manageable and have computing periods that make consistent calculation of AQI easy. Of these, the values of ozone and carbon monoxide are calculated every eight hours, while the others every 24 hours to give the daily AQI figure.

Calulating the AQI at a particular location is straightforward in spirit but involves a complex mathematical process. Weighted averages of each of the eight constituents are taken over a fixed period. According to the range of these values, the AQI for that location is determined

While sustained exposure to all the eight constituents are dangerous for human health, it has been found that particulate matter suspended in the air is most harmful. This is especially true in India, where very high concentrations of this have been recorded (five times that of US). PM10 denotes particulate matter less than 10 micrometres in diameter. These include fine particles of soil, dust, seasalt and organic material. These are heavy enough to not float around in the atmosphere for very long and usually get taken down by gravity or rain.

The real problem is with PM2.5. This is despite the fact that it is more often than not the second highest component of AQI after PM10. These are much finer particles less than 2.5 micrometre in diameter, consequently they stay in the air for longer and can be inhaled easily by humans and animals. They usually consist of compounds of all other pollutants like sulphates, nitrates, ammonia carbon and lead, which if inhaled consistently can cause serious long-term respiratory and cardiovascular illnesses. The numbers are dire in this regard, over 1.2 million people are estimated to have died in 2017 in India due to air-pollution related causes. The global numbers below are equally alarming. Given this threat, they're the major targets of the new BSVI emission norms headed our way in April 2020, alongside other pollutants like NOx, CO2 and SO2. 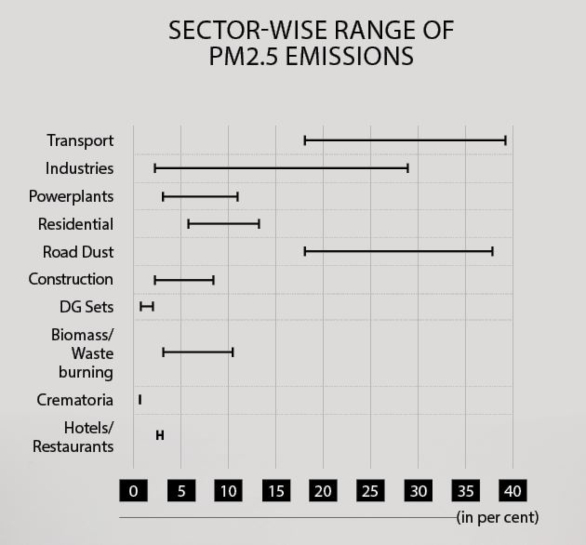 What does AQI have to do with cars or the BSVI norms?

The direct link between AQI and the BSVI norms is levels of PM2.5 pollution. The BSVI norms and the Euro VI standards that they're derived from, are focussed on reducing the amount of PM2.5 that cars emit, especially the diesel-powered ones. 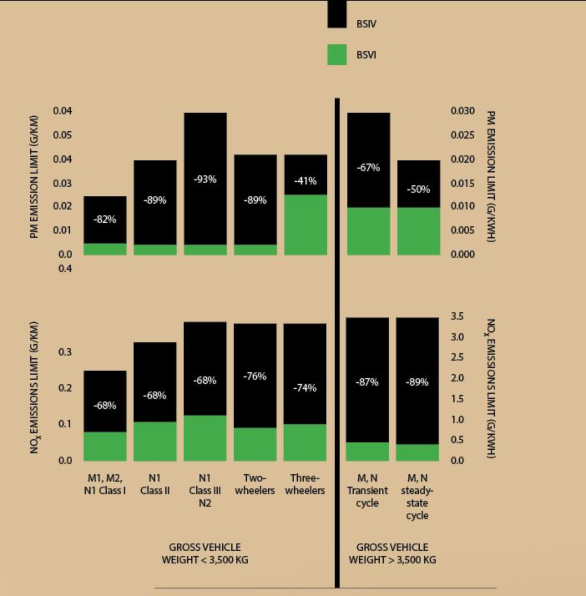 Diesel cars meeting BSVI norms will have to drop NOx emissions by up to 68 per cent and the PM emission levels have also been dropped by a staggering 93 per cent. Further, for the first time ever, a cap has been set on how many particles a vehicle can emit over the course of a kilometre, this has been set at 6 x 10^11 for diesel passenger vehicles. Another mandated change is that all BSVI compliant vehicles will need to carry a portable emissions measurement system so the ECU can constantly keep a tab on maintaining these limits.
That's not to say that the focus is entirely on cars. Even two-wheelers, which made up 80 per cent of all automotive sales in India in 2018-19 financial year, have to reduce PM limits by 89 per cent and NOx limits by 76 per cent.

Why are the norms for BSVI so strict?

Ever since India's started using AQI as a measure to check pollution, we've been able to better-keep track of the grave air pollution crisis in our country. The implementation of this measure has suddenly brought to light that India has 11 of the 12 cities in the world with the most amount of PM2.5 pollution, as per the WHO. The BSVI norms are meant to tackle this. Numerous studies by think tanks and government bodies have shown that vehicles and road dust are the biggest contributors to the air pollution crisis in terms of PM2.5. The other major culprits are coal-based power plants, industries, biomass burning and residential sources. Biomass burning include the crop burning practices in India, that have caused serious issues, while residential sources include houses in rural and semi-urban areas that still use biomass as cooking fuel.

This makes transport which includes everything from two-wheelers to trucks a good place to start regulating emissions. According to studies, vehicles are the largest contributor to PM2.5 pollution with up to a 40 per cent share. The other factors mentioned earlier consist of many small entities who will be required to do a much deeper, almost door-to-door intervention, which hasn't been possible just yet. Further, sources like road dust and emissions from power plants are interlinked with the rapid drive towards development. Norms have been put in place with increased commissioning of renewable power projects and building construction guidelines but enforcement is lax.

In the case of the automotive industry, these regulatory challenges seem less apparent. The car industry is made up of fewer stakeholders to begin with. It also consists almost entirely of large corporations with enough capital to work towards new, pollution controlling tech. It is also a tech-heavy field where constant innovation is the norm, making such developments more accessible. 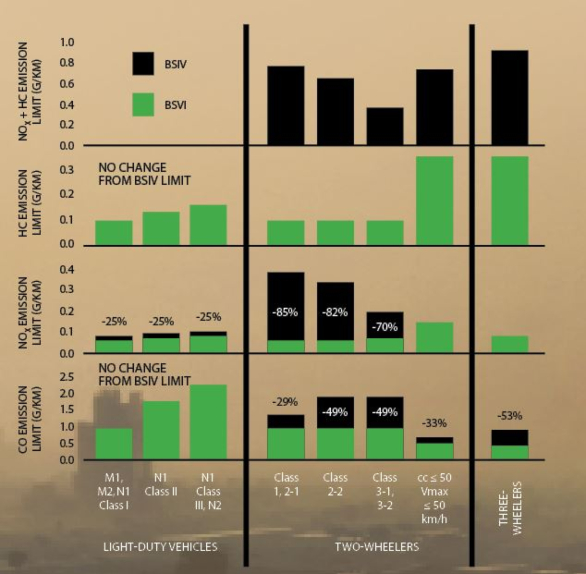 It can be said that conventional IC engine vehicles are somewhat demonised in how they are the constant focus against the fight against air pollution. Many governments worldwide are taxing such cars heavily already or putting in place initiatives that will lead to their eventual replacement with more sustainable options like EVs. But then, vehicles emit most of the eight constituent pollutants that make up the AQI. And in considerable amounts, given the sheer number of them on the roads and their long life cycles. Also, the number of them on the roads is only set to increase. Aside from the recent slump, the auto industry in India has grown at over six per cent since 2013.

What is the way forward?

At the end of the day, the BSVI norms are a limited response to the AQI problem. The EU is already coming up with new norms to supersede Euro-VI by 2025. These will again be a massive step towards reducing emissions but not control them entirely. As has historically been the case, India too will take up these norms in the future. Electric vehicles seem like the best bet now, even if they still produce only 35 per cent fewer emissions during their entire life cycle than a conventionally powerd car. But positive strides are being made in the acceptance of EVs in India. All concerned parties like carmakers, buyers and the government seem to think this is the way forward and are taking steps towards it. The spate of EV launches in 2020, the success of the Hyundai Kona EV and the implementation of the FAME II initiative are evidences of this slow but steady shift in thinking. 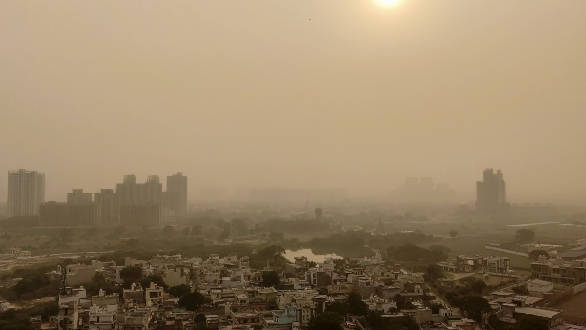 Severe Delhi Air Pollution as seen from a tall building day after Diwali.

But to immediately address the pollution problem, especially around Delhi and the NCR, the most effective step could be better implementation of the Graded Response Action Plan. This is a set of initiatives that the government takes to reduce pollution immediately after a high AQI level is detected. The reach of these initiatives depend on the AQI range. This is a sytem that has been implemented before, most recently in Beijing in the early 2010s, where the city suffered a similar pollution problem as Delhi. The GRAP uses measures such as prohibition on entry of trucks into urban areas; ban on construction activities, introduction of odd and even scheme for private vehicles, shutting down of schools, closure of brick kilns, hot mix plants and stone crushers; shutting down of a power plant, ban on diesel generator sets, garbage burning in landfills and plying of visibly polluting vehicles, among other things.

The GRAP has been implemented, but response time hasn't been quick enough. The timeline for implementation is ideally within hours of recording a high AQI. This is especially important for places in North India, whose geographical location also make them vulnerable to high AQI levels.
The idea with this part of this piece was to shed light on the problems faced in India regarding air pollution, how the automotive industry is involved in this and how the BSVI norms fit into the whole scheme. The next section focusses on how BSVI norms are changing cars and how the switch to it will affect you as a car owner.