At the helm of the Smoky Mountain Jetboat

So why do you see a boat sharing space with our regular dosage of wheeled mayhem? Well this particular boat actually has something in common with the Corvette that Bert drove round the Yas Marina Circuit in Abu Dhabi. Now what could a boat possibly have in common with the sexiest of muscle cars. I don't need to tell you that even though the Corvette has lost its beautiful coke bottle shape years ago, it's still better looking than this Smoky Mountain jetboat you see here. But if you could have only listened to me key the starter button on its minimalistic console, you'd be able to hear what I'm hinting at. A second later, a loud throaty burble turns into a deep thundering idle note that shatters the silence in Aamby Valley and hints at the monster under  the hood sorry hatch. Ah, that sounds like a V8. 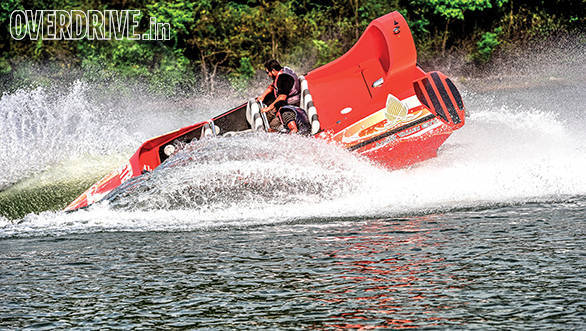 If you don't already know what a jetboat is, then let me give you a small introduction. Though it looks like any conventional speed boat, a jetboat is quite different in a few subtle ways that make a big difference on how it behaves out on the water. The first major difference is that jetboats don't have propellers to push them forward. Instead a jet of water is expelled at the rear using pure physics (action and equal and opposite reaction mumbo jumbo) to push the boat forward. And because the jet doesn't need to be mounted below the water line, which is a must for propellers, jetboats can operate in just three inches of water which gives these boats a very wide playground. With very little of the boat under the surface, there is also much less drag when moving through the water. Which also means that they are really, really fast. Steering is achieved by changing the direction of the jet and so it also inherits a very sportscar like over-steer flavour. In fact, they are the sportscars of the boating world and what's more, you don't need to travel out of the country to experience some true American muscle. 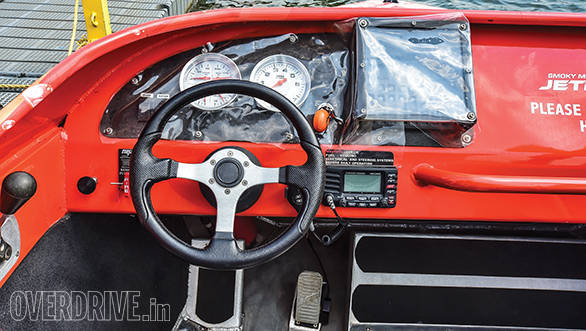 The simple dash houses a large tachometer on the right while the left is a composite gauge for fuel pressure, oil pressure and engine temperature 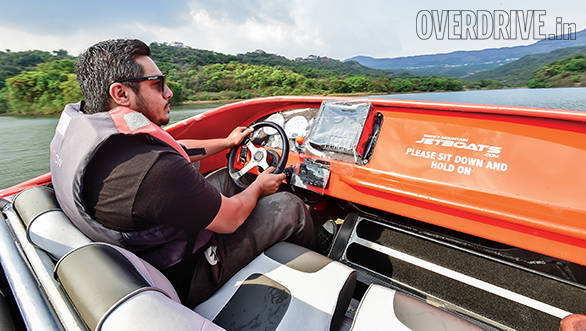 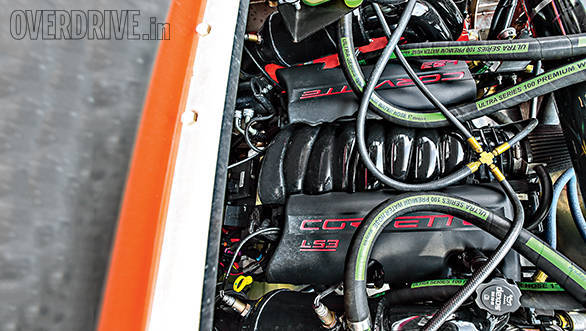 The 6.2-litre beast that sits under the hatch and belts out a thunderous sound track on full throttle

So that brings me back to that V8 and it's not just any V8. This tiny 1,200kg jetboat is powered by a Corvette LS3 V8 monster very similar to the one that does time in the 2015 Corvette Stingray. It's 426 horses and a monstrous 560Nm of torque pushes the 21 foot boat to a maximum speed of 72kmph. And while that sounds like a small number, with all the resistance from cutting through the water, that is very fast for a boat.

The driver position is completely offset to the left side of the boat where you're faced with a regular car steering wheel. On the left is a gear box control lever that changes the drive mode. Neutral is in the middle and you push forward to move forward and pull back to engage reverse. Another item setting this boat apart from the crowd is the floor-mounted throttle pedal and while it's quite alien on a boat, it's just like a car pedal. The throttle response is immediate and produces instant thrust. My first prod of the pedal nearly lifted the bow of the boat vertically out of the water. For an instant, you feel as if it's going to wheelie but then the stern follows suit, rising up, as the whole boat levels out and starts to skims over the surface of the lake. The steering is super responsive and capable of taking some really fast turns. In fact, you have to keep the throttle floored when taking turns to keep the boat stable. It pulls a heck of a lot of Gs as you feel the hull bouncing over tiny waves while the boat literally powerslides through the turn. And while it needs only three inches of depth to speed over, it's a little finicky about the surface. Owing to their light weight and super speeds, jetboats need flat waters to operate in and become really unstable in anything but the smallest of waves. So much so that the pilot has to even be careful running over his own fading bow waves, when he has to turn around and head back the way he came, which, on a small lake, is quite often. 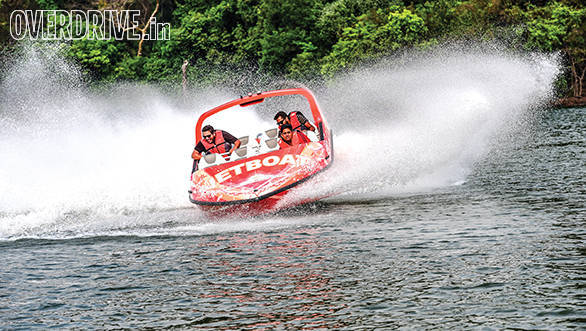 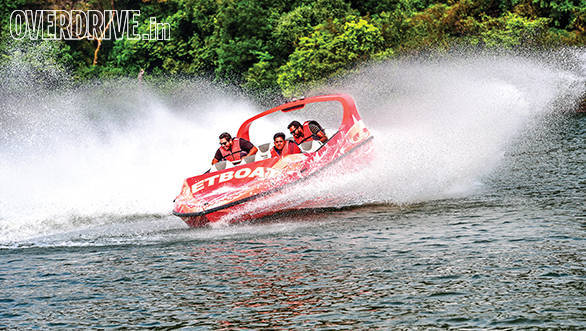 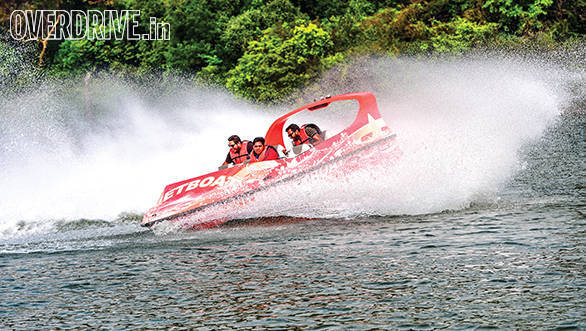 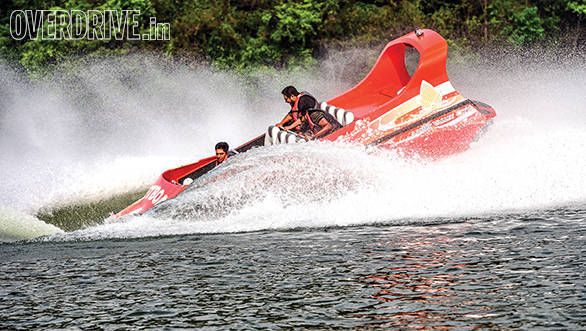 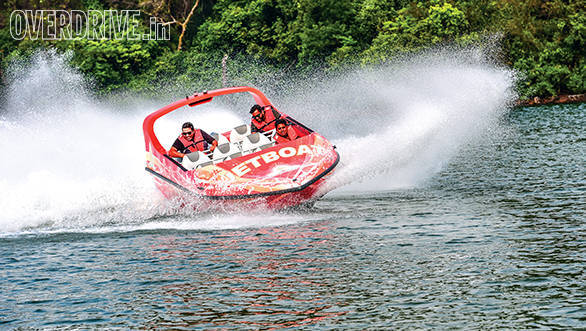 While I was able to sneak in a turn behind the wheel, this is also a serious performance machine, so all the stunts you see on these pages were performed by the very capable Mr Prabhakar, who is the trained and certified pilot for the jetboat in Aamby Valley's Wetlands water sports facility. No, his first name isn't Halley. The deft skill with which he throws the little boat around is simply amazing. The signature move for these crafts is the 180 or 360 degree spin where he throws the boat into a complete spin at full tilt, spinning the boat on a dime and drenching all of its occupants. He then hugs the bank of the Aamby Valley lake at full throttle, snaking the boat just a few feet from the shore where the water is just inches deep as we hang on for dear life. Another move is when he intentionally jumps over the bow wave, sending the boat into a small jump, followed by a thud as we crash back down into the water. 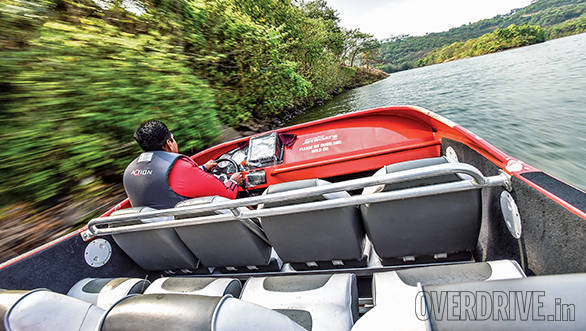 It's a great way to spend an afternoon and if you love the water, there's a lot more to do with jet Skis, kayaks and wake boarding available too. But it's the jetboat ride that is the real adrenaline fix. At Rs 1,000 per person it's a steal for a supercar like performance with a muscle car soundtrack. And while you may not be able to step behind the wheel, just experiencing the speed the jetboat is capable of and sitting through one of the 360 degree spins is a heady rush. 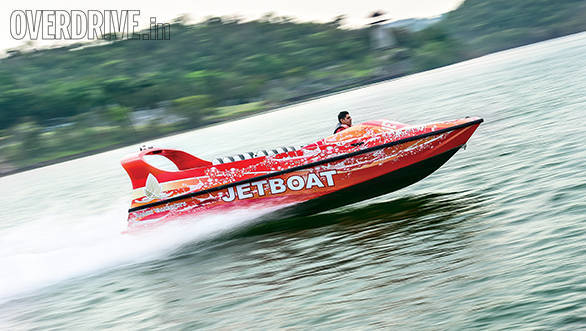