There's a small wager going on at the Inje Speedium ahead of the first Audi R8 LMS race at the track. People assembled in the Audi pavillion have been invited to guess the race winner for Round 5 of the championship. It would appear that Korean racing star Kyong-Ouk You is the most popular man on track, thanks to the number of stickers against his name. Meanwhile I'm trying to make my mind up as to whether I'll give the thumbs up to Earl Bamber or Marchy Lee. Do I pick the man who took second place in the A1GP championship in 2007 and has just about managed to win the Porsche Carrera Cup Asia? Or do I pick Lee, who is the reigning Audi R8 LMS Cup champion? And then I catch sight of Alex Yoong's name (yes, he of the F1 fame) who happens to be leading the championship thus far. This, I assure you, is a thoroughly confusing conundrum.

While my eyebrows are furrowed together in confusion, though, the fleet of Audi R8 LMS cars are making their way onto the pitlane for the race start. News filters through that Yoong is out of contention for the race, because of a crash during qualifying. Bamber has managed to clinch pole (dammit), with Adderly Fong in second place and Lee in third place. It has the makings of a terrific race. C'mon Marchy, let's get 'em! 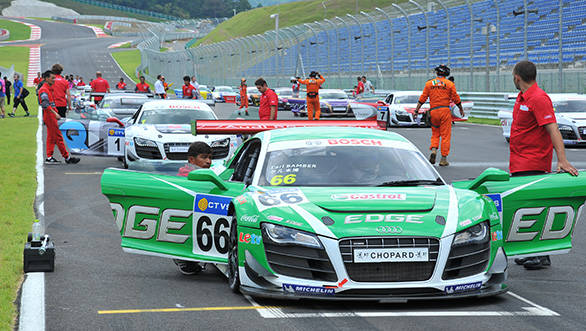 What is it that is so special about watching the Audi R8 LMS Ultras race at the Inje Speedium though? To begin with, the Audi R8 LMS Cup is the world's fastest single-make series. Skeptical? We were too, until we realised that the R8 LMS Ultras were lapping around 1min 35 secs at the Inje racetrack, close to five seconds faster than the other one-make cars on track  the 458s of the Ferrari Challenge and the Porsches in the Carrera Cup. Of course, the cars that feature in this series are detuned versions of the GT3 R8 LMS Ultra (with a milder aero package) which, to an extent, explains their turn of speed. Then there's the fact that it's also Audi's only single-make series in the world and is a part of their customer sport programme to promote their brand in various markets. For the first time, the championship has moved outside of China and expanded to other parts of Asia as well. Add to that the fact that the Inje Speedium is hosting a race weekend for the first time ever, and things get even more exciting  you see the track is challenging, with plenty of elevation changes and tight corners. All the better for racing, then. 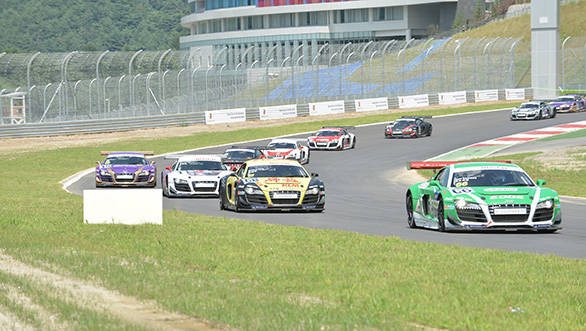 When the five red lights go out, it turns out, though, there's simply no stopping Bamber from running away at the head of the field. He manages to win the race with a comfortable lead ahead of Fong, while Lee finishes third. Meanwhile it is Adderly Fong who moves to the head of the championship standings. But the race isn't without its share of on-track argy bargy, with a multi-car pile up at the end of the very first lap, nothing that hampered the race leaders though.

Exciting racing aside, why does Audi run a series like the R8 LMS Cup? Well, Rene Koneberg, head of Audi Customer Sport, China tells us that it's not purely a marketing exercise. While the championship does showcase to Audi customers the sort of feats their cars are capable off, it also serves as a platform for Audi's R&D work not only in terms of performance, but also in terms of safety and sustainability. While the cars are built around the R8's aluminium space frame chassis, with a 16-point roll cage thrown in for good measure, they also run on a single set of Michelin tyres over an entire race weekend. The engines are expected to last for two full race seasons, while the transmission makes it through a whole season of racing. Then there's also the fact that the series also functions as a training ground, not only for pro and amateur drivers, but also the entire mechanical and service crew. Someday all this training could lead to participation in a European racing series. 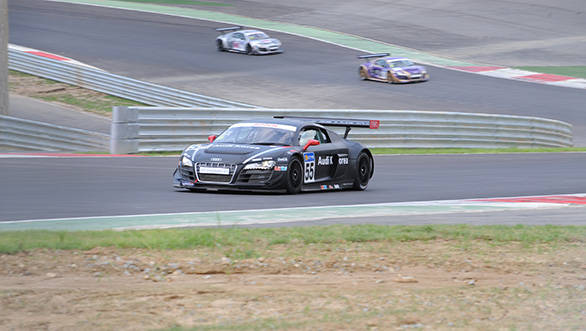 The cars run on a single set of Michelin tyres over an entire race weekend. The engines are expected to last for two full race seasons, while the transmission makes it through a whole season of racing

"He's too fast," says Adderly Fong of Bamber, who he is expecting will win the 20-lap Round 6 race as well. As it happens, though, Bamber's car develops a fuel-pressure problem in the race, putting an end to his campaign. Fong finishes second on track, ahead of Franky Cheng Congfu and solidifies his lead in the championship. And who wins? A certain Marchy Lee, who has had my vote of confidence all weekend. Never doubted that you could, Marchy. Not for a minute.