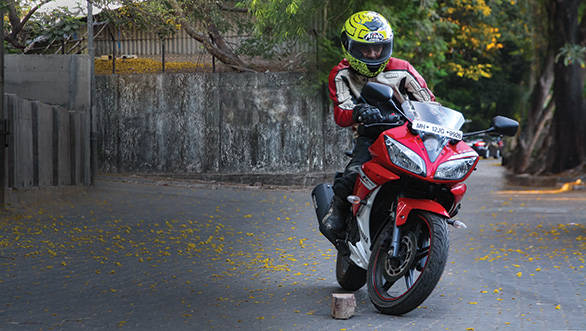 To recap, our eyes track danger by design and motorcycling requires you break that instinct and look where you would like the bike to go. But it is important to understand the instinct itself.

Have you ever noticed a stone in the distance and thought, "Well, I don't want to run over that." And then seconds later, run over it despite having literally lanes and lanes worth of space around to avoid it? Yes, it has happened to me too.

What happens is that you subconsciously or otherwise, fixate on the stone. Human beings cannot imagine the negative by design. Try imagining, for instance, not climbing a tree. You cannot actually imagine not running over the stone. And so you run over it. Your eyes fixate on the stone and the bike follows.

What you should have done, is actually simple but hard to do without practice. Try this, just change the thought from, "I don't want to run over that stone." to "I'm going to pass that stone about two inches to its left." This forces your eyes to switch to looking at the escape from the hazard - a nice, clean piece of tarmac next to the stone.

This is true for all situations. Many times, you think you have entered a corner too hot, and the speed may actually be inappropriate. But would Rossi on the same bike also get freaked out? The answer is obvious - chances are the bike can handle the extra speed.

The problem is that the panic has led you to looking at where you might crash instead of where you want to go. And the solution is to pull your eyes back in to the corner and look where you would like to be. Look to where the road goes.

I can guarantee that 99 per cent of the time, the result is usually just a thumping heart at the end of the corner. "Phew!"

The phenomenon of looking at and fixating on the hazard is called target fixation. And it tricks the best of us into mistakes.

The solution is to use it to your advantage and look (only) where you want to - rather than get overridden by it.