An automated car is one that takes the driver out of the entire action of driving. An autonomous car is capable of making its own decisions and acting on them without the driver having to intervene. The day isn't far when automobiles can drive themselves. Bosch says autonomous technology can reach level 4 by 2019. At level 4, human intervention in the entire driving process will be minimal, almost down to zero. The car will make all the necessary decisions required to reach its destination without the driver having to step into the process of driving. That is absolutely fascinating considering autonomous technology is currently at level 3, where cars need significantly more human intervention to make certain key decisions. At level 5, the car will think for itself! It all sounds a bit Verne-ian, but the reality is certainly something akin to 'Skynet' becoming self-aware. 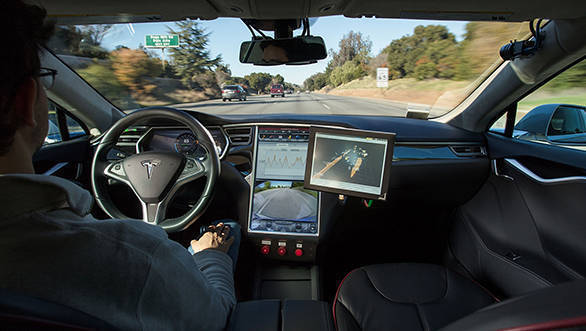 At Bosch's Mobility Experience event held at their facilities in Boxberg, Germany, I had the pleasure of meeting Skynet, er an autonomous car. It's both revolutionary and revolting at the same time. Revolutionary because of what it can do and will be able to do shortly. Revolting because it's soon going to make me redundant. And I so love driving cars!

Autonomous cars are the future; there is no denying the inevitable. Developers around the world are furiously working at creating an artificial intelligence for automotive applications that will be smart enough to know when to stop, overtake, turn and perform a host of other actions.

Simultaneously, other developers are working with governments to create the infrastructure necessary to smoothly make the transition from cars driven by humans to driverless cars. And more developers are furiously working at creating the car as a third living space, because if you aren't driving your car, you ought to be doing something else in that space, no? So, autonomous technology is forcing change on several fronts.

Bosch presently works with several manufacturers to develop autonomous technology and at the Boxberg event, we got the opportunity to see just what stage has autonomous technology reached in a Tesla. The sedan is equipped with six radars and lasers positioned all around the car. These provide proximity information to other objects within the driving environment. It also uses a stereo video camera which relays visual information about the layout of the road ahead as well as other information about the environment. These sensors form the eyes of the car, allowing it to see how the environment unfolds ahead of it and thus enabling its AI to make the decisions necessary to execute an action. On a closed loop, we had a two-stage driving cycle, the first cycle involved human intervention to carry out certain actions. A situation was created where the car had to turn right onto a road, which also had a motorcyclist coming up on the car just as it hit the intersection. The AI had to detect the oncoming biker and flash a warning message to the driver. It would not intervene because control of the vehicle still lay with the driver. 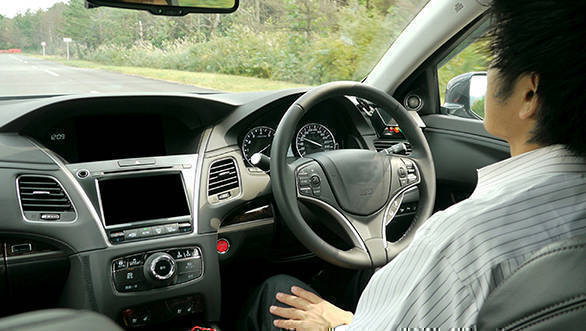 So far cars don't have the ability to intimate drivers of vehicles that will intersect their paths. They can only use certain technologies like blind spot assistance to warn drivers that another vehicle is coming up alongside it and which would not be visible to the driver in their rear-view mirror. Radar and lasers enable the car to now detect objects coming at it from various directions, allowing it to pre-empt a collision either by warning a driver allowing him to take corrective action or correcting the situation itself if it is in autonomous mode.

However, there was one more interesting technology that enabled the car to know a motorcyclist was approaching it from the side. Vehicle-to-vehicle communication! The motorcycle also possessed communicators on it that sent out continuous signals which were captured by the car. At any given second, there are at least 10 messages relayed back and forth between two vehicles, communicating a variety of information. In a more crowded environment, more than 1,000 vehicles can communicate amongst themselves. All these messages flying back and forth further enable the artificial intelligence to take decisions and act faster. 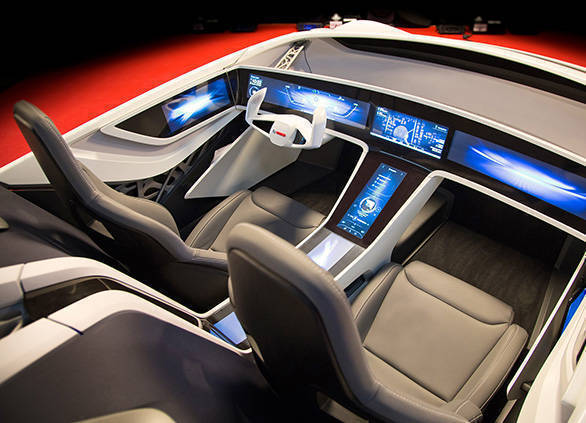 On the second cycle, the autonomous car had to drive itself around a handling circuit. This was conducted at a low speed but showed how the car can understand the flow of the road and make directional changes as required. It safely navigated its way through a 1.7km track keeping itself to the centre of the track equidistant from both edges. The future-generation cars will be able to understand on which side of the road they need to be on, as well as know their exact position on the road relative to other cars traveling in the same direction or against it. The lasers and radars continuously create hundreds of data points every second judging the contours of the environment it is driving in. Are there objects headed towards it, intersecting it, at what speeds, will it stop or not, the colour of the traffic lights, entering a circle, there are millions of situations that arise while driving. And these are just the simpler tasks, there are more complicated decisions. For instance, do you realise how when you go drive through an intersection you step off the accelerator, slow down and look both ways of the road before driving through, even though it's your signal!

Well, imagine artificial intelligence having to think the same way. Or have you ever realised how when you slow down and veer a bit further away from a child that is still being held by his mother, simple because you know the child could break lose any second and dart onto the road. You pre-empt the action, give the child a wide berth because your conscience says it's the right thing to do, but can artificial intelligence do the same? Artificial intelligence will also learn as it executes its actions creating safer and more predictive environments. But it's not an easy task. So with each day, AI will get smarter and smarter. Skynet is on its way to becoming self-aware!

At the Bosch Mobility Experience, we saw the advancement of both artificial intelligence and the autonomous car. It's a marvellous phase for technology but it also draws the question - where is the fun of it? And that's where connected cars step in. Still as a petrol head, I'm going to miss the clatter of internal combustion engines and their soul and character. Sometimes it makes you wonder just how good is change!