Dakar 2018: How Joan Pedrero Garcia was the last man standing for the Sherco TVS team

At the start of the 2018 Dakar, the Sherco TVS outfit was quietly confident. They had three riders, all with varying amounts of Dakar experience who were about to set off on their RTR 450s and tackle the dunes, mountain passes, fesh fesh and camel grass in Peru, Bolivia and Argentina. And the team itself was set to compete in its fourth Dakar, which meant that the collective experience that they had could potentially help them get to the finish line, hopefully with strong results. Like every other team in the Dakar, though, the team's manager David Casteau had cautiously stated ahead of the event that their only goal was to get to the finish line. Ideally, with all three motorcycles and riders intact. As happens so often in the Dakar, though, that dream crumbled. 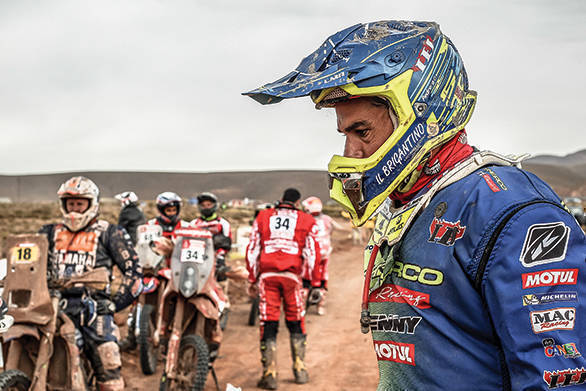 Frenchman Adrien Metge was the first to fall, injuring his left leg badly enough to have to leave the rally. Things proceeded smoothly until the fifth stage of the event, when KP Aravind, who had until that point been running very well indeed crashed out breaking his leg. The prognosis wasn't good, and Aravind has since undergone surgery to have the various bits of bone screwed back into place, is meant to start walking again in four months, and start riding a further two months after that. But, as he so optimistically told us, the goal is to take it easy in order to ensure he can soon start riding competitively, with as little adverse effect to his body as is possible. Which meant that the task of getting Sherco TVS to the finish line rested solely on the shoulders of Joan Pedrero Garcia.

Garcia, if you've met him in person, is an imposing sort of chap. He towers over the rest of the competitors at the Dakar. Is built rather more solidly than most of them, too. And, when he sits astride his Sherco TVS RTR 450, he actually manages to make the motorcycle look small. But perhaps it's this bulk that helps him muscle that motorcycle around, flying over dunes and rocky inclines as if they're merely tiny little whoop-dee-doos. Add to that the fact that he's finished the Dakar in the top 10 thrice before (finishing fifth twice), and you'll begin to understand why Pedrero is taken so seriously in the world of rally-raid racing. Which is why it's no surprise that when the front-runners in the Moto Class of the 2018 Dakar were being discussed, other than the KTMs, Hondas, Yamahas and Husqvarnas, it was Pedrero's name that emerged as a dark horse for the win. 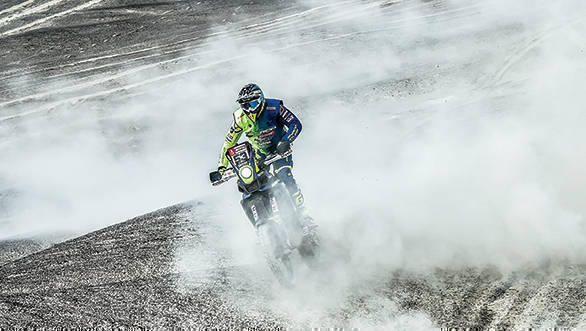 But the Dakar is the Dakar. Plan it as best as you can, try as hard as you may, you can never accurately predict a result. A stone here, a river crossing there, or even a tiny little miscalculation in navigation, might lead to dire consequences. But perhaps as others went for stage glory, Pedrero's consistency over the course of the event came into play. The Spaniard was consistently fast and consistently good. After the rest day at La Paz though, it took him a couple of stages to get back into the top 15. En route Uyuni, Pedrero was ranked 21st in the stage, bringing him up to 16th overall. On the stage to Tupiza, he finished 30th, bringing him down to 20th overall. With Stage 9 cancelled, Pedrero set about attacking the 10th stage of the event, ending 10th in stage and moving up to 17th overall in the rankings. With the eleventh stage of the event being the second marathon stage for bikes, he did well to break into the top 10, finishing 8th in the stage, and being ranked 14th overall. Perhaps, if the 12th stage of the event hadn't been cancelled, though, Pedrero would have managed to climb further up the order, but with safety being cited as one of the reasons for the cancellation, riders then needed to attack Stage 13. A quick aside - let's not forget that there were no deaths at this edition of the Dakar - so full credit to the organisers of the event for making the hard decisions.

After the cancelled Stage 12, ?though, it was almost as if Pedrero decided that since he was so close to the finish line, he might as well go hell for leather. The stage from San Juan to Cordoba saw the Sherco TVS rider finish in fifth position, which pushed him to 11th overall in the rankings. After this, the final stage in Cordoba was easy enough - 10th in stage and 11th overall, which wasn't too bad after all. The finishing position is Pedrero's best for the Sherco TVS outfit, two positions higher than his last attempt at the Dakar in 2017. He's made his status as the team's number one rider fairly clear now. On to Dakar 2019 then!