Dear Niki: A letter to one of F1's greatest drivers of all time

A few years ago, I wrote a letter to a racer who I'd never met. In fact, it was someone that I had absolutely no hope of ever meeting, because he was gone long before my time. It was a piece of writing that wasn't meant to be an epistle, but simply turned out that way. In a strange way it was cathartic. Which is why I suppose that when I found myself struggling with this piece of writing, I shouldn't have been surprised to see it morph slowly from magazine page memorial, to missive. But from the moment I felt it taking on this form, I decided to put things down exactly the way they came to my mind. Hence the seemingly familiar salutation, from someone who never knew you personally - but "Dear Mr. Lauda" just seemed cold. Please know, though, that this letter is written to you with respect, admiration, and rather a lot of awe. Because that's the sort of person that you were - awe-inspiring both to the people who knew you, and the people who only knew of you from afar. After all, measures of distance and time are completely meaningless in the face of heroic stories. And in the context of the people of whom those stories are born. 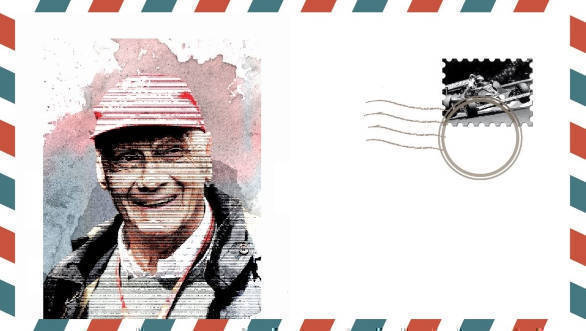 As I type this out, it's almost a month since it happened. A month since I woke up to a message from a friend that brought with it the news of your passing. I shan't pretend that I wasn't completely and utterly distraught. And I shan't pretend to be able to understand just how devastating a loss this must be to your loved ones. But I can only write about this from my experience, because that's the only version of reality that I've lived through. So it was that when I first read that message, my immediate impulse was to shut my eyes tight and try to force myself back to sleep. As if that would change the outcome of the day that I was waking up to. It didn't. There was no choice but to accept the day exactly the way it was. There are things we can control, and things we can't control in life. What counts, however, is the way that we behave in the face of troubled times - when things around us spin out of control. That seems to be the most significant. And that is a lesson that I learnt from you. And from your story. And the many brave choices that you made. But to tell this story, I must start at the beginning. 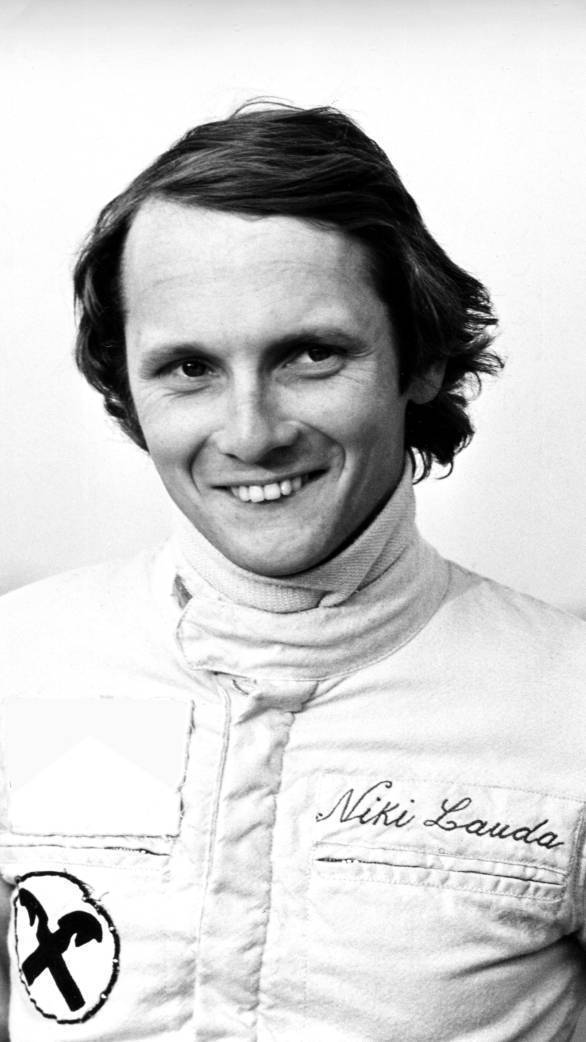 See, growing up in India and watching Formula 1 broadcasts in the late 90s and early 2000s, I found, early on, my scarlet-clad motorsport hero. But with every race that went by, it seemed to me that the commentary reminded me of exactly how much I didn't know about the sport that I was falling in love with. There were names that I'd never heard of before, races that I'd never watched, and stories that I really wished I knew, but didn't. In the days of really dodgy dial up internet on the family computer, my attempts at researching my many motorsport queries were repeatedly thwarted. Imagine how the world opened up when I found a copy of Formula One: Unseen Archives by Tim Hill, at a book sale in Bangalore. The story of every season of Formula 1 told chronologically, illustrated with photographs from The Daily Mail's archives. It was but a small glimpse into the sport. But suddenly I encountered the likes of Farina, Fangio, Ascari, Moss, Clark, Hawthorne, Hill, and so many others. And then I got to the 1970s

Which is where your story, or at least a part of it, began. Three chapter titles are seared into my brain. "1975: Lauda takes title from Fittipaldi". "1976: Hunt 'the Shunt' by one point". "1977: Lauda repays Ferrari loyalty". It's funny how 23-odd pages in a book, containing the story of a human being you've never met, can change what you know of this world. And can change how you see life itself. 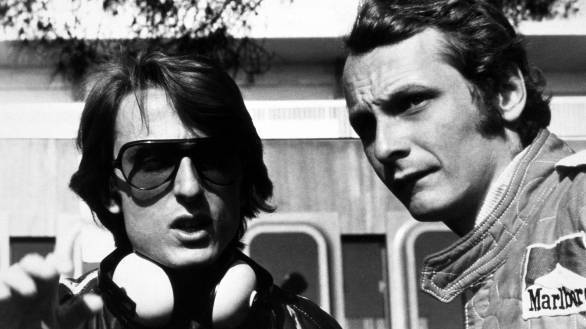 Luca di Montezemolo, then manager of Scuderia Ferrari, and Lauda in conversation. Their partnership led to titles in '75 and '77.

I'd always assumed until then, that true courage meant fighting every battle that came your way. Digging your heels in, getting your head down, balling up your fists, and going for it - no matter what. But your story taught me about the power of choice. And the strength required to make that significant choice. The choice that one knows is right for oneself. In retrospect, I suppose it taught me a little about the occasional value of stubbornness too. 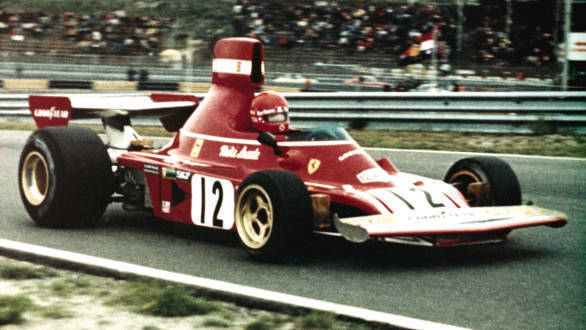 What you did in 1976, when you got back into the cockpit of that Ferrari 312T, racing just six weeks after an accident that nearly killed you, was a stellar display of courage, and an exemplary display of human resilience. But in a sport where winning seems to matter more than anything else, the fact that you chose to step out of that car at the Japanese Grand Prix later that year, effectively handing over the title to James Hunt, was a far greater display of courage. You made a choice - life over a championship title. And to me that was remarkable. I suppose that I've subconsciously chosen this exact word, because it's been stuck in my head. It's the very same word that the incomparable motorsport writers, David Tremayne and Mark Hughes, used to describe you in the second motorsport tome that I ever owned: The Concise Encyclopedia of Formula 1. The book, as it sits open on my table now, is more than just slightly well-thumbed, and looks its age. "So much of what Niki Lauda achieved is remarkable, and he stands out as being a little bit different, even among a collection of World Champions," they'd written about you. Truer words than these have never been writ. 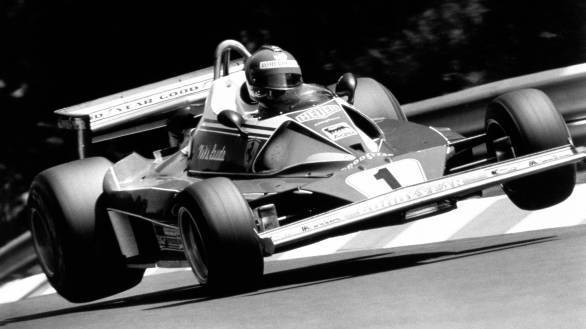 It was a happy coincidence then, that years later at the 2012 Indian Grand Prix, it was Tremayne who encouraged me to go and speak to you and get that interview that I really and truly wanted. I was surprised at how readily you agreed to talk to me. And, when I look back at it now that a few years have gone by, it seems less like an interview and more like a conversation. I can't recall it in its entirety, but some parts of it are so very vivid. "You had to think before, 'Do I want to take the risk to kill myself or no?' Principal decision," you'd said about racing in the Seventies. It was the sort of decision that you could only make for yourself. And it was a time in motorsport when this principal decision could potentially lead to horrible consequences. I also remember you saying that you didn't believe you'd lost the championship because of that last race in Japan. Instead, you'd said, "I lost it because I nearly killed myself in the middle of the year. I missed three races. I can bring this also as a reason why I lost the championship." And after saying this, you'd smiled, reaffirming my belief that you regretted absolutely nothing. Which seemed to me then, as it does now, a very fine way to live life.

See, in my formative years, there was a work of fiction that became very popular. It was about a young wizard, who was known as the "boy who lived". But he existed only within this beautiful world of make believe. You, however, were real life. Living, breathing, blood, flesh, bone. You were the ''racer who lived''. Despite the cruel circumstances of that horrible crash at the Nordschleife. You somehow managed to wind the clock before it could stop ticking. You made sure that the trail of sand going from one glass chamber to the other slowed to a trickle, but didn't run out. And then you flipped the hourglass on its head and carried right on. 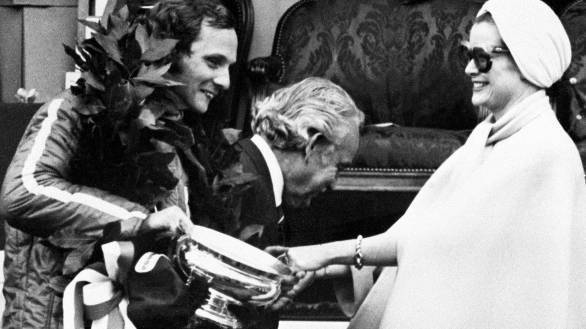 Niki Lauda receives the winner's trophy for the 1975 Monaco GP from Grace Kelly.

I grew up in a post-Tamburello era, when efforts were constantly being made to make racing safer. An era in which racing fans like me were fortunate that we didn't have to encounter days when the Grim Reaper showed up at the racetrack. Until a horrible day in 2013 when I was trackside at Le Mans. I was travelling with the Gulf Aston Martin Racing team that year. During the first three laps of the race, their driver Allan Simonsen died. To be at the racetrack, closely following the fortunes of one particular driver trio, and to watch one of them not make it out of the race alive I don't think I can begin to describe how horrible it was. I don't even want to try. And I also know that it cannot compare to what you yourself saw in your years in motorsport. But that day I saw the clock stop ticking. I saw the sand in the hourglass run out. There was no turning back time. 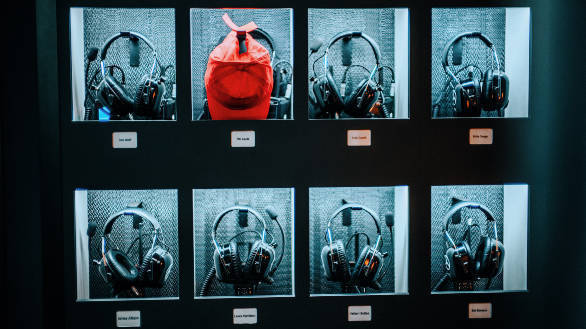 Racetracks are often places where unlikely friendships are formed. And when I think back to that dark weekend at Le Mans, I know this is true. What I don't know is if the kinship that was forged between a few of us, was because of a shared interest in motorsport. Or due to a shared grief. Maybe it was a combination of both. Well, the day the news of your passing broke, one of those friends - Jonathan Wesley - wrote to me. This is what he said: "It's affected me more than I thought it would, considering I didn't know and had never met him. Testament to the man he was I guess. I always thought Niki Lauda transcended his sport, like Muhammad Ali did and Pele still does, and this reaction confirms it." He was referring to the outpouring of sorrow from all parts of the world. Stories about you flooded the internet. Many beautifully worded pieces of remembrance, and many poignant obituaries were written. And I suppose this piece of writing - this letter to you - is precisely because I cannot bring myself to write anything else. Least of all an obituary. 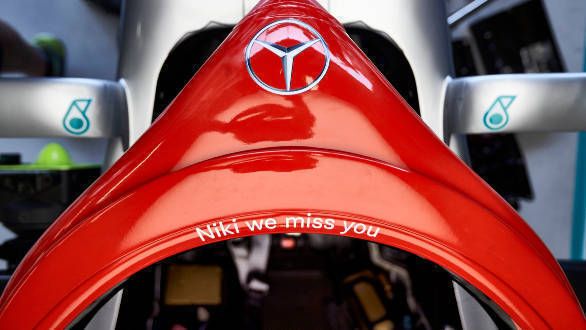 What I can do is tell you that I learnt so much from you. The value of never being afraid to speak one's mind. The benefits of always telling the truth. The importance of choosing one's battles. The necessity of stubbornly believing in oneself. The significance of doggedly pursuing one's own path, no matter what the world might think of it. And the undeniable gift that is the present moment. But from you, from your story, and from your incredible spirit, I also learnt what real courage is. And if ever I chance upon my own metaphoric Bergwerk, I can only hope to be half as courageous and resilient as you were.

There's another thing that's been on my mind. Which is that I wonder if you'd approve of a piece of writing like this. Perhaps you'd think that it was all too much, especially coming from someone who only met you twice. But the most overwhelming life lesson that I've learnt from you is that there is a fundamental value that lies in doing things your own exact way.

Which is why this, then, is my way of saying thank you. For absolutely everything. Nothing more. Nothing less.