Within hours of Skoda opening the online bookings for the limited run of 200 units of the Octavia RS 245, the website was down. Orders had flooded in and people were putting down money even before they knew what the price tag read! Of course, there's the vRS badge legacy to thank for that. A legacy of offering so much more than just what the usually-impressive numbers on the box say. From the Mk1 Octavia RS, to the Laura RS, and the more recent cars with the 2-litre TSI motor, making big power was often just a few hours and an ECU remap away. And given the aftermarket support for these VAG cars, bolt-on upgrades from intakes, exhausts, suspension components and even larger turbochargers are all relatively easy, reliable and affordable ways to go quicker. 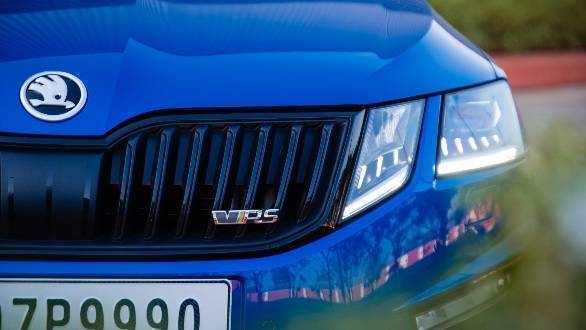 Which begs the question, is the fully-imported Octavia RS 245, at Rs 36.9 lakh ex-showroom, worth the price difference over the RS 230, which retailed at around Rs 25 lakh when launched? On the face of it, you're getting 15PS/20Nm more, an extra gear in the 7-speed DSG 'box, an electronically-controlled limited slip differential, and larger brakes. While the discussion may be a moot point, a handful of RS 245s have become available currently. 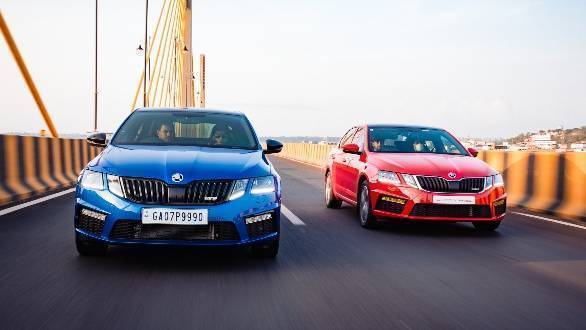 Back to the burning question though, who better to answer it than Keith Desouza? A highly technical racecar driver with a championship title to his name, he pretty much builds said racecars at home. 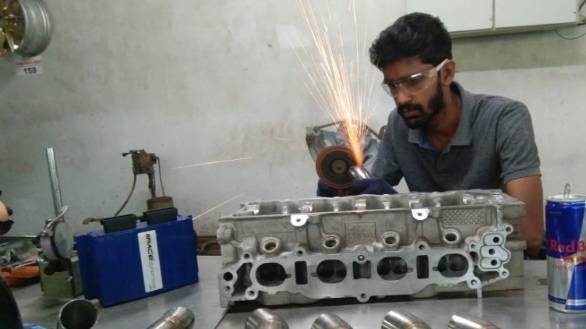 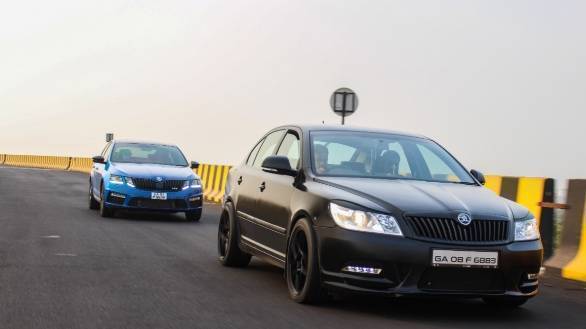 Keith runs Unimek Racing in Goa, who've engineered the country's first AWD Laura 1.8, and race the only privately entered VW Vento in the Indian Touring Car championship. Fair credentials? We think so, especially considering he's pals with the lucky owner of the first RS 245 in the country, a Race Blue example delivered in the green zone of Goa long before anywhere else. 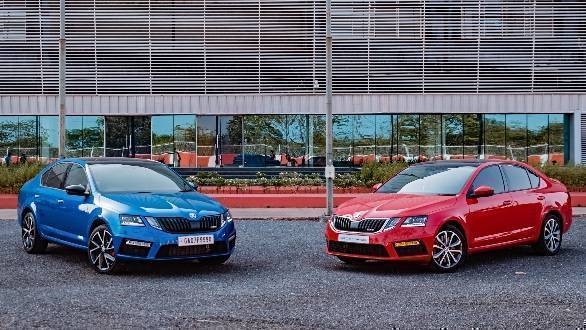 First off, the 245's distinguishing features versus the 230. From what we've seen of the car at the Auto Expo and in pictures, we know the RS 245 has its grille, mirror caps and boot spoiler finished in gloss black. We also know it rides on much sharper looking, and larger, 18-inch wheels with machined spokes, wearing sticky Bridgestone Potenzas S001s, sized 225/40 R18. Despite being lower in profile than the 225/45 R17 Hankooks that came as standard on the RS 230, the overall change in diameter of the wheel package makes the 245 sit a little higher. On closer inspection, Keith found that the colour code on the springs doesn't match what's offered on the Euro-spec car, so it's apparent that Skoda has tweaked the setup slightly for our conditions. 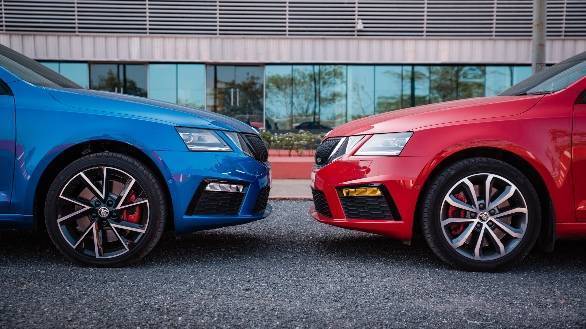 The interiors on the 245 are pretty much the same as before, with the carbonfibre-like trim and Alcantara upholstery feeling as special as they've always been, with the bonus of a ninth airbag, one up over the 230. The lovely and detailed virtual cockpit is a great addition too, complementing the information from the 8-inch central touchscreen. Hitting the vRS mode button on the centre stack also brings you to the drive mode selector screen, where you can further tailor individual settings for the steering, front differential, and even the engine sound! 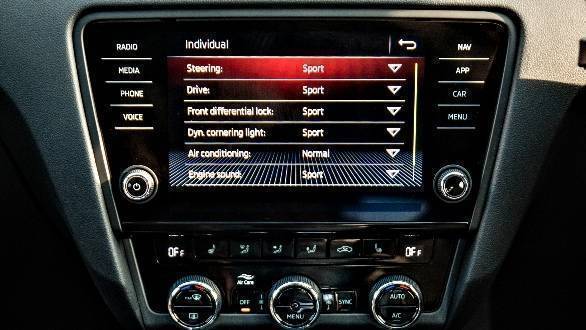 Keith says the mechanical differences start to make themselves known from the very first time you hit the starter button, "The car now comes with a GPF (Gasoline Particulate Filter) to meet BSVI emission standards and has now lost the significant, yet muffled, exhaust note that the 230 had. This would be a minor turnoff for the enthusiast. Skoda however has a solution - fake engine sound! Turn it on and you now have the feeling of a DAZA 5-cylinder sitting under that hood while driving hard, and an almost-large displacement N/A note while cruising. It's important to note that this system is not just RPM dependent but gear and load dependent too, which although not very realistic is still very immersive!" Like on the RS 230, he says fiddling with the steering modes doesn't alter the feedback, but rather just adds weight to the steering. 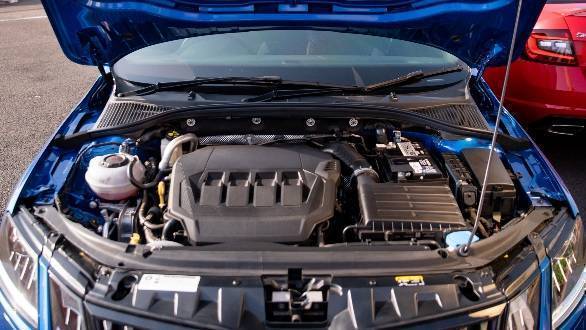 No 'TSI' branding on the RS 245's engine cover, but it's still very much one

Moving on to the drivetrain, another area in which there's seemingly only minor changes. But Keith's research reveals otherwise, "The engine is the same 2-litre TSI EA888 Gen 3 as the 230, but not all of these EA888 engines are the same. The internals vary and so does component design. It has different camshafts, stronger internals, and a variation of the IS20 turbo, all contributing to its 245PS/370Nm figures. So while the 15PS/20Nm gain isn't immediately noticeable when you drive it, it's an overall stronger and more reliable engine to push more power from. Also, there isn't any auxiliary port injection, which would help the guys chasing high horsepower numbers and also helps keeping the valves clean from carbon buildup." In fact, this exact same engine makes nearly 300PS right from the factory in the most powerful Golf you can buy, the GTI TCR. Like that car, the RS 245 is only available a 7-speed DSG transmission with a wet clutch (the fairly recent DQ381) instead of the 6-speed DSG that the 230 came with. It's a smoother, stronger gearbox, with a higher torque rating and the extra ratio means shorter ratios overall, and quicker acceleration. 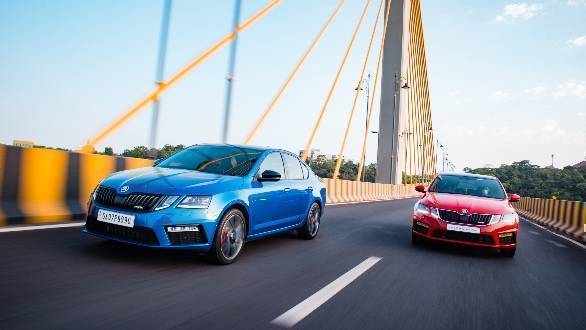 The 245 does pull about a car's length gap to the 230 by the time both reach 100kmph from standstill. Skoda claims a 0-100kmph timing of 6.6 seconds, about 0.2 seconds quicker than the 230 so this gap sounds about right. There's no doubt the LSD is helping split power evenly off the line, but we'll get to the differential in a bit, the addition Keith is most excited about. 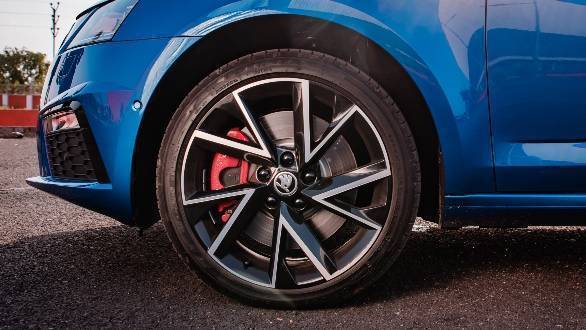 What then of the ride, surely the larger wheels and low profile tyres would change the otherwise fairly compliant setup of the RS 230? Keith, who's quite used to bone-jarring rides, knows better than most that all out stiffness doesn't necessarily mean faster in the real world. He says that though the 245 rides a tiny bit higher, the ride quality is well sprung, yet comfortable over undulations. We think a nice addition would've been the adaptive Dynamic Chassis Control (DCC) on offer on the Euro car, an £850 (roughly Rs 80,000) option in the UK presumably dropped in the interest of costs. 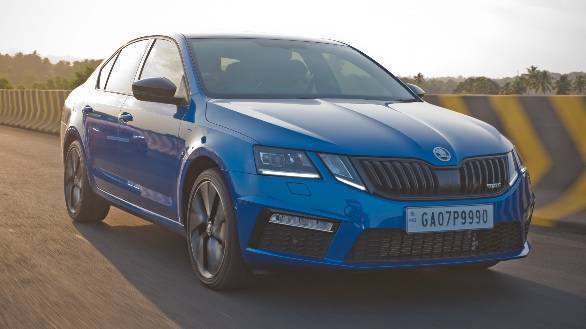 "When it comes to cornering, there is no doubt that any FWD car would tend to understeer, but the 245 has a trick up its sleeve", and then just like a racecar driver is wont to, Keith breaks it down, using the phases of a corner, "The whole idea at the turn-in point is to get the weight balance to the front by trailing the brakes, allowing the rear to lighten up, loose grip, rotate just to the point of oversteer, and then get back on the power to straighten out the car on the exit. That's ideal. But in the case of the 230, like most road cars with open differentials, you can't really get on the power and stop the rotation efficiently because you'll just get inner wheelspin and understeer. And though the 230 has the XDS+ electronic locking differential, it works via brake vectoring, or braking the inner spinning wheel, so it has its limitations. The 245, however, has an electronic limited slip differential, or VAQ in VW's terms. Now this is a proper piece of kit! It works like a plated diff found in proper race cars, but is electronically controlled. So, when it senses a wheel speed difference between the electro-hydraulics, it clamps the left and right together sending power to both wheels with maximum traction. Of course, with the right technique, you can really maximise this extra traction the RS 245 gives you." 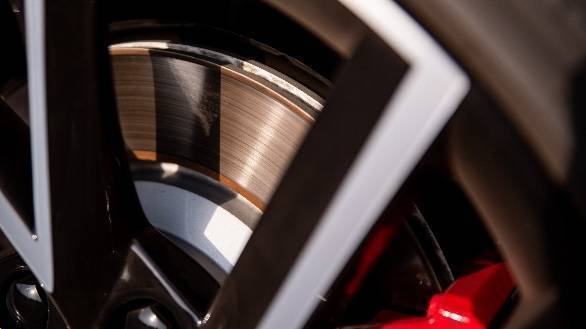 Larger 310mm rotors at the rear are vented too

In case you were wondering, the 245 gets larger 340mm rotors up front, ventilated as on the 230, but the rear 310mm rotors are now vented. Keith continues, "The electronics let you left foot brake and it feels like there's less ABS intervention during aggressive braking. The bigger rotors at the front contribute the most, there's so much bite when you first hit the pedal, these almost, almost feel like the VW Cup car brakes! Bigger, ventilated rotors at the rear, which won't make a huge difference during a trackday, will help reducing stopping distances with a fully-loaded, heavy car on long journeys." 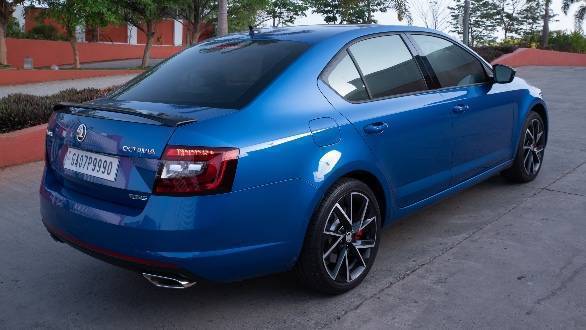 It seems like Keith's quite smitten with the RS 245, and when asked what he would change on the car, his list isn't very long, "The ideal upgrades would be a cat-back exhaust system keeping in mind emission and noise regulations, and upgraded software as seen in the higher powered VW Golf and SEAT Leon Cupra for factory reliability. Euro-spec ride height springs and dampers would have OEM-like feel, a better stance and slightly improved dynamics. In parts alone, it's a worthy upgrade over the RS 230." If that's all it would take for a professional racer to make his perfect car out of an Octavia RS 245, that really does say something to how far the vRS badge has now come. We can't wait to get our hands on one.