Honda celebrated the first anniversary of the third-generation Jazz in India last month. Being the second best-selling model after the City, the Honda Jazz accounted for 26 per cent of HCIL's sales in the past one year. Adding to that, the Japanese automobile major has achieved the cumulative sales of 50,000 units since its launch in India. Since its global debut in 2003, the company has sold an impressive 6 million units. 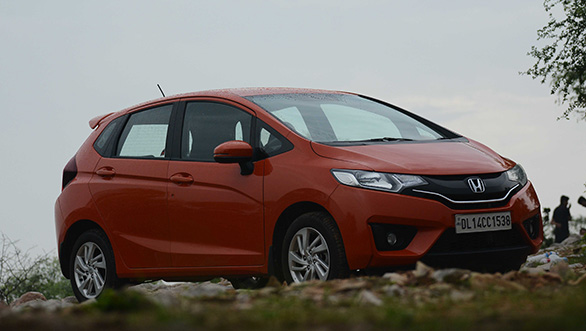 Honda is extremely happy with the Jazz's steady performance in India. And to celebrate the new Jazz's first anniversary, Honda invited automobile journalists to Jaipur. The itinerary was not clear in the invitation as the team wanted to surprise us with a host of tasks lined up in the two days of the event.

On our arrival in Jaipur, we realised the sun was scorching at its best. We were then driven to the Marriott Hotel which is mere 11 minutes from the airport and was also the starting point of the drive. After completing the formalities and a quick lunch, the Honda convoy began proceeding its journey. The first task for the day was to reach Samode Palace. Doing the duty was a petrol Honda Jazz V trim, which sits below the top-end trim. On paper, the Jazz petrol makes 90PS/110Nm which is reasonable for a car of this size, but when the combined weight of the four occupants together is close to 400kg, not to forget with fully loaded boot, it is a completely different experience. 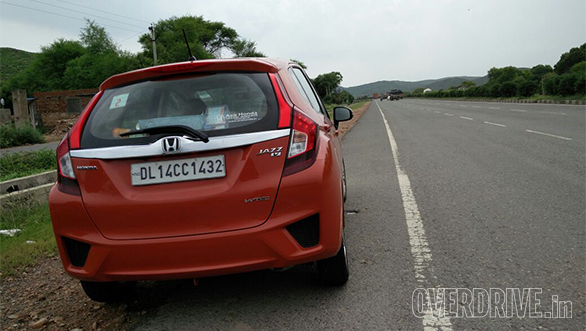 After tackling city traffic, which was decent on that day, we found ourselves cruising on the NH52. The Jazz diesel was a part of our long-term fleet. Its 1.5-litre motor is not the best for city commute, but it is impressive on highways. So it was my first time with the Jazz petrol on a long journey. The 1.2-litre i-VTEC is smooth and very rev friendly. Unfortunately, with so much of mass being hauled, the motor couldn't do much and needed to be kept at peak. The lag was getting evident when the Jazz diesel zipped past us, thanks to its 200Nm of torque at a considerably lower 1,750rpm.

Even though the Jazz petrol is primarily a city car, on highways it was quite comfortable. Ignoring the engine lag, the short and precise gear shifts proved to be very handy. With the cabin loaded in the best possible way, the suspensions still managed to soak up the uneven undulations offered by the surface. In the handling department too, the steering feel is better than its heavier diesel counterpart. The same was felt when we took it to the Kari Motor Speedway for our comprehensive affordable hot hatchback track test.

After covering a considerable distance, finishing a bunch of energy bars and kachoris as well as missing some turns here and there, we finally managed to close in on Samode Palace. Just as we were taking the final right turn to our hotel, the Honda team sent us a message with directions leading towards a task area. We drove on extremely rough patches of roads, and in some places there were just sand paths. But our Jazz continued to march on, taking us to the task area which was layered with sand. To add to the confusion, there were two cycles, plant pots and boxes of different shapes. The challenge was to fit the boot with as much as possible in the least time by adjusting the rear seats. The idea behind this challenge was to show the benefits of the Jazz's magic seats. 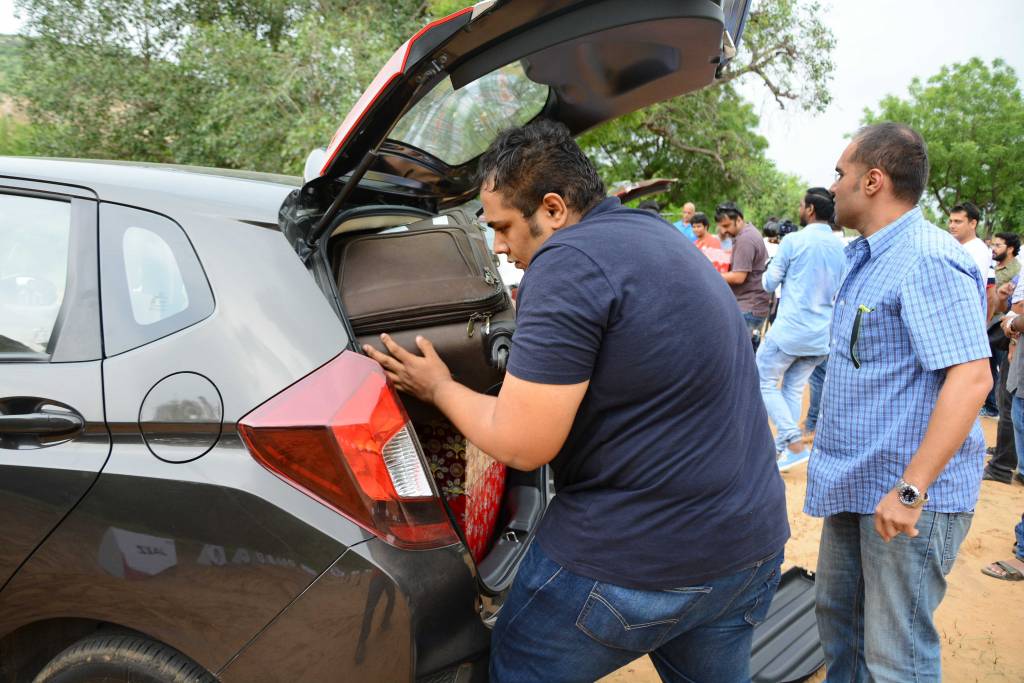 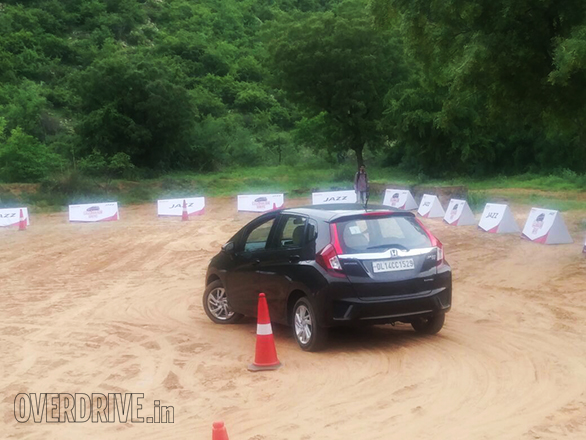 The second task was a slalom test, where the cones were arranged in such a way that driving around them without touching was a challenge indeed. The light steering wheel paired with the quick shifting gearbox was helpful here. After finishing both the tasks, we headed towards our stopover for the night - Samode Palace. 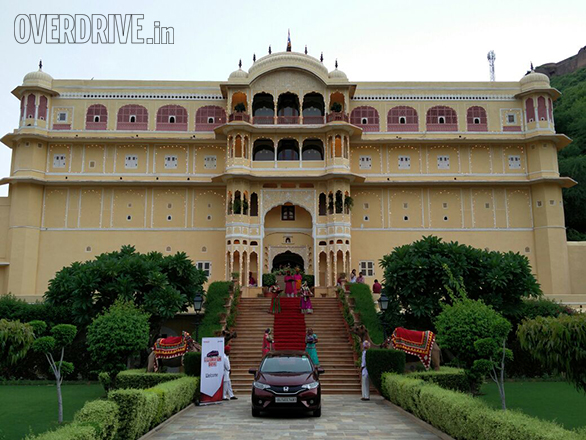 Generally in such media events, the journalists are given a route presentation. However, team Honda didn't give us any. Instead, they told us to head to our final destination, Marriott. However, there was a catch. We were supposed to cross four checkpoints before heading to Marriott. And the locations of these checkpoints were hidden in clues. We also had to keep account of the time because if we ran too late, we would not only lose the challenge but also miss our flight to Mumbai. 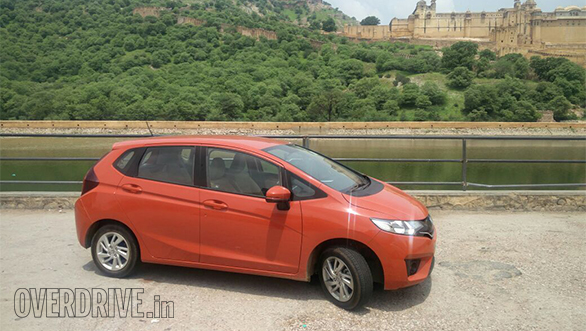 The first clue took us to Maota Lake, where we were supposed to take a selfie and ride an elephant. Catching some fast pace, we drove through the hustling town and reached the lake point. Here we got in a bit too enthusiastic and started reading between the lines of our clue. We ended up taking a detour of 30 km before finally reaching to the designated point and then took the next clue.

We had divided our responsibilities. While I was the one behind the wheel, Clint Quikr Cars was responsible for navigation. Venkat and Sagar used their networking skills and started calling their friends and acquaintances, more like phone-a-friend in KBC, to understand the hints. The second clue took us to Hawa Mahal. If you have been here, you would know that driving in these narrow lanes with dense traffic is not easy. But our Jazz continued the momentum. Here too, we had to take a selfie before heading to our next checkpoint. 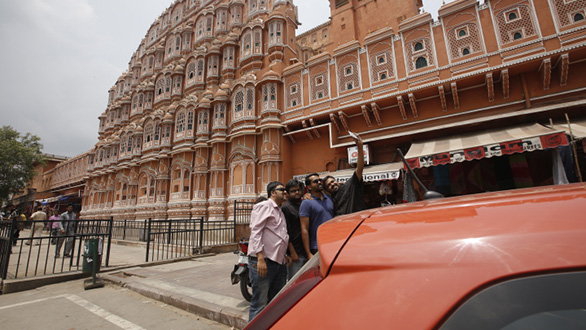 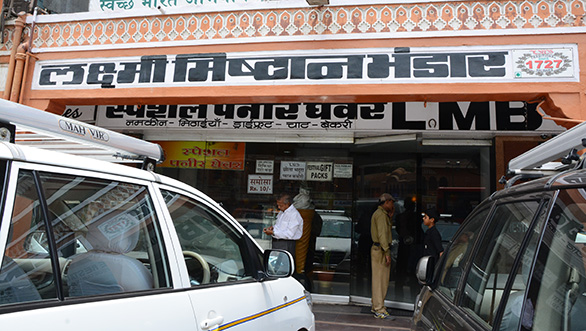 The third checkpoint was Jaipur's famous sweet shop Lakshmi Mistan Bhandar. Here the task was to finish a raj kachori. All four of us had a strong appetite and were confident of finishing it on breath until we spotted the real deal. It is an overdose of pakodi, aloo bhujiya covered in curd, namkeen, and sweet chutney and is mouthful. The last checkpoint made us travel to old city to the most popular Lassiwala who has been operating since 1944. Considering the sheer size of the earthen glass and the amount of cream that the lassi had, finishing it wasn't easy but at the same time was nothing like I have had before. 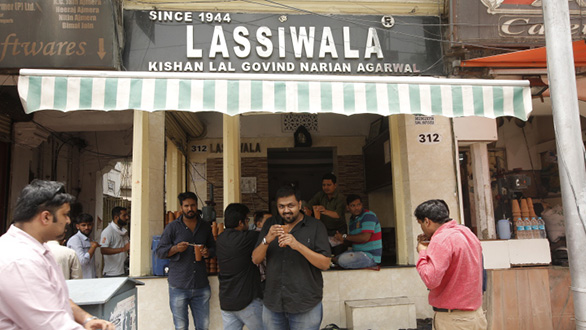 There was just one task left before reaching our hotel. We had to tank up our cars to find out how much fuel was consumed in these two days. With the number of misses and the enthusiastic driving, we ended up consuming the most fuel compared with other groups. However, we did explore more of Jaipur than the others. The overall experience was truly amazing. The camaraderie, the drive and the tasks were something needed to break the monotone of daily life.