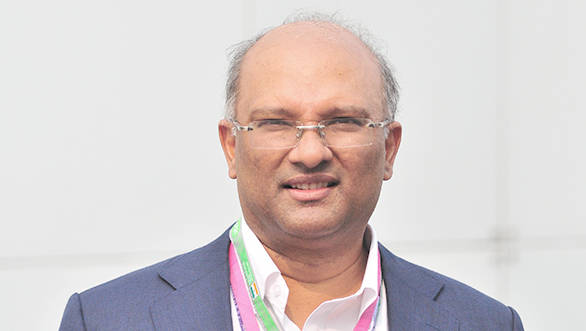 OD: So why has MRF always been so involved in motorsport?

OD: Can you tell us, in detail, about the resources allocated to your motorsport operations?

AM: We do have a motorsport division as such where we have a group of people handling motorsport. We're involved in so many categories of motorsport, right from go-karting, motocross - we make tyres for all this. Every event in which we take part, it is on MRF Tyres. So there is a lot of development and technology involved in this. We are in racing, we are in saloon car racing, we're in the APRC, Indian rallying. So we're in a lot of categories.

OD: Do you believe the involvement in motorsport changes the way people perceive the brand?

AM: As you've seen what happens in Formula 1 and various other forms of motorsport, there are various aspects. There's rush, speed, technology, high performance. And of course, overall motorsport is a very exciting sport. It also comes down to really demonstrating our tyre technology. Of course, people perceive it in the way I said. The image of the company, the image of the product goes up. And it helps us demonstrate all that.

OD: Can you tell us the immediate plans for the future?

AM: As you know we are now in this category - the MRF FF1600 is the National Championship. We've been running that for the last three years or so and we will continue to do that. It really is the stepping stone for young drivers who want to get into the platform of racing in the overseas market. There wasn't really a category of racing in India earlier for them to demonstrate their skill. You can't just jump from a small go-kart to say an overseas series. You need an intermediate category to get into a higher category in the world market. That is why when we do the 1600 category, it helps the Indian drivers to learn and also to experience what single seater racing is.

Apart from the 1600 category we also have the MRF 2000 which is really a championship we have probably managed to make the best in Asia. It is the fastest single seater car in the whole of Asia, in terms of speed and everything. We did the support series for the Indian GP for the last three years, and last year we took the championship to Bahrain for the first time. We went to Delhi, did the Formula 1 support races, then we went to Bahrain, we did the support for the World Endurance Championship, then we did the support for the Bahrain Gulf Series and then we came in February to Chennai. Yes, this year also we plan to do that. We plan on going to Bahrain again and we are also planning to go to Qatar. We will come down to Chennai - it will be a 14 race series. That is what we plan on doing for the MRF 2000.

As you know we are taking part in the APRC, we won the championship last year. This year, as of now we're leading.

OD: Are there any plans to revive your domestic rallying team?

AM: On the domestic rallying scene we're currently supplying tyres to almost all the competitors. So really, all the cars that you're seeing on the Indian rallying front are running on MRF tyres. Apart from fielding a team, practically everyone is running on our tyres, so as of now I think that's fine for the time being. We don't have any plans of running a team in Indian rallying. But maybe that's something we can look at in the future.

OD: Are there any plans on backing any young drivers who have risen through the ranks of your single seater series?

OD: Are we likely to see new categories emerge at any point?

AM: For single seaters - no. We have got an entry level, which is the 1600, which is the National Championship, and we have a 2.0-litre, which is the fastest single seater in Asia. And it's pretty fast! In fact I wouldn't be surprised if the drivers who have driven in the MRF 2000 category are knocking on Formula 1's doors in the next two to three years. You had John Lancaster, Tio Ellinas. I'm sure in the next two or three years some of them will be in Formula 1. There's nothing in between the 1600 and the 2.0-litre. You know, if they do well in the 1600 then they have the opportunity to get into a 2.0-litre car which is a very fast car. And in that category, most of the drivers are international drivers. So it really shows an Indian driver's skill. Because you can gauge where you stand.

But in the 1600 category, most of the drivers are Indian drivers, so it is more of a learning series. All of them are in the age group of 16 to 20. So when you get into the 2.0-litre where the category is more international, the drivers are from all over the world - you have Japanese, Belgian, English, American drivers. Practically we have drivers from all categories. That really will help when we pit Indian drivers against foreign drivers. And also, when we take our championship overseas. In fact more and more centres are looking at MRF to run our championship there. As I said, we did Bahrain and this year we're looking at Qatar. And we're positioning this as a winter series. During the summer months they're busy in Europe, but then when their series gets over in September, they have a lean period for the next five to six months. But when we run our series between November and February, it keeps all the drivers in touch with the cars. So then it helps them to be not very rusty ahead of the next season. That's how we're positioning our championship as a winter series in India as well as the middle East.

OD: Can you tell us what other countries are looking at the MRF 2000s?

AM: If all goes well, next year we might add one or two more countries to our championship. And we are also looking at running the Formula 1 support races in other countries as well. There are opportunities, it matters about the timing. We are a winter series, so we need to check how many races fall during those months. We need to look at so many aspects in terms of which Formula 1 event we tie up with.

OD: What has the global response been to the MRF 2000 category?

AM: Very encouraging. We never thought we'd get so many foreign drivers to compete in our series. If you look at it, it's not an Indian event, we've got at least 10 different international drivers taking part in the championship.

OD: And have there been Indian drivers in the MRF 2000 who have impressed you?

AM: Parth Ghorpade and Vikash Anand have taken part in the past. I think it really helps you understand where you stand. When you drive among other Indian drivers, you think you are good. But when you put yourself among the world standard of racing drivers, that really shows you where you are and it's a great opportunity for Indian drivers to showcase their talent.

OD: Is there a programme in place for driver development?

OD: What about your two-wheeler racing operations?

AM: We supply tyres to motocross riders, but we don't field a team in any of the championships. But we supply riders tyres. It is a great place to showcase our tyre technology.