Interview: Sebastien Ogier talks about the success of the Polo R WRC

Sebastien Ogier is a man on a mission - to defend his World Rally Championship title in 2014, and to make sure that he wins every rally along the way while at it. Well, nearly every rally, given that Volkswagen team-mate Jari-Matti Latvala has won two of the seven rallies held this year, with the other five playing nicely into the hands of Ogier. The 2013 WRC title holder, however, is a busy man and we managed no more than five quick questions before he headed off for the power stage on the Friday during Rally Poland. And we got lucky that Seb managed to answer any of our questions at all, what with Latvala jumping a fence and running away from us. We're only joking, we're (almost) certain that he had a very specific call to answer. Here's what Ogier had to say to OVERDRIVE, though: 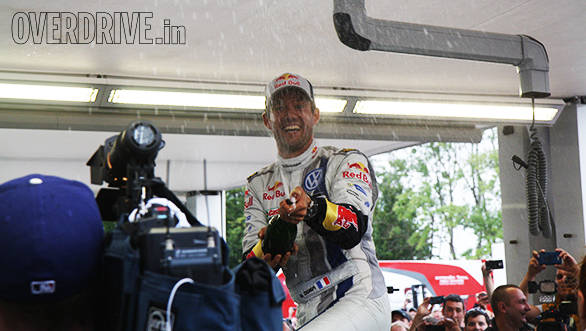 OD: When you started out last year, did you have any idea of the sort of success you would achieve with this car?

SO: No we were hoping for it, but for sure it was a surprise to be immediately on this level. That's for sure. But then the most difficult in sports is to stay on the top. It's hard to reach it, but it is hard to stay on the top. So we have to keep pushing and working hard like we are doing for the past two years.

OD: But what was the biggest challenge for you last year?

SO: The biggest challenge it was I don't know, like you enter a championship with a new team and new cars so you always have a little doubt that the new team cannot be perfect. And you always discover new things on the race that you have never seen during the test. But I'd say the team has done a really fantastic job, because we almost had no mechanical problems, so it was really impressive for the first season.

OD: And you were also involved in the development of the car. Do you think that gave you a slight edge over your team-mates?

SO: For sure it was important. But I mean I took this decision to lose one year somehow, and to come back even stronger in 2013. For sure it helps me better. But I believe also that the car is not so different from another. So it's also not so difficult to adapt it to your driving style, and have it set up the way you want.

SO: Yeah, of course it was a little bit frustrating, but I forgot it immediately at the beginning of 2013.

OD: And is the pressure on you greater this year because you have to defend the title?