Ninety-nine is a more than respectable age for absolutely anything. Which is the reason that the 2018 edition of the Isle of Man TT is so significant - the great race is now just one year shy of a century. And while other entities might celebrate their 99th birthdays by polishing their dentures and shining the handles of their walking sticks, metaphorically speaking, the TT, naturally, has no such intention. 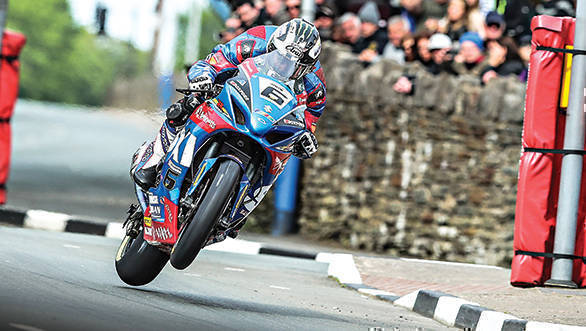 Sorrow
A couple of big, significant names are missing from the 2018 Isle of Man TT, the most prominent of whom is John McGuinness. The 23-time TT winner (second only to Joey Dunlop who had 26 TT wins to his name) is known for speaking his mind, being a good sport, and also for being frighteningly fast. It's no wonder that he's a firm fan favourite at the Isle Of Man. 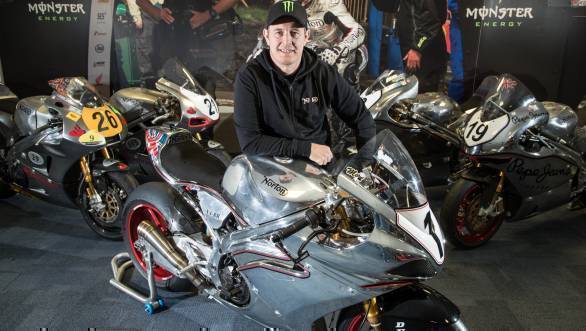 John McGuinness, despite having signed with the Norton team to compete in the 2018 Isle of Man TT, will have to sit out the event with an injured leg

Which is why the Morecambe Missile (who we managed to interview at Macau a few years ago after which the interviewer being so inspired by McGuinness' tales of facing ones fear went and jumped off the Macau Tower), who injured himself really badly in an accident at the North West 200 last year, and then more recently hurt that injured leg this year, will be missed at the races. McGuinness had signed on to race at the TT with Norton, but with his leg not fully up to the challenge, he will be missing the racing this time around. He will however be present at the event, signing autographed copies of his book, if you happen to be around and are hankering to meet him. He's not the only one who won't be racing though. Also missing in action is New Zealander Bruce Anstey. 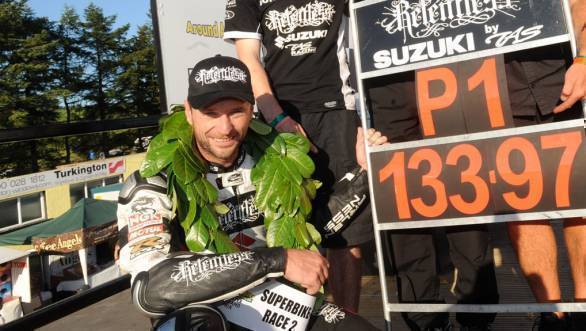 The 48-year old rider, who has won the TT 13 times in the past, has been diagnosed with cancer, and will now miss the IOMTT and the entire season of the North West 200. Anstey, who once survived testicular cancer, now has multiple tumours in his lungs and a tumour on his spine. Even though both these magnificent riders are missing from the TT this year, we're really hoping to see them recover. And we're hoping that they get to go on with their lives on their own terms. The rest is incidental. The fans will get over it.

Joy
There's nothing that makes us happier than seeing a right good scrap at the Isle of Man. And there's a really good one brewing right now. Currently tied with 16 TT wins each, Ian Hutchinson and Michael Dunlop are the two men to really watch out for this year. Hutchy will compete with the Padgetts Motorcycles team astride a Honda CBR600RR in the Supersport races, taking over the motorcycle that was meant to be raced by Anstey. 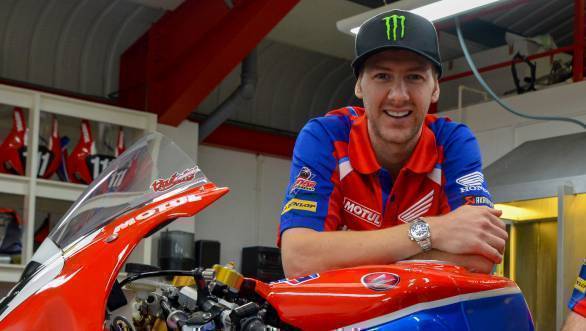 Ian Hutchinson will compete in in the Supersport races with the Padgetts Motorcycles team, and in the Superbike and Superstock events with a Honda Racing Fireblade

He gets to set off down Glencrutchery Road fourth. Dunlop, who will leave sixth, will also race a CBR600RR, this time run in his own MD Racing livery. Now, the reason there's such excitement about this race is because Hutchy managed to take victory at all four Supersport races in 2015 and 2016, while Dunlop, between 2012 and 2017, managed to win five races. This means that we now get to see both riders on near-identical race machines, go out and do their absolute best in their quest for glory. In the Superbike TT and the PokerStars Senior races, Dunlop will race a TAS Racing-prepared Tyco BMW S1000RR. Hutchy will ride a Honda Racing Fireblade in the Superbike and Superstock events. Both riders will be looking to rack up more TT wins, upping their tally!

Anticipation
The excitement at the IOMTT isn't restricted to the riders who go it alone. Didn't think we'd forget the crazy individuals in the Sidecar TT, did you? The Sidecar TT has been dominated almost entirely by brothers Birchall - Ben and Tom - over the last few years. The duo return this year, hoping to notch up their fifth and sixth TT wins, and have largely left their race machine as is. But there's competition aplenty, especially via a certain Frenchman named Dave Molyneux, and his human ballast Dan Sayle. 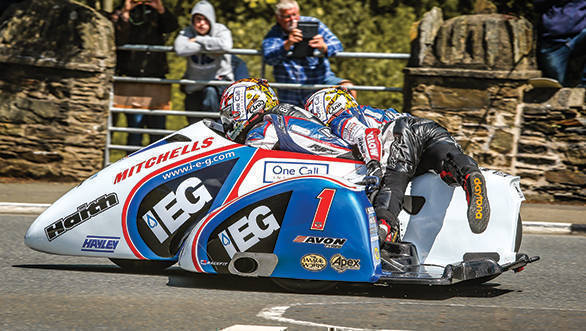 The Sidecar TT superstars have managed to claim a whopping 17 wins at the TT, and aren't looking to slow down any time soon. For 2018, the duo have a new machine they call the Batcar, that they've shaved 30kg off. Other adjustments include more space for Sayle to lie down, and weight redistribution to make their machine even more aerodynamic. Waiting with bated breath for the Sidecar TT races? We sure are!

Fear
It's impossible to follow the TT without a good deal of trepidation. After all, this is one of the most dangerous motorsport events in the world. Riders average speeds of approximately 130mph (210kmph) on narrow roads. At the TT, there is no run off area, no gravel trap, no astroturf. A single mistake can result in death. Riders have to contend with sidewalks, lamp-posts, the sides of buildings, and stone walls all across the track. 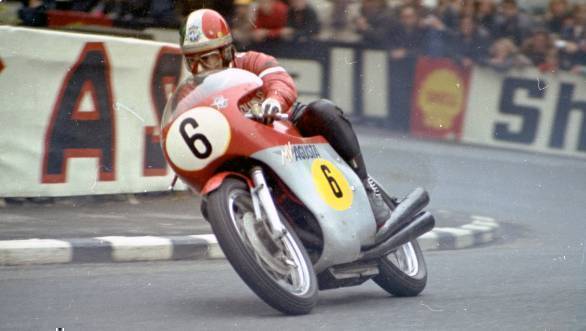 And that's just par for the course. Ballaugh Bridge, for example, is a part of the Snaeffell Mountain Course where riders end up airborne for a bit. It's also the site of Bob Price's tragic death in 2014, and the place where the most horrific accident in the TT's history occurred. Back in 1986, a rescue helicopter ended up scaring a horse on the island, which then jumped a fence and ploughed right into Gene McDonnell. Other oddities of racing on the Isle of Man, in the past, included the fact that there was even an actual gate at Keppel Gate years ago, and the first rider down the course was responsible for opening it, while the last rider of the day had to close it. Island quirks aside, eight riders have been killed in the last three TTs. This means that the TT has now claimed 146 lives, a number that goes up to well over 250 if you include the figures from the Manx Grand Prix. A figure that has had one more number added to it after the fatal crash of Manx rider Dan Kneen at the Superbike TT qualifying session on May 30, 2018.

Surprise
A whopping 52 TT wins, and 140 podiums, exist across the entire grid of 2018. This includes a certain Connor Cummins, who has been allotted the start number 1, and will be the very first rider to head off down Glencrutchery Road in 2018. The Manxman had a good year at the TT back in 2014, and he'll be hoping to get back to his former podium-scoring ways this year. But there are other riders who deserve a mention here, beyond just Dunlop and Hutchy. Three other riders who have managed to clock upwards of 132mph are part of the current field. 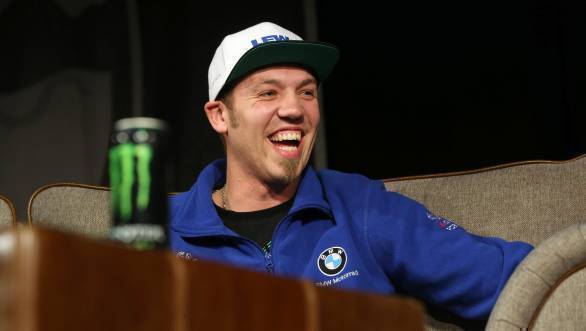 This includes Peter Hickman, who races for Smiths Racing BMW, who managed to finish on the podium in all five races he competed in last year. Dean Harrison of Silicone Engineering Kawasaki managed his first 132mph lap last year, and also managed to finish third in the Superbike and Senior TT races in 2017. And James Hillier of Quattro Plant JG Speedfit Kawasaki, who starts second, will be looking to recover from the near miss he had last year, when a refuelling issue during his first pit stop lost him a chance at the podium. The other seeded riders in the top 10 include Michael Rutter (who took the Lightweight TT win last year), Gary Johnson, Dan Kneen and David Johnson.

Admiration
You can say what you like about the riders who choose to compete in the Isle of Man TT - that they're crazy, that they have a death wish - and you can say a lot about the event itself - that it's crazy, that it should be banned. But then you're not making any allowances for free will. 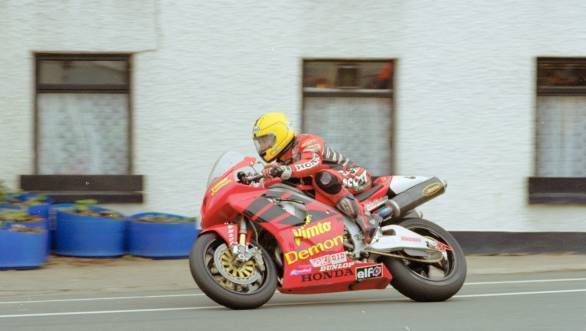 IOMTT legend Joey Dunlop, whose record 26 number of TT wins, is yet to be equalled.

And the terribly brave individuals who compete in the Tourist Trophy deserve your respect and admiration, because they, for some reason, choose to do this. They accept the risks, they know the dangers, and they will ride at the TT no matter what. It's a peculiar thing, a sport that is awe-inspiring and terrifying all at once. We reckon this makes the TT what it is.