Learning to ride the ATVs in India

You know that feeling from kindergarten? The one you got just before sliding down on your behind from atop the tallest slide in the playground? That moment of indecisiveness where you doubt whether you will survive to see your fourth birthday. Remember it? Now multiply that by around 247 and you will know what I am feeling right now. 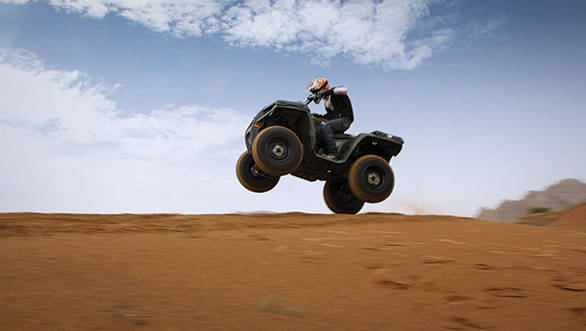 All I can see is the crest of the dune. Of course I had taken a look on the other side to figure out exactly how I should come down the hill. But what if my calculations were wrong? What if Raj wants to kill me and take all my money? What if the gremlins had dug away that nice little incline and made a deadly cliff there instead? What if I die!

Suddenly, Raj comes up behind me and says, "Just make sure you go down on your brakes. And always keep your weight towards the rear." Then he follows it up with a question. "Are you scared?"

"Of course not. I laugh in the face of danger. I crave the rush of adrenaline. I live for this sh*t!"  That's what I wanted to say. But what came out instead was a barely audible "no" accompanied by my head bobbing up and down. 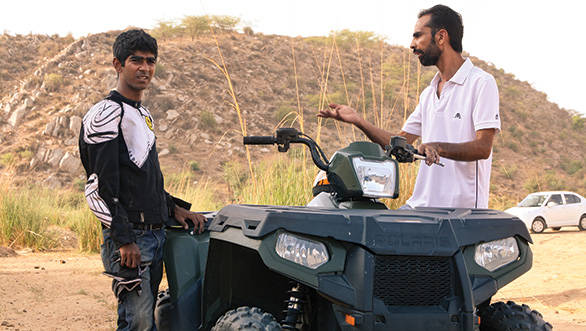 Raj explains how to shift weight while going up an incline

So, what am I doing on top of a 100-foot dune? A few weeks ago, I decided I wanted to learn how to ride an ATV. What's there to learn you might say. Well, you'd be surprised. I didn't merely want to learn to ride one. Anyone with an opposable thumb can do that. I wanted to learn how to push the ATV to its absolute limits. And who better to learn from than the man himself - Raj Singh Rathore. He makes the term multiple Raid de Himalaya winner seem like just another day at the office. He was also one of the first people in India to take an ATV to the Raid. Oh, and he beat some of the most famous names on two wheels while at it. But then just the teacher isn't good enough. The right tools are also of equal importance. 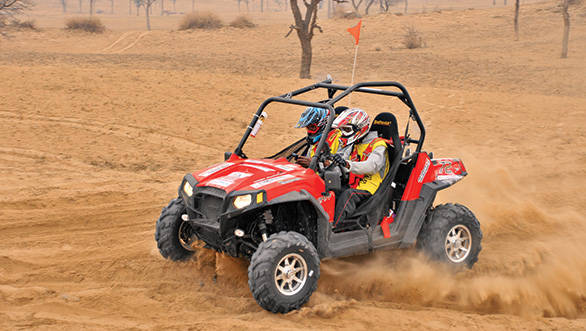 Ask anyone about ATVs and they'll all point to one name that stands out far above the rest. They call their offroad vehicles the world's best. We believe them. Raj does too. He swears by Polaris. He's been rallying them for a very long time. He started off rallying motorcycles and then moved on to ATVs. But recently he made the switch to side-by-sides and made appearances in rallies like the Mughal Rally and the Desert Storm. These days he's terrorising some of the best names in the four-wheeler rallying scene in his Polaris RZR 800.

But side-by-sides are a different ball game altogether. What I wanted to learn on was a full blown ATV. And for this, the folks at Polaris lent me the Sportsman 400 HO. The Sportsman is a 455cc, carburetted devil with on-demand 4WD, hydraulic discs on all four wheels and an electronic throttle control system. It runs on Carlisle off-road tyres and makes enough power to put most Indian motorcycles to shame. 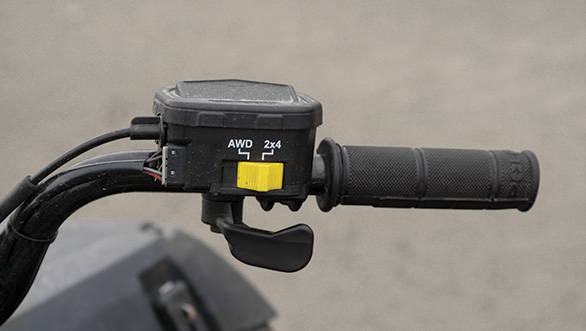 It takes a while to get used to flicking your thumb instead of wringing your wrist.

The "training session" started off with Raj taking me to a small sand dune on the outskirts of Jaipur and sending me out on my own to get familiar with the Sportsman. The most confusing thing about piloting an ATV is the thumb throttle. It takes a little getting used to. Before I set off, he cautions me though. It is very different from a motorcycle. You always lean against the direction of the turn. And as for counter steering - it doesn't exist on an ATV. If you want to go left you turn the handlebar left. If you want to go right, you turn it right. Simple enough? Not quite. 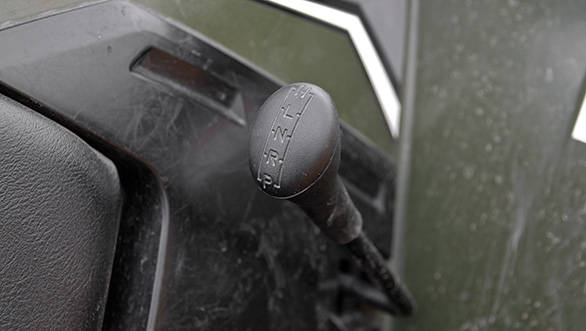 The Sportsman gets low and high ratio gears.

As I breezed over the tiny little dune that we were on, it all felt fairly easy. That was until the time came to turn the thing. Up ahead was a little bush with thorns all over it. And as any sane person would want to, I too wanted to steer clear of it. I wanted to. But the ATV didn't. An ATV requires a fair amount of strength for direction changes. It's not like a motorcycle where a slight pressure on the bar will have you leaning nicely into the corner. Brute force is the name of the game. Needless to say that this particular game ended with me pulling out thorns from my behind.

But from there it got better. I soon got the hang of how to turn the Sportsman without ending up in the bushes. The trick was to apply a little pressure on the footboard against the direction of the turn. It gives it that little push that allows you to make tighter turns.

Once I had managed to learn how to corner the machine I came back to Raj for the next lesson. I could see him in the distance, waving to me. As I rode up to him I realised that he was pointing at a dune that had at least a 45 degree gradient. He had to be kidding. I've been riding this thing for only a few hours now. There is no way he would want me to climb an incline like that.

Turns out I was wrong. He pointed at the dune, asked me to put the Sportsman into low ratio and gun it. "Just go as far as you can. When you're climbing up, put your weight towards the front end. When you feel the wheels spinning, just keep the brakes held. Then slide it into reverse and roll down the hill slowly." Easy peasy lemon squeezy.

The first few times were fine. Then I decided to be brave. I gunned the throttle for all its worth and went up the incline. I kept going and going. I was almost halfway up the dune when it finally bogged down. I was pretty pleased with myself. Until it was time to head back down. Suddenly the 50ft I had climbed seemed like 700. Now I had to creep down the dune at snail's pace with head turned at an angle that made 'The Exorcist' look like child's play. All the while hoping that the Sportsman doesn't flip over and squash me like a bug.

It took me somewhere around 10 times as much time to come down than it took me to go up. Climbing down in reverse is something that you can never get used to. In the two days that I spent riding the Sportsman, I could never get the hang of it.

And it's not just climbing down them in reverse gear. I couldn't get used to descending the dune front first either. Hence, the predicament I am in currently. 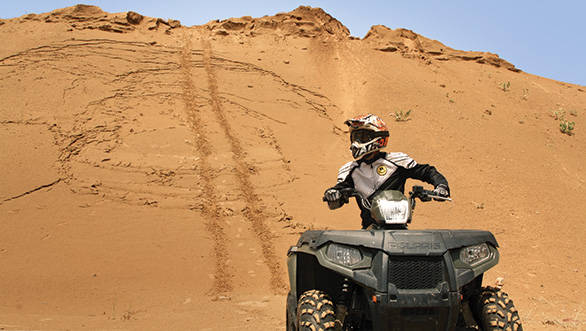 I keep muttering to myself "put all your weight on the rear axle" repeatedly. I'm inching forward. Every throttle input is followed by a much more aggressive hand on the brakes. I still can't see the other side of the incline. I'm going on just faith now. I strain ahead and see the front left wheel go over the crest. But all the weight is still towards the rear. This meant the front left corner was just hanging in the air. Uncertainty turns to panic. I take a few moments to compose myself and then start thumbing the throttle again. The front right wheel is about to clear the crest. A little more throttle and the centre of gravity has cleared the crest and the ATV slowly starts to tip over onto the other side of the dune. For a moment my heart stops and everything turns into slo-mo. Then with a soft thud the front wheel makes contact. But now the rear right wheel is in the air. I slowly start moving ahead and eventually the ATV is back on all fours. I take a moment to catch my breath. I can see Varun standing at the bottom of the dune. He looks smaller than a tiny GI Joe figurine. That's how high up I am.

"Aap jaa rahe ho ya nahin?" It was time. I quickly send up a prayer and thumb the throttle. As I start descending Raj shouts out "use the rear brake!" It makes sense amidst all the nervousness. Front brakes while on the way down an incline might make the ATV tip over and land on top of you. I step on the brake pedal and start rolling down the dune. Slowly at first. But then the momentum starts building up. Faster and faster. With every passing foot, I start becoming braver. Now I'm halfway down the dune and I'm feeling pretty good about myself. I start thumbing the throttle. The Sportsman approves. I decide to indulge a little further and open the throttle more and more. Suddenly I'm feeling more confident. By the time I'm at the end of the dune I have the throttle open all the way. Mission accomplished. 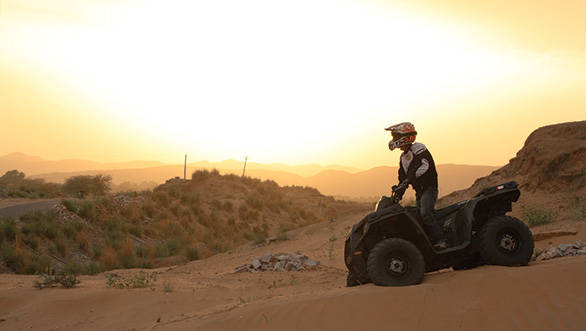 By this time I was feeling pretty good about myself. In my books, I was right up there with the Rossis of the ATV world. That was until I saw Raj having a go at it. He was up the incline, over the crest and back down the dune in the time it took me to take my gloves and helmet off.

There's still a long way to go for me. I doubt I'll ever be as good as Raj at this. I'll just need to get as much practice as I can. Because come September, OVERDRIVE is going to be heading to a desert of a different sort. It's gonna be - wait for it - LEGENDARY!