Levels of Performance: How TVS turned the street-friendly RTR 200 into a racebike

How does performance increase? How does a manufacturer decide how to organise the difference in performance between their small and full-fat sportbike? How does time change the performance equation? It was these and many other juicy questions that led us to the Madras Motor Race Track, or MMRT, outside Chennai.

To ease into it, we have the two TVS Apache RTR 200s. The red is completely stock and the blue one is the racebike that Rishabh races in TVS' racing series. They're closely related but as you will see the gap between a production bike and a race bike can be narrower than you think.

TVS isn't the first manufacturer to take a production motorcycle racing. One-make racing tends to stick close to production-spec by nature. It has cost benefits in construction as well as when a rider falls off and parts need to be replaced. If you're going to do production-based racing, generally most of the changes involve weight savings via removal of emissions-related systems, mild performance tuning and some cosmetic work. 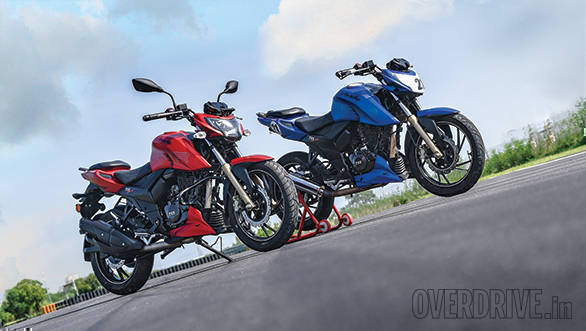 In that sense, the TVS Apache RTR 200 4V is a good bike for my job today. It's easy to ride and has good manners as streetbikes are supposed to. More importantly, despite TVS' designing it for low- and mid-range punch for street use, it proved pretty handy around the tighter Kari circuit. It's a sweet motorcycle to refresh my hazy memories of the Chennai track. And it is a good motorcycle. Performance is smooth and consistent, you can easily find a good rhythm and once you have your bearings, raising the pace is easy. 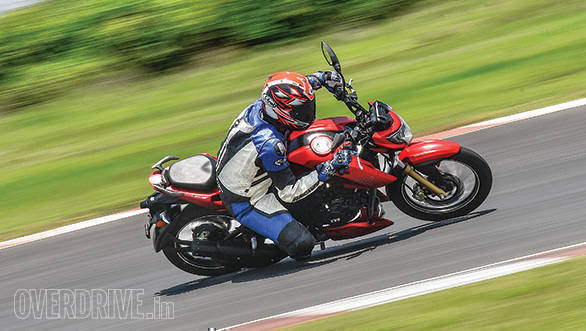 So when you jump on the racebike, the first thing you will notice is that similar throttle openings seem to produce mostly noise rather than motion. Wait, what?

It is a false impression. TVS Racing works on the production RTR and race RTR in parallel, and until the rolling chassis is final, they're more or less identical. But when you remove the low-mid focus of the production bike and switch to the mid- and top-end performance requirement of the racebike, differences appear. The racebike, to wit, has a free-flowing intake and exhaust, along with the carburettor tuning required to extract more performance. TVS tells us power jumps 3-4PS across racebikes - they're prototypes so the variation in ultimate performance is more than production motorcycles. The exhaust and other bits also drop weight 15kg and that brings, all told, a 8 to 10kmph rise in top speed.

Why does it feel slower? On the initial laps, you're using throttle openings resembling to the production bike and sitting at similar or lower torque outputs. But the extra noise doesn't match your expectation and it feels slower. As you settle into the feel and nature of the racebike, you tend to sit about 1,000rpm higher which immediately results in faster, more satisfying progress. Anand says, "The mid range on the racebike has improved dramatically. Coming out of the slower corners, getting to 70-100kmph takes vastly less time. That and less dive into the corners are the big reasons why the racebike is going so much faster around the track."

The difference between the one-make RTR racebike and the production RTR 200 4V, in overall feel, isn't that much though clearly, the racebike is much quicker around the racetrack. That's not by accident either. TVS says the racebikes in the national championships are separated further because they have more performance as well as more experienced riders. The one-make bike is a genuine racebike but it has to remain friendly enough for new riders to exploit the lighter weight and higher performance confidently.

The other benefit - I found by accident almost - is cornering clearance. Turn seven sweeps right forever and it's one of the places where fast lap times are made or squandered. On the production RTR, sitting on the edge of the tyre, I felt the bike separate from me on one lap. Oh shoot, I thought. But instead of falling away, it rose up under me. I reacquired control after a wobble and screech or two and an elevated heartbeat. The emission-friendly exhaust had scraped so hard that I'd nearly levered the rear off the ground. This would never happen on the racebike because its exhaust has miles more clearance.

But that's the thing about performance. It isn't about throwing titanium and money and getting more power. A faster motorcycle is a narrower-purpose weapon honed finely by a careful selection of updates and upgrades that refine the responsiveness or capability in small increments. As befits a small displacement production-based racebike, the essence of the production bike is obvious but the overall performance is a big step-up.