Just before the weather turned and the passes closed for the winter, the Team OD managed to squeeze in one more trip to the mountains. For the third edition of our Starstruck Drive, we planned to push the limits by heading higher than we've ever gone before in the quest to find the most pristine night sky possible. And boy, did we arrive at the perfect destination in the village of Hanle  a tiny settlement, deep in the Himalayas. But don't just take our word for it; this picturesque little village is also home to the Indian Astronomical Observatory, one of the highest optical observatories in the world. It made for the perfect stargazing experience and a great way to live life in OVERDRIVE. 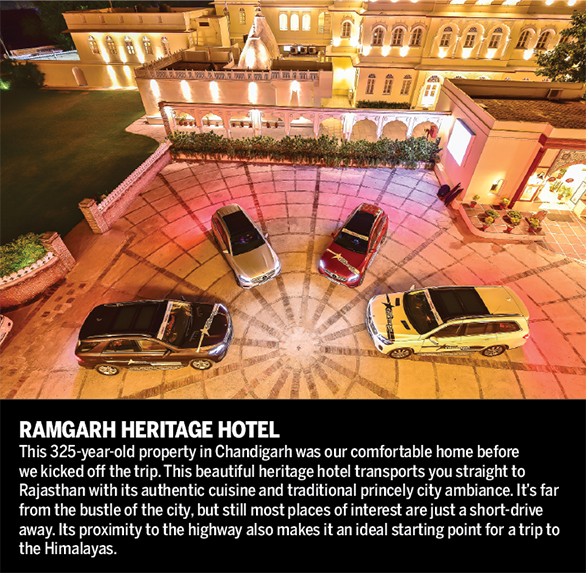 Our journey started in Chandigarh where we met with seven of our readers who would be accompanying us on the challenging but exciting drive up into the Himalayas and on to Leh. In a typical OD style, we started bright and early in the morning, making our way through the plains and into the foothills. Once on the highway, our readers started to get comfortable with the Mercedes-Benz GLS, GLE and GLCs that formed our convoy for the trip. The leisurely drive up to Manali proved to be a great experience for everyone as was evident from the smiling faces and excited chatter around the dining table at the end of the day. 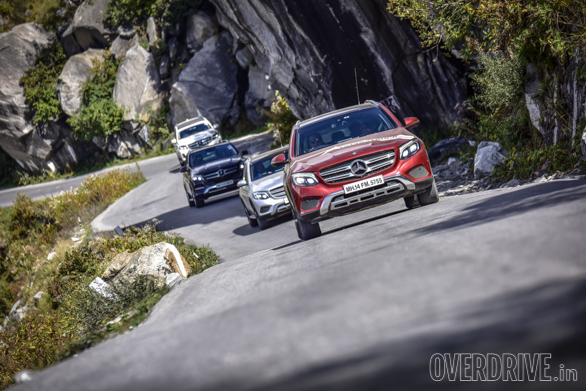 With traffic on Rohtang having died down for the year, we decided on a fairly leisurely start to the morning, and so only left Manali at eight. The day's drive gave the readers a taste of some proper off-road driving on the tight mountain roads that are typical of a journey into the Himalayas. It's always a special occasion on cresting the pass, when you're greeted with the stark landscape of the higher mountains, having left the dense forests of Manali behind. We halted for the night at Jispa and after a quick dinner retired to our rooms for the long day we would have ahead of us. 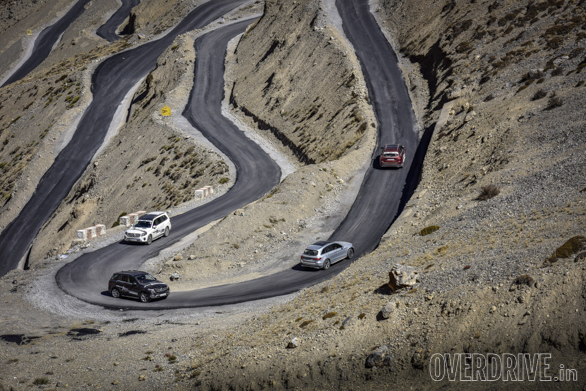 Four thirty is really early in the morning to be awake, exhaling visible puffs of air while vigorously rubbing hands together in an attempt to bring some warmth to our numb fingers. But when you have 340km of steep mountain passes (four in total and all above 15,000ft), and questionable roads ahead of you, an early start is a necessary evil. It was a challenging day ahead for our readers with some really rough terrain, but with air suspension set for best ground clearance and off-road mode selected on the Mercedes-Benz SUVs, both man and machine sailed through without incident. 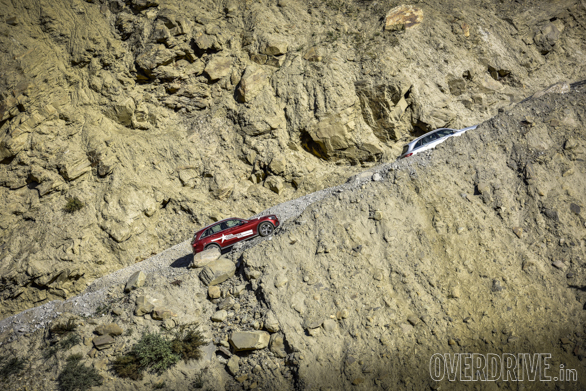 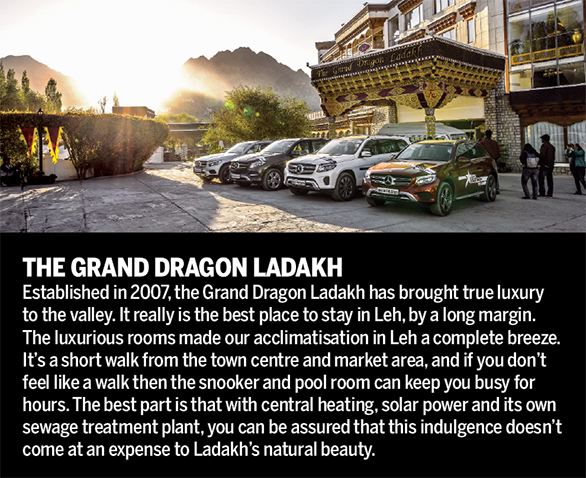 It was still a long day, and we only pulled into the Grand Dragon Ladakh Hotel, our luxurious home for the next few days, well past sundown. Two days were spent taking in the sights around Leh while acclimatising to the rarified air at higher altitudes  an essential task before we made our way up to Hanle, which is even higher than Leh, at 14,500ft. In Leh our group also grew with the addition of Jatin Rathod, an astronomer from the Nehru Planetarium in Mumbai, as well as Anil Vishwakarma and Manoj Samal, winners of a contest run by Michelin India. 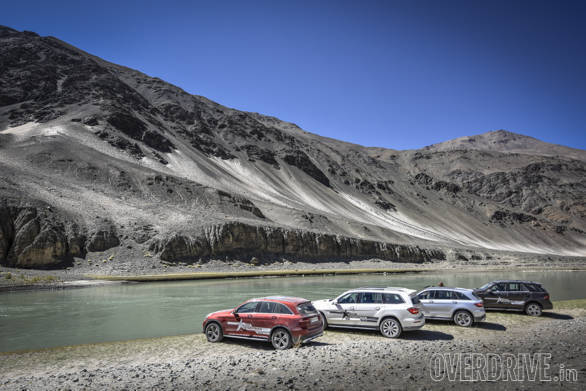 Hanle is a relatively calm, half-day drive from Leh, and we hugged the banks of the Indus River as our convoy snaked its way up into the mountains towards the Indo-Chinese border. This border proximity dictates that you do need prior permission before heading to Hanle, but it's worth making the effort as it's also one of the most picturesque routes that we've ever been on. The 180-degree views keep changing colours from valley to valley, turn to turn, and I'm sure we saw every single colour on the spectrum. One of the highlights being some stunning pink grass that had to be seen to be believed. 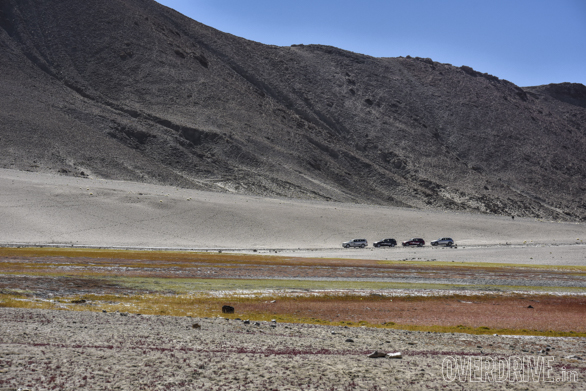 Our first glimpse of the little town was the 17th century Hanle Monastery that towers over the valley of Hanle with the silver dome of the Indian Astronomical Observatory later coming into sight on the top of another peak to the far east of the valley. Our camp stood at the base of the climb up to the monastery, and while it was completely surrounded by beautiful vistas, it was a fairly bare-bones camp, with just alpine tents and sleeping bags to keep the forecasted sub-zero temperatures at bay. 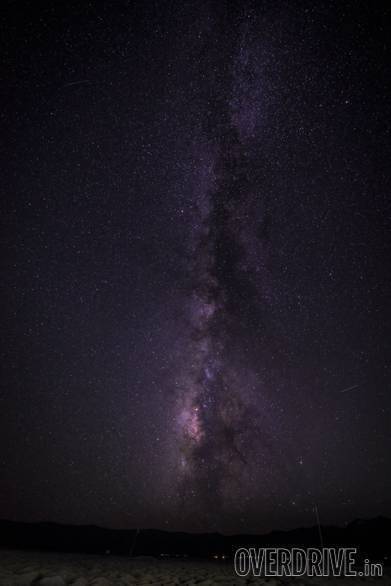 The clear, dry air allows for spectacular views of the night sky and stunning pictures of the Milky Way too

As the light faded, Jatin Rathod gave us our astronomy crash course over the sounds of branches crackling in the small campfire. And then once it was completely dark and the Milky Way was clearly visible to the naked eye, it was blatantly obvious why the Indian Astronomical Observatory chose this site. We were all soon pointing, staring and basically just gawking at the most star-filled sky any of us city slickers had ever seen. The remainder of the night was spent with heads tilted back, or crouching over the two amateur telescopes on hand before turning in after a late dinner. 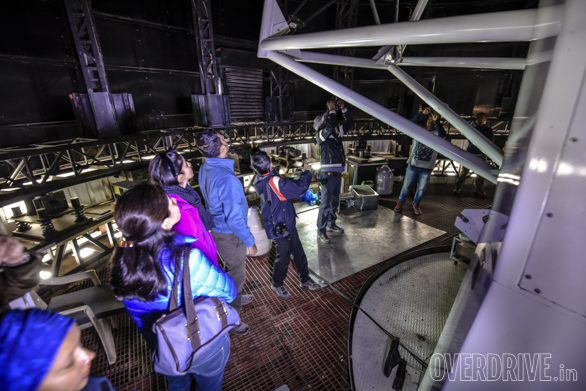 Inside the observatory, with the world's highest 2-metre diameter lens! 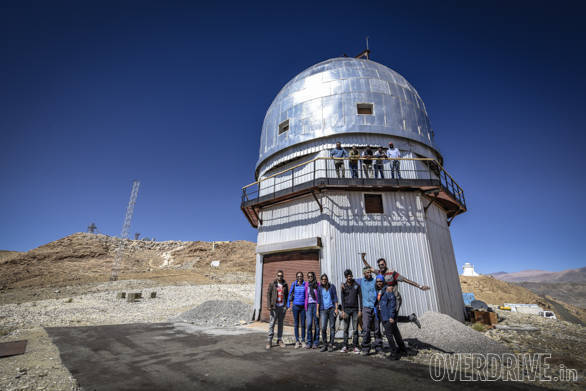 Striking a pose outside the observatory at Hanle

The next day we visited the observatory, and after startling the maintenance staff at the site, we managed to get a guided tour. Due to the remoteness of the area, visitors are few and far between, and as can be expected, a convoy of swanky SUVs filled with green astronomy graduates was a rare site for the staff. The observatory and telescope are pure high-tech and look nothing like any telescope you'd imagine, but one of the coolest things we learnt is that the observatory and telescope are both completely remote controlled via satellite link all the way from Bengaluru. It's a quaint place to visit, complete with a small informative video presentation that you watch on a laptop at the site office. But the best part is that it's free and open to whoever wishes to make the journey, though we were told that with newer telescopes being built, it may soon become a restricted area. 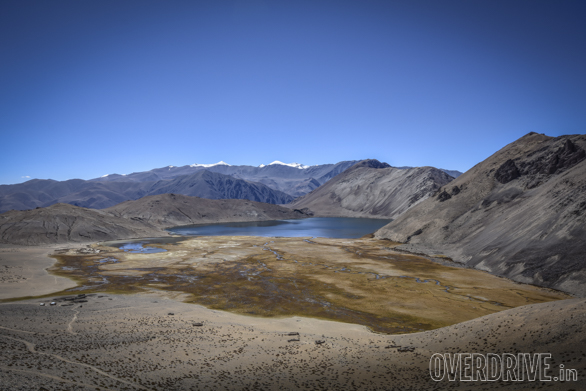 That beautiful emerald, holy Ya Ya Tso high-altitude lake

We took our pictures and the requisite number of selfies and then headed back to camp for another evening of blissful stargazing from our campsite. As expected the temperatures did drop below zero in the wee hours of the night as was evident from the frost that formed on all the tents and the bonnets of the Mercedes-Benzes in the morning. The few grumpy faces around the breakfast table soon disappeared with some hot chai and coffee, and our little group was soon in the best of spirits again as thoughts turned to the return journey to Leh and another chance to take in the brilliant colours along the way, not to mention a nice warm bed in the Grand Dragon Ladakh when we reached. Leh also signalled the end of the line for our group of readers, and from then on it was just Team OD and the contest winners who'd bask in Mercedes-Benz luxury on the drive down to Chandigarh and back into the plains.