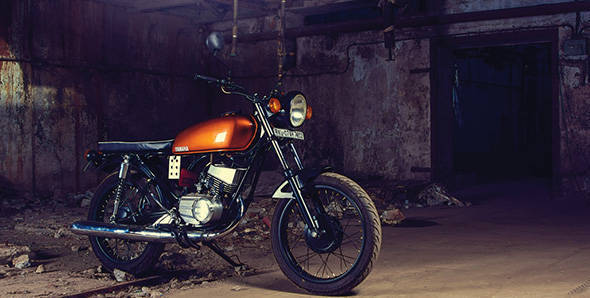 I am still waiting. The newly painted tank was supposed to arrive by eleven in the morning. It's twelve now and there's still no news of it. I call up the painter, and guess where he is - he's just gotten arrested for beating up a guy who fell from a tree onto some freshly painted motorcycle! You really can't make this stuff up. Thankfully, it wasn't my motorcycle. Phew! Dodged a bullet there. Looks like I'll have to wait till five in the evening for him to get out on bail and finish the last layer of lacquer. But what's a few hours' delay when I have been waiting to get my motorcycle up and running for close to two years?

I was working out of Pune when this whole fiasco began. I had left my motorcycle behind under the care of a friend. I figured it had to be safe there. I wanted to bring it to Pune with me, but the logistics and my schedule were always in conflict. When I finally managed to get enough time to go get the little Yamaha, I was in for the shock of my life. No, it hadn't been stolen, but what had happened was just as bad. In the six months that I had been away, somebody had come along and stolen my wheels, tyres, rear shock absorbers, all the lights, throttle assembly, spark plug, battery and even my chain. And, just to add a bit of insult to all the injury, they had replaced them all with old rusty parts from some old motorcycle.

In the two years that passed before I could start work on the motorcycle, it went through two monsoons, two mechanics and by the time I got it to Joshua Crasto's garage in Bandra, rust had claimed a large part of the frame. I decided if I didn't get it done now, it would never happen. So I dipped into my savings, every last bit of the 40,000 odd rupees, and started work.

The initial idea was a scrambler. Big front and rear fenders, high seat, knobblies, et al. But everyday usability made me change my mind. Inspiration came in the form of Joshua's Honda CD125 (the same one you saw in our May issue). The idea was to strip the bike of everything it didn't need to function. Off went the sidepanels, the airbox, the oil tank, the rear grabrail, the stock seat, the instrument cluster, the chrome rear fender, and the tail light and rear number plate assembly. Now all that remained was the frame, engine, tank and headlight. The stock 18-inch wheels were traded in for new 17-inch wheels with soft compound MRF rubber. A list was drawn out for parts and with the help of a generous and very persuasive friend we went shopping. We returned with a boot full of new parts - hubs, brake pads, brake liners, cables, throttle, handlebar, rear shocks and much more.

Now it was time for the real work to start. The bike was stripped bit by bit and everything was sent for a fresh coat of paint. The wheels and spokes were sent for powder coating and Joshua handmade new fenders for the front and the rear. Now the only thing remaining in the garage was the engine and the tank.

A lot of thought went into the colour theme. There were suggestions about a red and white theme, a yellow, white and black theme, a red and black theme and many more. But in the end, after going over at least a hundred colour options we settled on orange and black with a bit of brushed aluminium thrown in. So, off went the tank for a nice coat.

Now it was time to open up the engine and send the cases for buffing. But we were in for a nasty surprise. We opened up the block and realised that the piston had seized. When the geniuses stole everything from the bike, they happily took off with the spark plug as well. And by the time I had managed to rescue my poor motorcycle, water had already done its bit. The cylinder would now have to be rebored. Closer inspection also revealed the need for new connecting rods and bearings. On the plus side, I would now be running an oversize piston. It was time then to bring in the lathe.

Now, it was time to wait for the various finished parts to come back. First to come back was the frame. And what a sight it was. I came back from work that day to see my shiny frame sitting on the work bench, albeit without  a trace of rust. With the frame back, we could now mount the bottom half of the engine, followed by the fenders, forks and headlight, which were quickly put in place. Now, it was time to mount the wheels which had just come back after being nicely powder coated. Then the handlebar, the wiring harness and other bits and pieces went on. Joshua in the meantime had fabricated a custom bracket for the new rear fender and a brand new seat pan. Now all we had to do was wait for the block so we could finish assembling the engine.

As soon as the block came back we put it all together, fitted the carb, a new UNI filter, filled new engine oil and fired her up. For the first time in two years, I heard my motorcycle running. Everything after this was a blur. The seat, the custom tail light cluster, the custom battery box, the wiring and electricals all came together in a hurry. Now the only thing left was the tank. And my dear friend the painter had managed to get himself arrested.

It was five in the evening and there was still no word from the painter. I pestered Joshua to call and find out. He had just sprayed the lacquer on. It would take another few hours for it to dry. Nine in the night was the final word.

Tick tock, tick tock. Much pacing around and fiddling around with the other bikes later, it was time. I hopped on a bike and hurried to the painter. There it was,  the glorious orange tank with a hint of gold dust to make it come alive when the light falls on it. But wait. The painter has a warning. The lacquer has still not dried. It needs till the next morning to harden properly. Ugh! Patience is wearing thin. I make sure the tank is safe at the garage and go home to get some sleep. It's difficult to sleep and all I can think of is riding my motorcycle tomorrow. Finally, after a few hours of tossing around, the sandman arrives.

At the first hint of daylight I'm up. I'm waiting for Joshua's call so I can run to the garage and put the tank on. Much pacing around the room later, the phone rings. In an instant I'm out the door and literally running to the garage.

It takes a few more hours, but soon JcMoto 010 (this is JcMoto's tenth build) is washed and ready to go. It sits there gleaming in the sunlight, waiting for the water to dry off so I can sit on it for the first time in two years.

Sometimes words cannot describe the gratitude you feel. And this is one of those moments. I really don't know what to say to Joshua. I think he sensed it. He just says, "Go ahead, take it for a spin." I start her up and slot it into gear. I breathe in the sweet smell of burning premix. My mind is filled with so many thoughts. As I let out the clutch and feel that familiar surge from the motor there is one thing that I was sure of - if I had to do it all over again, I wouldn't do even one little thing different. I guess some things are just worth going broke for.

To build your own custom motorcycle get in touch with Joshua at +91-9820602435 or joshuacrasto@gmail.com or at his website www.jc-moto.com.