On the final day of the Frame the Star face-off, Prasad Np aka desi Traveler, captures some rare bonhomie among our contestants, who even while competing show us that it is not cricket but photography that is a gentleman's game. 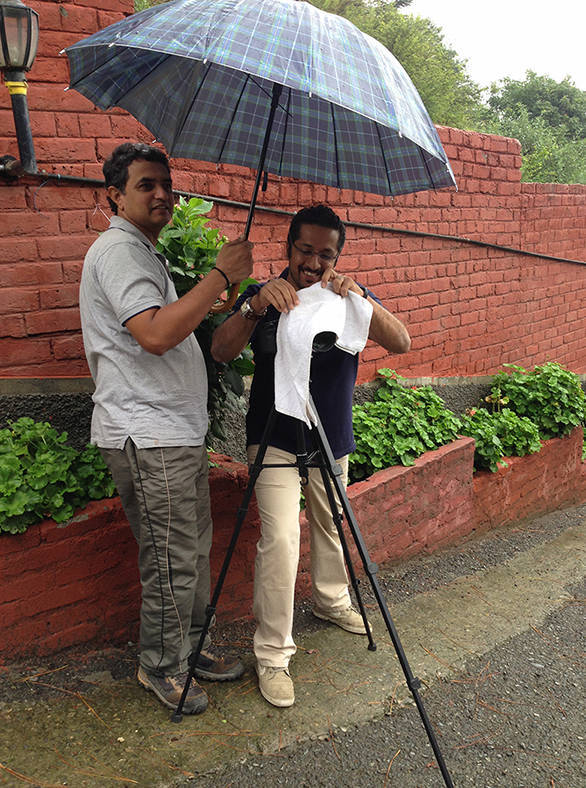 The final day of Frame the Star face-off started with more rain. But as always, it failed to dampen the spirits of our three finalists -Altaf Khan, Raju A K and Kevin Nunes. They were up in the morning, ready to shoot both inside The Chalets, as well as in the great outdoors of the Himalayan state of Himachal Pradesh.

Now if we believe some of the reality TV shows in most live competitions, contestants are almost always on the edge and very bitter about their opponents. Everybody tries to win, some fair and square, and others by all means. Here at the Frame the Star contest finals also, we saw some fierce competition. The contestants worked in rain in Chikamagalur and Naldehra, and in the sweltering heat earlier in Jaipur. But one good thing was that all of them were competing in a very healthy manner. While during the day the contestants were busy clicking their pictures, in the evening it was time to sit together, bond and discuss the images, share photography tips and a drink or two.

On the last day of the contest, as Altaf was shooting his steel grey Mercedes-Benz CLA in the compound of The Chalets, it started raining. And before he realised, Raju held an umbrella over Altaf's head so that he could continue to click pictures without worrying.

I was cozily enjoying some music inside the car when I saw this scene between the two contestants from the raindrop covered window of the car. It is not easy to win a contest like Frame the Star but it is even more difficult to make friends out of competitors! But to our contestants, both come naturally and I am now waiting to see whose pictures the judges will like the most, and who will drive home a Mercedes-Benz CLA for a year.

After breakfast we all decided to head to Park Plaza in Chandigarh in hope of some better weather to click pictures. But here also each participant decided to take different approach back to Chandigarh. While Altaf and I came straight to Chandigarh as he wanted to buy some props to click one final picture, the others went to different routes hoping to catch some good location on some of the rural roads.

Post dinner we were all up chatting and laughing like childhood buddies till two in the night when I excused myself as I had an early morning flight to catch. But one thing is for sure the friendships and the bonds that were formed during the competition will last for a long time and I am sure these passionate photographers will remain in touch with me as well as with each other.

Let us wait for the results to come out till then happy clicking to all of you!

Prasad Np is a passionate photographer who enjoys photographing people, wildlife and travel destinations. He is the author of the travel and photography blog called desi Traveler. You can connect with him on Instagram and on Twitter @desiTraveler.