There's a lot of attention being spared on this new platform or chassis that Mahindra has developed for the new Scorpio. What's the big deal? Well going by what all Mahindra intends doing with it, the deal is pretty big but here are some interesting facts about this new chassis.

This chassis is still a ladder frame design but significant changes improve what it is supposed to do. The primary change here is that it's torsionally stiffer, stronger and lighter than the older chassis. This has come about thanks to newer manufacturing practices such as hydroforming. What is hydroforming? Very simply it's the use of a high pressure hydraulic fluid to shape ductile metals. This process makes the finished component lighter, stronger and more rigid. It's a highly valued manufacturing process in high-end sportscars and only recently has found more acceptance across segments thanks to it being a more cost efficient process. The new Mahindra Scorpio chassis, as a result, is nearly six kilos lighter than its predecessor and a 100 per cent stiffer.

The chassis is not all new, at least not 100 per cent new. The chassis is sort of modular and that allowed Mahindra to refine certain sections and leave other sections as they were. This modular chassis also lets Mahindra apply it to various combinations of vehicles. The chassis is divided into three regions, the front end which supports the engine, transmission, suspension, steering and other components. The middle section which serves the main cabin area and the tail section that supports the rear suspension and the boot area. Of these three sections, the one at the front is entirely new.

The suspension technology has also changed. The previous generation Scorpio used a different architecture for the shock absorber and coil spring. That has been changed to a more conventional design but with better damping characteristics and optimum mounting points to improve ride quality and dynamic ability. There is also an anti-roll bar at the front which has reduced body roll but by a very small margin.

This chassis will be adopted by several other vehicles offered by Mahindra. In the more immediate future, we've been told, there are three other vehicles that are to come with this chassis. The compact Scorpio will be one of them as will be the new generation Xylo. Will the forthcoming Quanto, expected to be in markets before the end of the year, have this chassis? Mahindra officials refused to divulge details on that but I do suppose it's possible since work on this chassis has been going on for the last three years. This chassis will not be supported by the Mahindra Scorpio Getaway which will continue to employ the older chassis. Neither will it be adopted by the XUV500 since that is a monocoque and not a body-on-frame structure. 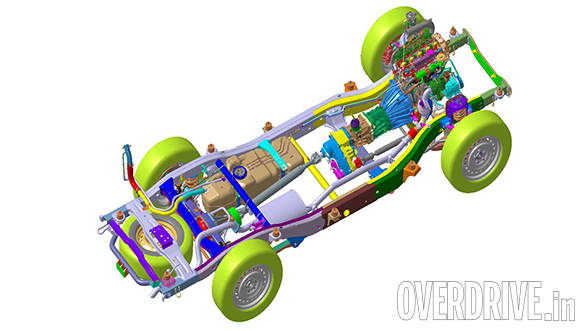 The new chassis dimensions have changed, it's wider but not longer. So track width has increased to provide better stability and a shorter turning radius. The wheelbase however is still the same, principally because of that middle section. This key area hasn't gone through any modification to allow Mahindra to keep the development costs lower than expected. Had they changed this, then certain body panels like the doors, roof and even interior panels would need a complete overhaul which would have increased development costs and subsequently the cost to the customer.

To improve refinement and durability, Mahindra got rid of the rubber bushes, replacing them with polyurethane ones. These are more durable and have better damping abilities than rubber. And given that the Scorpio does take quite a beating on our roads, these polyurethane bushes also hold their shape for much longer than rubber.

So there you have it - the insights we gleaned from company officials about the new Mahindra Scorpio's new chassis. Stay tuned to OVERDRIVE for more on the popular SUV.

More from OVERDRIVE on the new Mahindra Scorpio