I only received my registration the night before the IBW began in Goa. At this point, Alan had already left and I thought, "There is time, I can still make it." Having left at 5:30 in the morning from Mumbai with a new number plate and only 50-odd km on the odo, I was on the way. Seven and a half hours later, my bike was parked at the Indimotard stand. IBW wrapped up, I rode back with Alan and a former colleague over an agonisingly slow 12-hour ride, and then promptly, four days after registration, gave Ferocitas its first service.

What have I noticed? Nothing especially startling. The KTM isn't very spacious and when you load luggage, it can be difficult to move around and find comfort. The hard seat wasn't  as much of an issue as the forums make it out to be. It's only after eight or so hours on the way back that I finally needed to take breaks to relieve my bum. What makes you take lots of breaks, actually, is the fuel tank. I tend to run from a full tank down to a quarter tank and depending on how you ride, this is between 180 and 210km only. Goa, for instance, about 600-650km from Mumbai requires three en route fill ups. 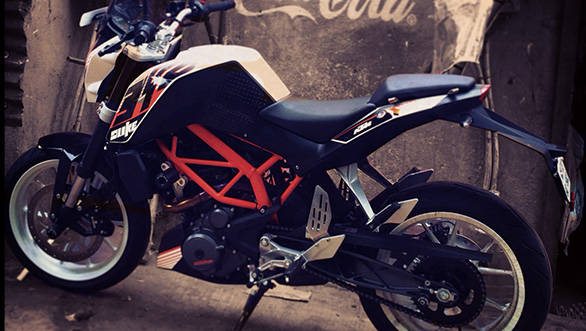 But I found a neat trick too. On the way out, alone, I was enjoying the tremendous power of the engine and caning the brand new engine with unbridled enthusiasm. That showed as range on a fuel tank reading just 188km. On the way back with a slow rider and Alan on our Honda CB Trigger, I decided to ride more like a human being. And I found that if you don't use full acceleration everywhere and instead allow the KTM to build up to speed calmly, you can cruise at surprisingly high speeds, while enjoying a range readout that will go as high as, wait for it, 262km!

Finally, a word on the tall screen. I did spend Rs 2,550 on it and my intention for it was simply to make it the world's most expensive number plate and eliminate the white plastic bar across the Duke's forehead. However, I found that the screen doesn't offer any significant wind protection and at certain riding positions, actually  allows the wind to get under your chin and cause the helmet to sort of pull upwards. What am I going to do? Nothing. It'll be a clean solution to the front number plate and nothing more. Or less.