My trip to Bangalore for a wedding in the family was planned long before what car I would be driving down in was. Various colleagues who had plans in that city also tried at various points to match schedules and make the road trip more, er, populous.

But when I turned the ignition on at 5am and pointed the C-Class' nose towards Bangalore, it was just me and the wife and our startlingly large luggage train.

To the car's credit, it swallowed all three suitcases in the boot leaving the cabin completely free to us. And we made the most of it. Arti took her seat all the way back and stretched out. 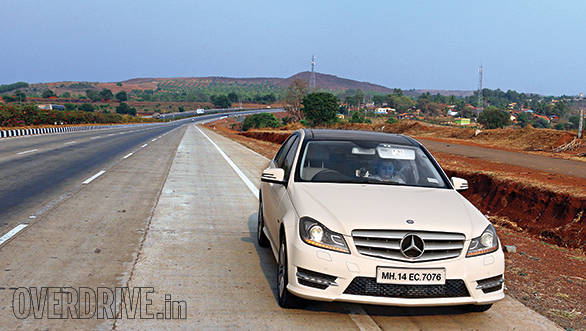 I've done the 1,000km run to Bangalore before and one of the reasons to leave early was the Maharashtra stretch. It's dirty, bumpy and you run from village to village all the way from Pune to Kolhapur which makes leaving later a bit slow. The C-Class manfully grappled with the roads and the speed and I have to give it credit. It absorbed the lumpy road  it's more melted, dented tarmac than broken, really  in its stride.

Then of course you enter Karnataka where the car really comes into its own. The roads are flat, wide, well-surfaced and the traffic seems to just disappear as we soon as cross into the state. As in whoosh! And then you're at the mouth of Bangalore, which is a complete mess. There are stupid toll booths, silly traffic controls, annoyingly slow, meandery traffic... It'll jangle your nerves to have to deal with this idiocy after 10-11 hours on the road. But the C's cabin cossets you rather well. You just turn up the music (track controls could improve) and waft in patiently.

I was actually expecting the car to prove much slower and less interesting to drive than doing that on a bike but I'm surprised at the C. It's such an effective Indian highway car. It wants to do 900km or more on a tankful and can pull blazing quick overtakes if you need to as well. So effective that two days after we arrived we decided to leave for home early. Arti asked me, "Are you sure? It's a whole day at the wheel again for you." And I said, "Yeah no sweat."