A couple of months ago I exchanged my Star City Plus longtermer for the new Yamaha FZ-S to experience a more powerful bike for daily commute. I was quite impressed with this bike in traffic and was quite eager to see what it would be like on the highway. Coincidentally, my wedding anniversary was around the corner - what better way to celebrate than a roadtrip to Goa with the wife.

At first she was a little uncertain at the prospect of such a long ride with ten day's worth of luggage but with a little bit of convincing she was good to go. I borrowed Alan's Cramster saddle bag, used a 75-litre backpack and with some careful planning, we fitted our luggage in. 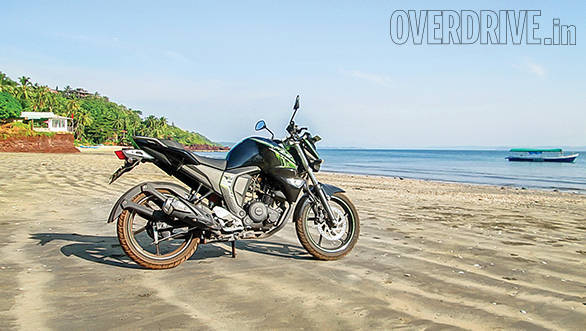 Mumbai to Goa is a 650km ride that I decided to split into three legs to make things easy for my wife. Mumbai to Pune is a quick but fun ride with some winding roads that showed that the FZ was very up to the task of eating the miles but still generating some smiles. The second leg from Pune to Kolhapur was quick and easy on the fast NH4 with some lovely roads after Satara. My pillion rider was quite comfortable with both the seat and the suspension set up. However, the Kolhapur-Goa stretch was a nightmare with terrible roads from Nipani to Amboli. A journey that shouldn't have taken more than five hours took seven. Thankfully, the bike was ready for the challenge and handled all the abuse without complaint.

After a week of exploring Goa we made our return to Mumbai, this time via the scenic Chorla route. It was the same distance but this time we attempted to do it in one day. We left at 6am and were home in Mumbai by 6pm. It was a brisk journey with few stops but both of us and the FZ emerged feeling fresh. This was the longest roadtrip with my wife so far and we can't wait to do more. I already know what my choice of bike is going to be.

More on the Yamaha FZ-S version 2.0 in our garage: