A stern voice comes over the radio, "Easy! We're only halfway through!" It's 4.37am, the sky is dark as ink, the stillness pierced by the sound of tortured tyres screeching across the tarmac, coming onto the main straight. Flying down it, I barely have time to mutter an apology across the radio, before diving on the brakes and pitching the newest C-Class you can buy from Mercedes-Benz into the first corner of the Buddh International Circuit. It's a real exercise in willpower and constraint, and concentration, to not go quick! I'm on my favourite racetrack, in a car with 200-odd horses, filled with the nervous excitement of being on the way to making history. So excited, I've even begun writing this account with it. Yet, I'm being asked to rein those horses in. That takes some effort. But to understand why, we're going to rewind the clock  back to before the start of the OVERDRIVE Mercedes-Benz 24-hours Performance Run. 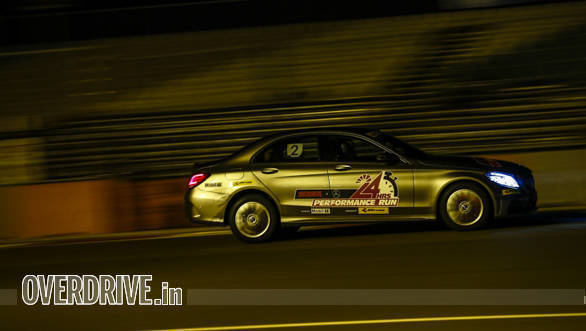 The first challenge was lighting up the track  all 5.1km of it. It's not an overnight task, not by any stretch. Ex-editor of OVERDRIVE, Bertrand D'Souza, and his Speedway team came into play.  With the Herculean effort of making sure the 16 corners of the track were visible and safe to attack at night, we get down to the business of running two cars non-stop for 24 hours. 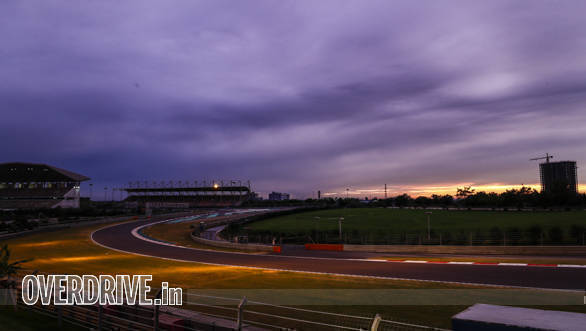 We knew this much  a luxury sedan like the Mercedes-Benz C-Class would be capable of clocking very respectable laps in the mid 2min 50sec range. That gave us a fair idea of how much distance we could cover in 24 hours. What we didn't, was how the extreme weather Delhi has would affect the attempt  with a bearing on everything from lap times, to tyre wear, brake pad wear, overall exhaustion of everyone involved and even the safety of the drivers. While a hot day means accelerated tyre and brake wear and potentially slower times, at least it's a constant. A known. The thunderstorm predicted for the day of the run would be uncharted territory. Heck, just a brief rain shower during our practice runs made for zero visibility, both for the drivers and the track officials monitoring the cameras around the track. Our (only) practice was red-flagged immediately, barely two laps after it began. If it rained during the record attempt, that would be red-flagged too, we were informed by the officials. Not the end of the world, but if everyone involved is already tip-toeing the limits of exhaustion, every extra minute spent awake opens the door for a mistake. And mistakes are the last thing one needs in such a concerted effort. 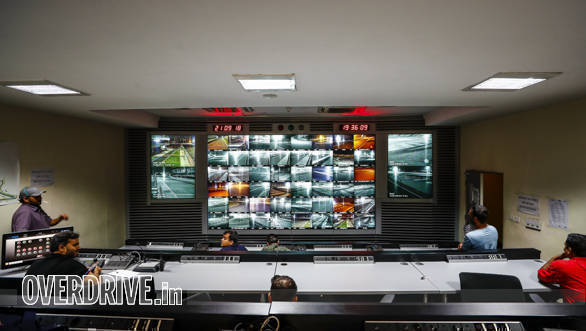 Each of our drivers were scheduled in for one-and-a-half hours of driving at a stretch, with everyone needing to put in two stints, or more. We all had prior experience of the track, except for Rishabh. Bert, and some of the racers, even had experience being part of a 24-hour run before. But no one had ever attempted this long a stretch at a Formula 1 track like the BIC, where the speeds, and forces on the body, are much higher than at any other racetrack.

And for a production car, that too a premium sedan, the C-Class does a mighty job under the demands of the BIC. Both of them do, the C 220 d and the C 300 d. The 2-litre engines in both are differentiated by a tune, and make 194PS and 245PS respectively. Torque is where they shine, 400Nm of it in the C 220 while the C 300 churns out 500Nm. In fact, the engines on both are so responsive and the torque so immediate, that picking the cars up from second in the hairpin (turn three) at BIC, would have the rear wheels chirping on the shift into third. We were driving the cars in Sport, with the cars' safety electronics on and the gearbox set to shift on its own. It was determined that would be the easiest on the cars. 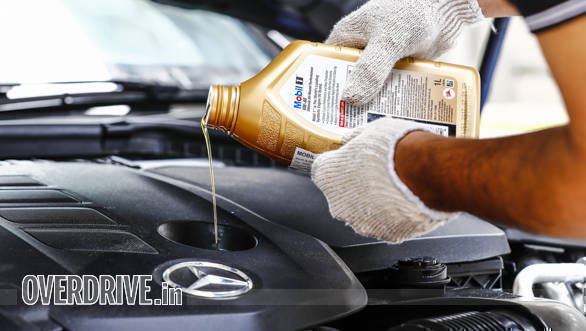 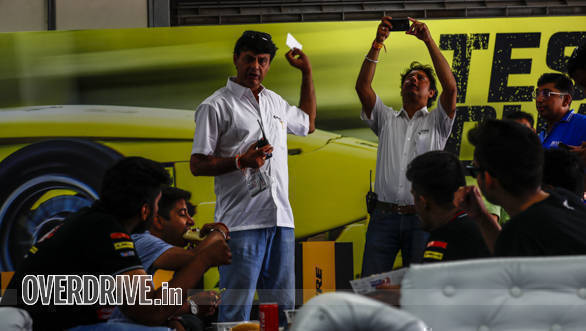 It's the start of the driver's briefing. Sunny Kumar, of JK Tyre Motorsport, is making it clear to the drivers, half of whom are professional racers: This isn't a race. This is a 24-hour test of how far we can take a production luxury car, on commercially available tyres, driving on a world-class racetrack designed for Formula 1 cars. It's a test of how far the pit crews, our production crew, track support and drivers can make it before exhaustion takes over. More than anything, it's a collective statement, a testament to the engineering, performance and durability of the C-Class, the Mobil 1 engine oil and the JK Tyre rubber. And of the entire team. Here's an indication of the scale of what we were going to attempt  700 litres of regular Turbojet diesel on standby, 60 JK Tyre UX1s, and three pit garages full of support crew from Mercedes-Benz and JK Tyre, and 1,440 minutes to get the record.

Abhay and Mira are flagged off. After the buzz surrounding the cars in the pit boxes  getting them stickered, fuelled, tyred, photographed and filmed  there's almost a sense of unease now that they're out on track. No one quite knows what to do for a few minutes, except wait for the screens to flash with news of the lap times of the two cars as they cross the start/finish line. Soon, the pit crew sneaks off to rest before they're called on again. Our camera crew run to hitch a ride to a good vantage point around the track. The times are along the lines of what we expected  slowly getting better as Abhay and Mira both open up the cars a little more, exploring just how far is far enough. Nine laps in, Abhay sets a 2min 50sec flat. At this point, there's only a few drivers watching the timing screen. Even though it was made clear it's not a race, we all know a quick lap time is the pole we must vault over. 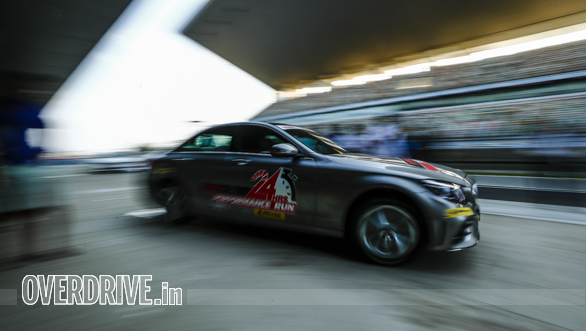 Mira comes in for the first live pit stop. It's been decided to have the car drive into the pit box, where it's easier to access tools. These might be Formula pits, but the pneumatic wheel gun we have, has a cord that only stretches so far. It's also been decided to change only the front tyres after 25 hard laps. Think that's a short distance? At the same championships that run at BIC, the cars get fresh tyres all around every race. The races are usually 10 laps. The BIC is hard on tyres, especially the front left ones. Abhay pits a short while later, and it's now Raghav and Anmol out on track. 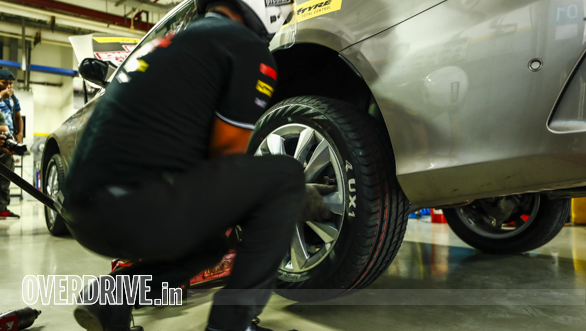 It seems both drivers have it figured out  push for a lap, set a time and then back off before someone gets on the radio yelling. The team effort is for consistency, yes. But the racers can't help but push for a good timing too. Times drop below the 2m 50sec mark for both cars. 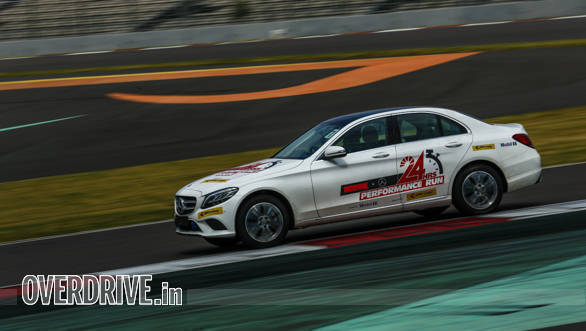 We cross the 100 lap mark and the cars makes a pit stop. This is the BIG stop  the crucial one. All four tyres, brake pads at all four corners. The JK Tyre team is handling refueling, which leaves the Mercedes-Benz crew to loosen lug nuts, inspect the pads, pry the calipers off, slide in new pads, and redo everything they just undid. The first BIG pit takes less time than expected, under 13 minutes. It's also properly dark now, drivers relying on the track lighting and excellent LED lighting of the Mercs to do the job. We thought lap times would increase with decreased visibility. That's not so. The track surface is cooler, cars are running cooler and we start seeing glowing red discs between the spokes of the wheels. There's nothing cooler than that! We realise we can't see the glowing rotors of the C300, since its brakes are ventilated and appear to be very efficient at cooling themselves. 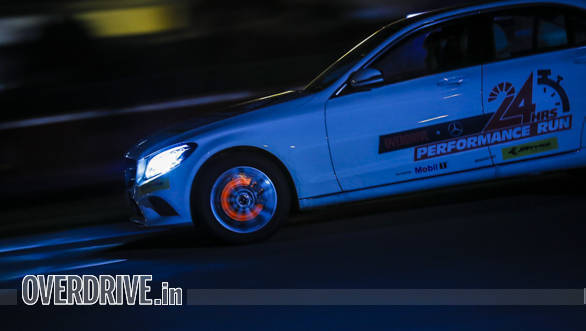 It's past midnight. No one seems to be awfully sleepy, though I do come across a couple of slumped over, head-on-chest figures in the lounge area. They don't stay that way very long. Saran sets the session's quickest lap time, a full second quicker than the previous benchmark lap by Diljith. He pits a few laps later and is presumably given an earful, but the lap time sticks. Sarosh comes in a little earlier than expected, since his dinner was too close to his driving stint, and as a result didn't quite want to stay down. 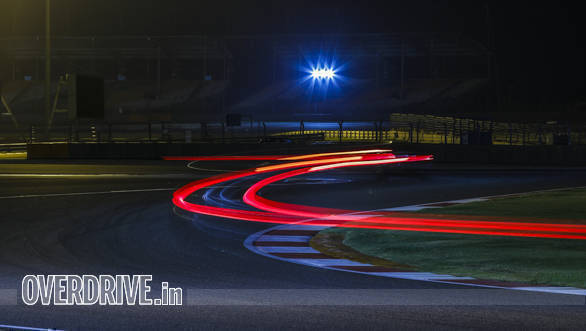 Shortly after, Rohit goes and sets the quickest lap time of the session in the other C-Class! The two cars are running the best we've ever seen and at some point are even trading places on track. Everyone wanted to avoid that, since it usually leads to both cars pushing too hard.

My alarm brings the first real sleep I've had in a few days to an end  it feels like it rang about 20 hours too soon. That feeling doesn't last long, it's almost immediately overtaken by that same nervous excitement, at its peak. It's finally time for my stint behind the wheel. There's some concern in the pits over conserving the brakes on the car. I would need to nurse the brakes till the next BIG stop in an hour and a half. No pressure, then. 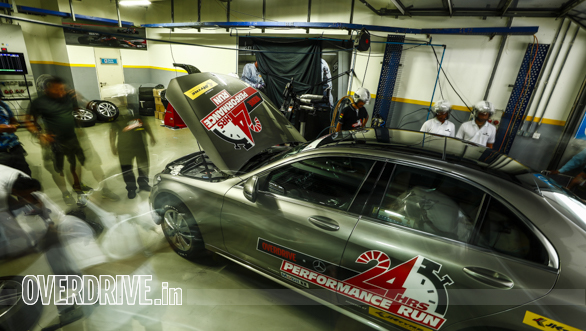 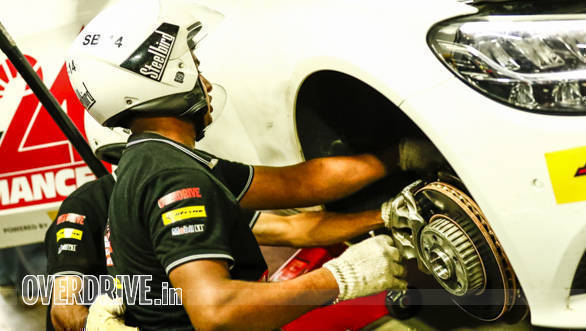 The car is so easy to work into a rhythm, it's easy to get carried away every now and then. I haven't paired my phone audio, nor is there anything playing on the radio. To keep myself entertained, I experiment with lines and braking. The electronics let you be a total hooligan, and bring you back in line without drama. There's so much torque, I find I need to feather the throttle to get the best results. I am still taking it easy on the brakes, so laps feel smooth, if unremarkable. Time sheets show smooth really is fast.

With the sun up, so are most of the people on track. Running on sleep varying from little to none at all, yet everyone's still driven by the singular goal. We're well on the way to exceeding our original estimate! 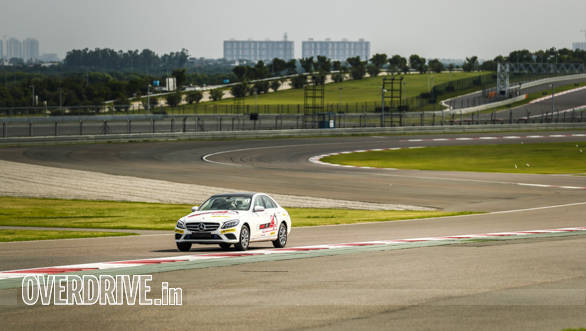 A bird takes Mira by surprise. Or maybe it was the other way around. No damage to the car, luckily, but subsequent drivers are advised to use the horn if more wildlife appears. 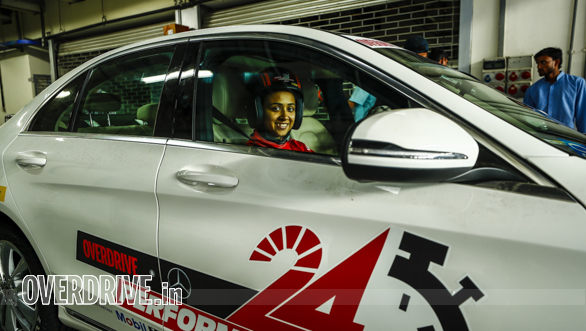 Over 1,800km later, the car was brought in for its last BIG pit stop, but it's taking time. The pads can't be changed since the pistons in the brake calipers are refusing to budge. The brakes need to be cooled and there's nothing we can do but wait.

After a series of consistent laps, Abhay is ready to bring it home in style. It seems like the number of people has grown tenfold, and all of them are gathered at the end of the pit lane, waiting to get the money shot of the waving chequered flag. 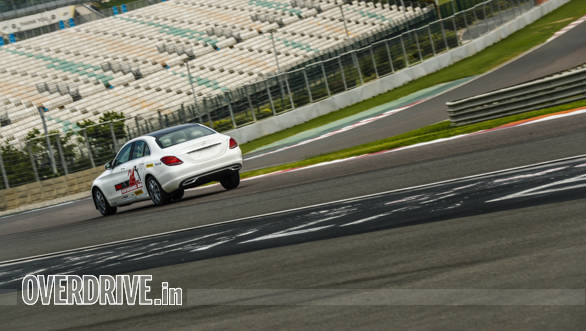 As that flag comes down, the Mercedes duo cross the finish line for the last time. Despite borderline exhaustion, everyone involved looks like they've just returned from vacation! It's a new record after all, one set at a racetrack ideal for setting record lap times, not record distances. Thinking of the scale of the effort involved, it's fitting that OVERDRIVE and the Mercedes-Benz C-Class now hold the national record  2,200km clocked in 24 hours at a Formula 1 track. 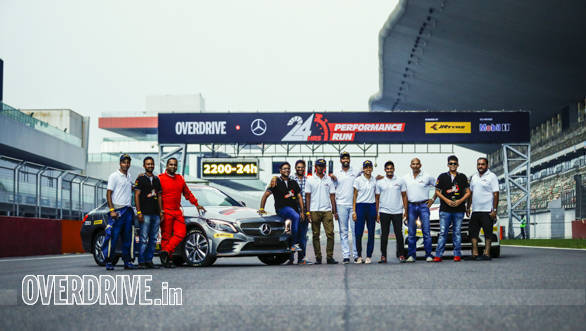