There's an image of Paulo Goncalves that's etched in my mind. He's racing through the dunes during the seventh stage of the 2020 Dakar Rally, one wheel of his Hero MotoSports Team Rally RR450 is in the air, wisps of sand swirling around as he rides straight into the sunny horizon. 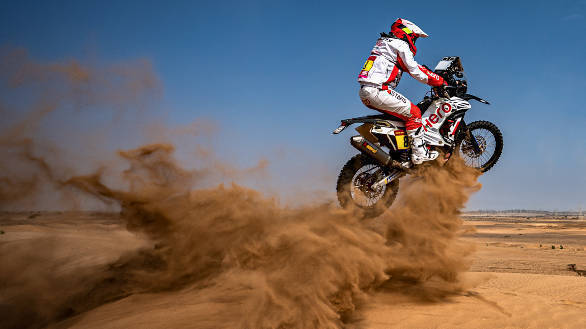 Paulo Goncalves leaping through the sands at the 2020 Dakar Rally

It's the photographic equivalent of poetry. A motorsport haiku, if there ever was one. An image that is the very embodiment of everything that the Dakar Rally represents, skilfully frozen in time by photographer Florent Gooden (Google the image, you won't be sorry). And it's an image that is made all the more significant by the fact that it's one of the very last ones of "Speedy" Goncalves in his element - riding a motorcycle as fast as he possibly could across some seemingly impossible terrain.

A few hours after that image was taken, the 2020 Dakar Rally would reach its point of no return in more ways than one.

Paulo was courage, perseverance, tenacity. That was Paulo. That was the Paulo I want to remember. - David Castera, Race Director, Dakar 2020

January 7, 2020. Somewhere in the arid landscape of Neom, Paulo Goncalves sits all alone, his Hero MotoSports RR450 next to him. He's just 30km into the third stage of the 2020 Dakar, and the engine on his motorcycle has given up. But Goncalves hasn't. He waits patiently for five and a half hours, watching as fellow competitors go whizzing by, as do his hopes of fighting for a top position at the rally. Over the course of the first two stages, Goncalves has managed to take two 12th place finishes, leading him to an overall rank of 14th. The engine issues on the third stage have thrown a spanner in the works, certainly, but haven't dented his spirit. When the No.536 truck of Antonio Cabini finally trundles into view, Goncalves leaps into action. Cabini's crew has brought with them the spare engine that Goncalves needs in order to get his motorcycle going once again. He works steadily on, replacing the engine, repairing the bike, and sets off on his quest to make it to the end of the stage. But 40km later he needs to stop and carry out further repairs to fix the fuel pipes that he hasn't managed to connect properly. When he finally gets going again, the tracks have been completely destroyed, because the cars and trucks have already gone by. Goncalves has only his roadbook, his dauntlessness, and a steely resolve to help him make it to the end of the stage - that "courage, perseverance and tenacity," that Castera will later speak of. He rides most of the way in the dark, and arrives at the bivouac a full six and a half hours after stage winner Ricky Brabec. He might only be classified 127th in the stage, and he might have slipped down the order to 111th overall, but he's somehow still in the race - something that had seemed rather unlikely just a few hours earlier. And he's as chipper as one can be after having survived such an ordeal. "The important thing is that we never give up, and here we are to keep on race. The target now is to do our best everyday, to be safe until the end," he says. 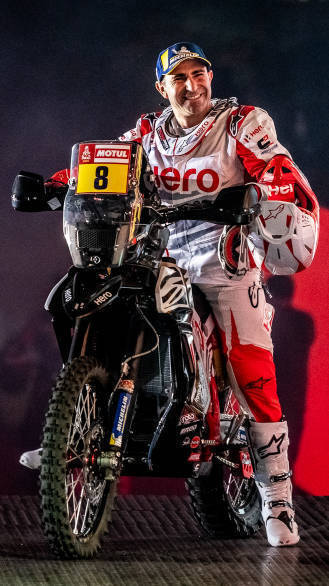 Goncalves seen here on the podium at the start of the Dakar in Jeddah, Saudi Arabia

After a few hours of rest, Goncalves is back on his motorcycle, and as determined as ever. If giving up hadn't been an option during the nightmarish third stage of the rally, he certainly isn't going to take things easy during Stage 4, so the world is expecting a fighter's performance from him. But his results at the end of the fourth stage go far beyond that. They're astounding. The Portuguese rider has managed to power through to fifth place in the stage, eventually being elevated to fourth after KTM rider Sam Sunderland is given a penalty for speeding. Goncalves has made his intentions clear. Irrespective of where he might be ranked overall, he's not in the Dakar to merely ride to the end of each stage. Instead, he's in the Dakar to fight for top stage positions. It's an attitude that pays off, and sees him climb to 83rd overall. A 10th place finish in Stage 5 moves him up to 59th overall. And an eighth place finish in Stage 6 takes him to 46th overall. Tragically, Paulo doesn't get a chance to climb any further up the order.

I remember him stopping for me in 2017, when I broke my leg in Dakar. It was the right thing to do (to stop) for him. And we helped get him in the helicopter, at least I knew I was there for him. And tried to comfort him as much as possible. - Toby Price, two-time Dakar winner

After a well-deserved rest day that followed the sixth stage of the rally, the riders are ready for a somewhat long seventh stage that will take them from Riyadh to Wadi Al-Dawasir, with a liaison distance of 195km, and special of 546km. It feels like the rally has barely resumed when the worst happens. At 10:08, the ASO receives an alert that something is amiss at the 273km mark. Eight minutes later, the rescue helicopter lands at the site. Goncalves has crashed. KTM riders Toby Price and Stefan Svitko are already there, having stopped in the hopes of helping their fellow competitor and old friend. But it's already too late. Attempts to resuscitate Goncalves fail, and he's airlifted to a hospital in Layla where his death is confirmed. And just like that things change - a dark cloud descends upon the Dakar. 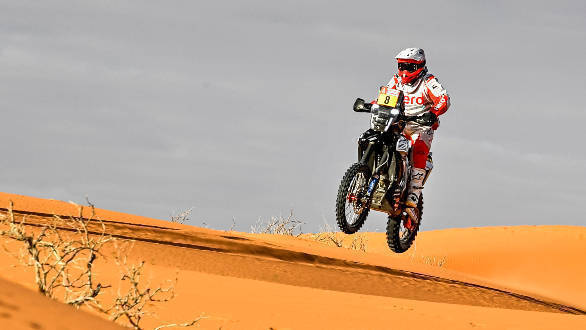 Goncalves is the first competitor to have died at the rally since Polish rider Michal Hernik in 2015. With 13 Dakar starts to his name, to say that Speedy is a beloved member of the Dakar family is putting things mildly. He is an iconic rider. A rider who has accomplished so much over the course of his career, whether it's the World Cross-Country Rallies Championship title (2013), a second-place finish at the Dakar (2015), or three Dakar stage wins (2011, 2015, 2016). But more than that, he is a rider who people remember as kind, helpful, brave and inspiring all at once. Price confesses to having ridden the rest of the stage dehydrated from crying. For the remainder of the rally, he says he is "#RacingForSpeedy". Kevin Benavides, who is 70km away from winning the seventh stage, dissolves into tears at the refuelling point when he realises that Goncalves, his former teammate at Honda, has passed. Laia Sanz describes Stage 7 as "the worst stage of my life." Xavier de Soultrait, of Yamaha, recalls a time when despite being from rival teams, him and Goncalves rode together, helping each other after having been lost in the desert for a while. The grief of the competitors can be sensed from the video footage of the day. There are riders in the bivouac struggling to keep it together when they're informed of the news. Faces in the bivouac at Wadi Al-Dawasir are drawn and tear-streaked. And after observing a minute's silence, it is announced that the eighth stage of the rally will be cancelled for motorcycles and quads out of respect for Paulo. And also to help the competitors to cope with the passing of their friend.

Unfortunately, another member of the bikes family has left us, and every time it's the same question. Is it worth competing? What's the point of it all? We always ask ourselves the same question. What are we doing here? - Stephane "Mr. Dakar" Peterhansel, 13-time Dakar winner 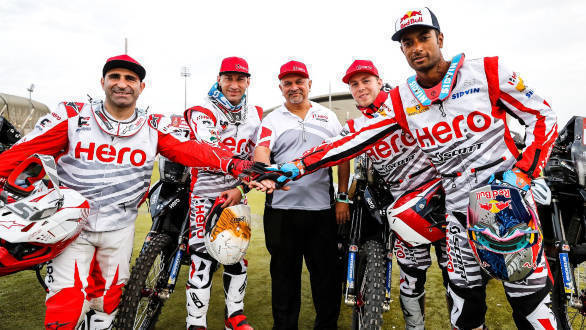 All for one and one for all - the Hero MotoSports Team Rally riders seen here before the rally. From left: Paulo Goncalves, Joaquim 'JRod' Rodrigues, Sebastien Bühler, CS Santosh

Of the Hero MotoSports Team Rally's remaining riders, only CS Santosh is still in contention for an overall finish at the event. After seven stages of the rally, Santosh is ranked 35th overall. He's had his ups and downs over the course of the event. An injured hand after a couple of crashes on the first stage has hampered his progress, but he's managed to rise through the order steadily, finishing as high as 31st during the rally's sixth stage. Joaquim "JRod" Rodrigues, hasn't been in contention since the rally's first stage, when technical issues forced him into the Dakar Experience category. JRod, who also happens to be Goncalves' brother-in-law, is naturally devastated by the turn of events. Sebastian Bühler, the team's latest recruit who was drafted into service to replace the injured Oriol Mena, is also running in the Dakar Experience category, after his rapid progress through the order is stymied by a mechanical issue on the sixth stage. Given the circumstances, it's no wonder, then, that the team decides to withdraw from the rally. They issue a brief, dignified, statement. It consists of three simple lines: "The entire Hero MotoSports Team is in deep mourning after the tragic demise of our rider Paulo Goncalves on Sunday. With immense respect for our departed teammate, Hero MotoSports will not continue its participation at the Dakar Rally 2020. The other riders, along with the team management and support staff, will join the grieving family of Paulo."

When these things happen, a little part of you dies too. Call it transferred hope. My friend Alan Henry refers to such events as the days the circus leaves town, when you learn the hard way that motor racing can indeed be a cruel sport. Somewhere inside you a light dims, something is torn loose. - From David Tremayne's "The Lost Generation"

"Motorsport is dangerous". We see it tacked onto the back of motorsport tickets, motorsport passes, and even on signboards at racetracks. But most of the time we're fortunate that these three words remain somewhat abstract. When we do think of the dangers of the sport as less abstract, we think of injuries. Usually injuries that prove to be minor setbacks, and not insurmountable obstacles. Even within the context of the Hero team, we think of CS Santosh with a blood-streaked face and a swollen lip after crashing on Stage 10 of Dakar 2018 in Argentina, but still managing to get back onto his bike and make it to the end of the stage, and then the end of the rally. Or CS Santosh crashing out of the Dakar in 2019, but recovering to ride at the event a year later. Or we think of JRod leaping over a sand dune and crashing during the Dakar's first stage in Pisco in 2018, but, after corrective surgeries to his back, recovering well enough to be competitive this year. We begin to think that the worst that can happen to these heroes is pauses and commas, not endings or full-stops. But every once in a while there comes a harsh reminder of their mortality. The sort that came along on the 2020 Dakar's seventh stage.

Which brings me back to that photograph of Paulo that I have etched in my mind. An image in which nothing is static. Not the shifting sands of the desert, not the motorcycle, and certainly not Goncalves himself. Instead everything is in motion, and everything is energetic. Much like Speedy Goncalves was. And possibly exactly the way he'd like to be remembered.