Now, this is my kind of party! It's Volkswagen's Motorsport India's 10th year of racing, and they have every racecar they've ever built lined up for us to sample, at the MMRT in Chennai. Some are old favourites, like the hyper Polo Cup car. Others, are so fresh from the factory, we're not allowed to lay our grubby hands on them, like the nutty mid-engined, rear-wheel drive Polo RX. Which is as good a place as any to introduce VW's motorsport division. 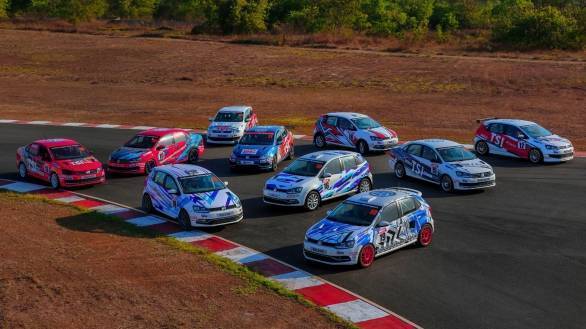 Of course, it all began with the 'volks wagen' itself. The people's car. The Beetle. 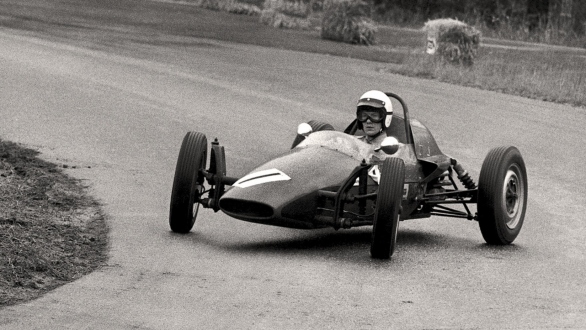 It didn't just mobilise millions over the 80 years it's been in production, the Beetle also gave birth to Volkswagen's motorsport division! As the story goes, an open-wheel racecar, made using parts from the rer-engined, rear-wheel drive Beetle, got so popular in the US in the early 60s, that VW engineers just had to take a few back to Europe to study. The Formula Vee series helped more than a handful of drivers cut their teeth on circuit racing, with its affordable cost-of-entry and running. You may recognise their names  Niki Lauda, Keke Rosberg and Emerson Fittipaldi, amongst others. 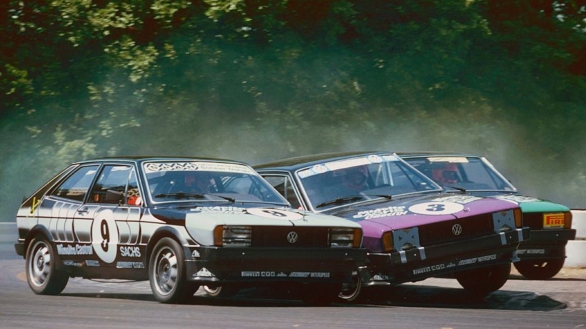 It wasn't long after, that VW opened the VW Junior Cup to drivers in Europe, with the same fundamentals. A grid filled with affordable production cars (the Scirocco, in this case) lightly modified to the same level from the factory, to provide an even playing field where driver skill could shine through, and the car's capabilities. It's a formula that's so sensible, it's remained the basis for grassroots motorsports across the world.

It was quite the statement, when VW introduced their first small car for India, the Polo, in 2010, they immediately sent it racing! Enter the Polo Cup one-make championship. With cars developed in Germany and built at the VW Motorsport factory in Chakan, it was the first time a saloon racing championship was using cars that were built at the same factory, and the first time a racecar in India would be tanked up with diesel. 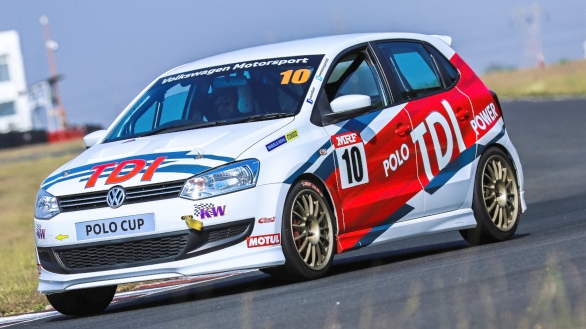 The 1.6-litre Polos were still a force to be reckoned with, what with their functional aero, Sachs race suspension, race brakes and most importantly, data logging system. For rookies and experienced drivers alike, being able to tell exactly what they were doing in the car, and at what point on the track was a learning tool that hadn't been available in saloon cars, ever! It probably took touring cars in India forward too, since JK Tyre developed 17-inch race slicks for the Polos, which the Indian Touring Cars then switched to later. The Polo Cup truly was a world-class racing experience. And at about Rs 2.5 lakh for a season of racing, plus the chance to race abroad, it was great exposure for not great amounts of money.

Driving it again, some three years since I first sat in one, the diesel Race Polo still gives me jitters, and it's not from sounding like a cement grinder. It's the only one of VW Motorsport's racecars to not have ABS. A fact I'm rudely reminded of, when a quick tap of brakes to set up the car into a corner, instead sent the rear end sideways! What a lively little car this is around corners! It does feel almost painfully underpowered on the straights though, and the low revving diesel doesn't help mid-corner.

Obviously then, for the next iteration a few years later, VW Motorsport turned the pace up, to something closer to international standards of touring cars. Under the hood of the Polo R Cup car, it was essentially the last-gen Polo GTI with 180PS. A respectable number for everyone from rookies to pros. Though, in the interest of making it easier to drive at the limit, a bit of the sharpness of the Polo was dialed out with the addition of a wing for more stability, apart from other geometry changes. The goal was lap times. 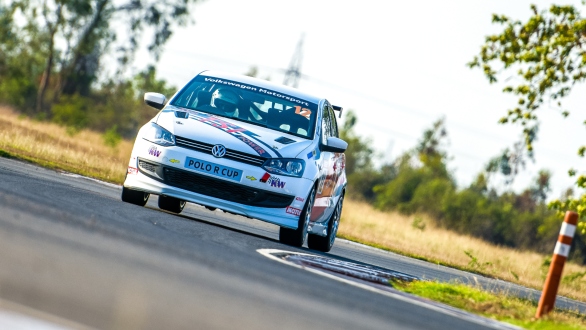 And, boy, does this car make chasing a lap easier. So simple, you can leave the DSG gearbox in its Sport mode and let it do all the work for you! It does a good job, too. On just two short laps, I was able to clean up my entry into the long right at MMRT. Just because I wasn't thinking about which gear I needed to be in, and could use that mind space instead to focus on getting the lines perfect. And that line of thought is something VW Motorsport explored further with the Vento Cup car.

Sirish Vissa, head of VW Motorsport, says that the choice was led by marketing, since the Vento was the newer model in the VW India lineup. But it also gave the race engineers a better base to address some of the issues with the Polo, namely its twitchiness. Because with the longer wheelbase of the Vento, welded in rollcage for the first time and KW suspension, came greater stability and rigidity. 2016 is also when the championship shifted to MRF as their tyre supplier, and that further saw lap times cut down by a second or two, though the powertrain remained the same. 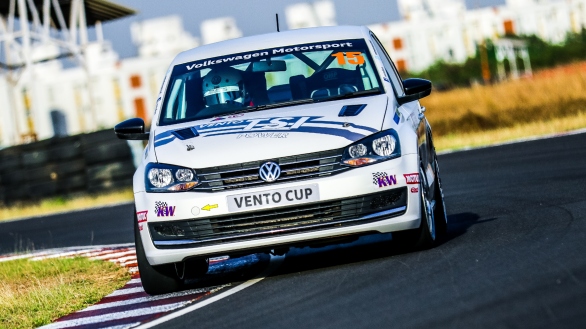 It's immediately apparent in the fast chicanes between corners three and four at MMRT. This is where the fastest line is to stay flat out, through the quick direction changes, and over the kerbs. It's also where you're pulling the highest cornering g-forces. In the Polo I'd just stepped out of, it felt like a rollercoaster on the verge of flying off its tracks. In the Race Vento, it feels like the track had just grown a few feet in width  you don't even feel the kerbs! This is good, since it gives you the confidence to push harder. But at the same time, some of the raw appeal of an on-the-edge racecar had gone.

So, when the typical two-year life cycle of the Vento was drawing to a close, the natural successor was the newly launched, and made-for-India Ameo. With it, VW Motorsport moved back to a short wheelbase setup, but the stubby boot gave them the perfect mounting point for a huge rear wing. The Race Ameo also switched to an upgraded powertrain, the 1.8-litre turbo from the current-gen Polo GTI, mated to a race spec sequential gearbox with paddle-shifters. 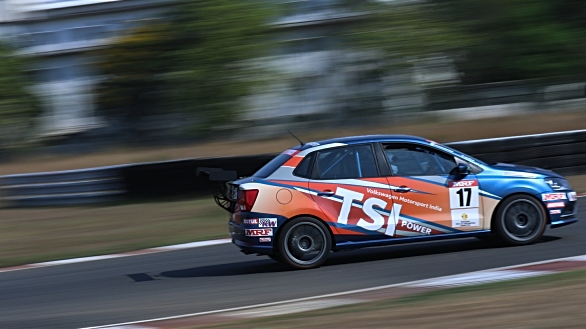 Out on track, you can tell how far VW Motorsport have come with the setup of the Race Ameo. It turns in on a dime, much quicker than the Vento, and shows far less understeer. It also stays better balanced under braking than the Polo ever did, and you can really attack a corner, with the nose pitched right in. In the Ameo, it also becomes apparent just how much work the limited slip differential is doing to help the front end tuck into the corner, when the power is put down. While the Polo and Vento would both wash a little wide if you weren't careful with the throttle, in the Ameo you can very quickly go to full throttle and trust that the car will stay true to its line. It's amazing really, that it can be so quick and yet be rookie-friendly. I've been told it's set a 1 min 51 sec lap in the hands of Karthik Tharani, resident tester, which is a good way quicker than the ITC cars, thus-far the quickest saloon cars around MMRT.

Speaking of, VW Motorsport has also reignited a few flames from their Customer Sport initiative which was set up in 2014 to deliver ready-to-race cars for both rally and tarmac use. One of those projects was a Vento ITC car, which gave the Esteems and Citys a challenge but ultimately couldn't compete with the rulebook stacked against it. But with the new TC4A regulations allowing forced induction, the Vento ITC has a chance. With the same powertrain as the Ameo, the ITC car has to breathe a little shallower thanks to a restrictor plate fitted. But the higher class of racing means more experienced drivers, and a more hardcore setup to go with it. So, while it may look like a Race Vento from a few years prior, it drives nothing like one. 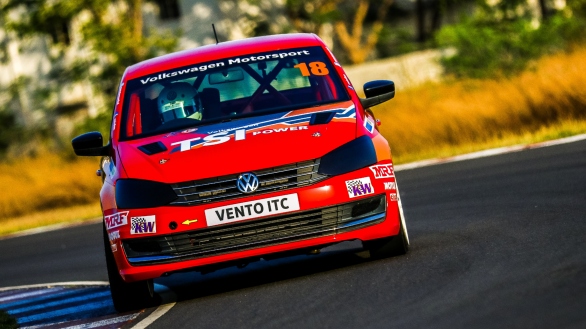 In fact, it's much harder edged, and more ready to snap at you than even the diesel Polo was. And the Vento was supposed to be the stable one! But it really does drive home the point of just how far chassis development can change the character of a car. In fact, with the Vento ITC, VW Motorsport has moved development along a whole new parallel. Wheels India has helped develop new forged wheels, which are up to 3kg lighter than the wheels used previously. And 3kg of unsprung weight saving is closer to 21kg saved  at each corner! So, with a much more reactive car, and aggressive settings, VW Motorsport looks set to cause upset in the ITC class. 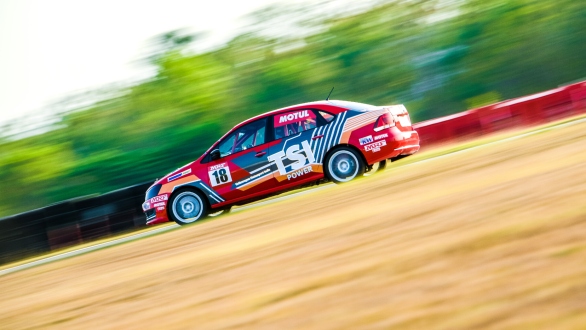 Further, the winning driver from this year's Ameo Cup gets a seat in the next level of hardcore tin-top, the ITC, before having to make the jump to single seaters. And the best part for the drivers, which we've just learned, is that now the Ameo Cup is a part of the National Championship, meaning VW Motorsport is going to continue to produce more and more champions for Indian motorsport. Champions who then are set to go abroad and race carrying the Indian flag. If that isn't a great going-home gift from a party, I don't know what is.

Back to the roots

Rear-wheel drive VW with the engine in the back remind you of the Beetle? The Polo RX 'winter project' was built to please the most hardcore of track junkies, with its 45/55 (F/R) weight balance and 205PS of power. It's a recipe for smokey drifts, and VW Motorsport says they can build one with up to 350PS if you want. 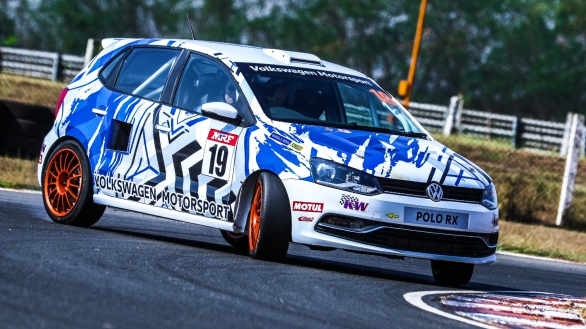