Today there are as many dieselheads in the country as petrolheads. In terms of performance, the oil burners are as quick and sometimes quicker than their petrol counterparts. The Dzire diesel for instance, is as quick as the Dzire petrol/Swift petrol. However, for those looking to extract even more performance and fuel efficiency from your diesel car, its time to rejoice. Bangalore based ECU specialists, Race Dynamics are offering their new range of diesel performance ECUs, Dieseltronic (diesel performance box) for most common rail diesel engines. We got our hands on one and tried it on our long term Dzire. 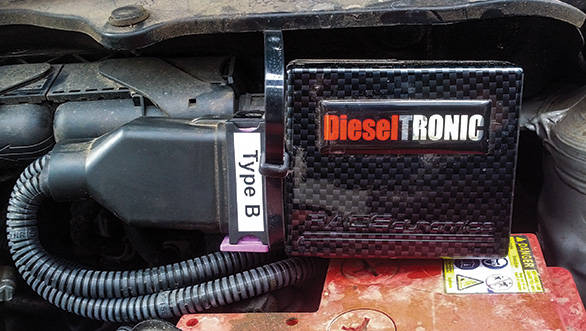 The installation was done by the Mumbai dealer and it took just 10 minutes, since it's an easy plug-in method and requires no extra wiring. The highlight of the system is the option to choose from four different maps  stock, economy, P1 and P2. The modes can be easily changed on the fly using a small remote control. The stock mode is same as the car's original ECU map. The E mode is mapped to increase fuel efficiency by a claimed 40 per cent and give the car more linear power delivery with reduced turbo spike. On the road, we felt a noticeable power drop and even more turbo lag, but it felt sufficient especially in the city and at cruising speeds on the highway. The Dzire went on to return 16.58 kmpl and 24.74kmpl in the city and highway respectively (an increase of 1.28 and 0.85kmpl over the stock figures). In terms of performance, the car takes 16.1 seconds to hit the ton (two seconds less than as stock). Roll-on figures have considerably changed, 20-80kmph in third gear now takes 23.24 seconds (stock - 14.13s) while 40-100kmph in fourth and fifth gear takes 23.21 and 32.36 seconds respectively (stock -13.37s, 20.7s).

P2 mode of course is our favourite mode, since it claims to increase power and torque by 40 per cent. The numbers? It takes just 12.35 seconds to hit the ton (quicker by a 1.81 seconds) while roll-on figures improve considerably. 20-80kmph in third gear shaves off 3.05 seconds while 40-100kmph in fourth and fifth gear is lesser by 1.63 and 1.47 seconds. Turbo lag is minimum and power delivery is much stronger. Top-end performance has also improved; the car now effortlessly reaches 160kmph. We were curious to check the fuel efficiency in this mode, and came back quite surprised. With much improved performance, the car still returned 14.2 kmpl in the city and 22.14 kmpl on the highway, less by just 1.1kmpl and 1.75kmpl than the car's stock figure. The Dieseltronic ECU gives you the option to drive four different cars at the press of a button, and for Rs 19,999, is good value too. Keep in mind however, that it will void your car's warranty.