When you buy a motorcycle, you're acquiring one of two choices, either a commute or a lifestyle. There exists a substantial division between those two aspects. Very, very few motorcycles manage to straddle that gap and I've recently figured out that the Royal Enfield Interceptor is one of that rare breed. It is a huge step forward for the company, both in terms of positioning and the company's engineering capabilities. And over the next few months, I'm eager to explore and narrate to you what I mean by this motorcycle straddling both ends of the motorcycling market. I've been riding the Interceptor for a little over a month now. It's a short commute, no longer than six kilometres one way. Yet having ridden this distance several times now, has given me some insight into the Interceptor. 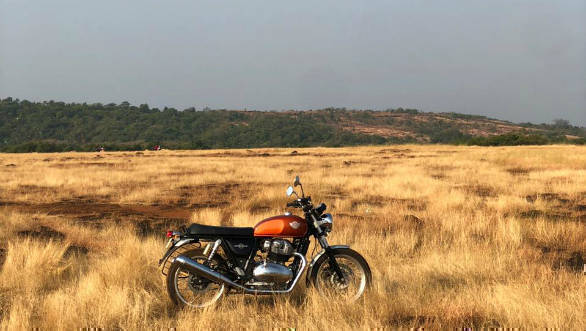 And the first of that is the engine, with some sweet oratory skills! My commute allows me to open up the throttle on the Interceptor in a few sections, easily raking up triple digits on the speedo. And I love twisting that throttle up from 3,000rpm onwards where the engine note changes from a slightly lazy drawl to a more urgent one. Then switch off again and whip it up again. I could do that all day long and it suits middle-aged me nicely. It is even sweeter when you the blip the throttle on the downshift, and let me not forget the traffic lights. The Interceptor 650 draws glances from young women sunk deep into their auto rickshaws. It gets raised thumbs and noses, from enthusiastic Pulsar speeders and elitist Standard Deluxe crawlers respectively. It has even made older men put their cell phones down, shrug the germ of male menopause off their shoulder and glance wistfully at the Interceptor!

So I'd say the first month has had more to do with the Interceptor's image than anything else. It attracts attention, first from that engine note and then from the Royal Enfield badge on something that's not traditionally a Royal Enfield. And that has essentially been what my long-termer experience has been about this month, an expression of delight, curiosity and wonder. There's more to narrate and further updates will keep you abreast of the developments of this motorcycle.

A long highway ride to assess its long ride credentials