Remember your toy car collection? The axle, in its simplest form, is the thin metal rod that connects the left side wheels to the corresponding wheels on the other side. Technically, the axle is a strong metal shaft around which a wheel rotates. In the sense of four-wheelers, the axle is a shaft that connects two rotating wheels. It's very common and is used in practically every application where a wheel is involved.

Two-wheelers have the simplest axles. It's the rod that the puncture guy extracts before he can remove the wheel from the bike. This rod doesn't rotate with the wheel. Bearings on the axle allow smooth and friction-free rotation. On higher performance machines, you'll find a large diameter tube instead of a rod axle. This saves weight, allows great rigidity and the hollow is useful in mounting the bike for transport. 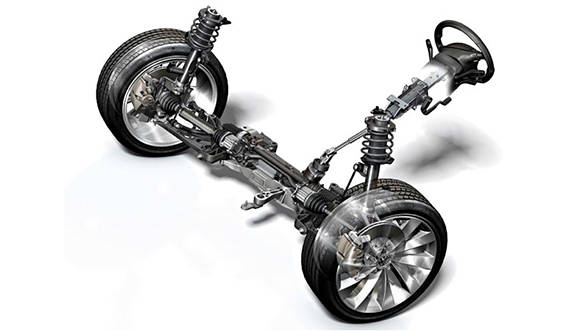 Four-wheeler axles are more complex and diversified. In essence there are two functional types. Driven axles connect to wheels that are rotated by the engine's torque. Dead axles carry loads and the wheels can be slowed down by the brakes but they do not receive torque and cannot directly be accelerated. Think of the rear axle of a front-wheel drive car as a dead axle. Or every single wheel set on the bogeys of a train.

On train coaches (as well as heavy trucks and trailers), a highly rigid axle shaft is employed for the load. The strength of the shaft lends itself to doubling as a suspension mount and adding a load carrying function as well. Heavy trucks often employ multiple sets of axles and wheels to spread the load on more tyres. Hence the term 'multi-axle vehicle'.

The issue with rigid axles is that when the vehicle stops travelling in a straight line, it continues to force both wheels to rotate at the same speed. Whereas taking a turn requires the outer wheel to rotate faster than the inner wheel.

Enter the split axle. This is a design where each wheel gets its own axle and can rotate independently of the other. Usually a differential is used to connect this wheel set to permit the difference in wheel speed. This is how most passenger car wheel sets are constructed. Split axles tend not to be connected to the suspension system and aren't load carrying. But the split design makes it easy to employ independent suspension though dependent suspension setups also use split axles.

A driven axle - where the engine's torque controls the rate of wheel rotation - can be straight or split. Straight driven axles are commonly found in train locomotives where the wheels don't turn.

Cars use split driven axles in many configurations. Rear-wheel drive cars connect the engine via a drive shaft to split drive axles via a differential. Front-wheel drives deploy the engine, gearbox and split driven axles as a combined unit called a transaxle. This is a very efficient setup and that's why it's becoming the default way to design small cars and increasingly, SUVs.

In a four-wheel drive setup, the engine's torque is split by a central differential or equivalent unit and then again by differentials at each axle. Off-roaders will typically also feature an enclosed or protected axle design to prevent damage.

Can you have vehicles with no axles at all? Yes you can. If you can take the power source and connect it directly to the wheel, then you don't need an axle. This is not a very common way to construct vehicles right now but that is slowly changing. Many electric and hybrid vehicles are now placing electric drive motor-generators in the wheel. This setup is electronically controlled by inputs from the driver. The motor-generator's torque can be used at primary drive or as supplementary drive for economy or performance applications.