The first brakes - still popular in low cost applications - were drum brakes. The name comes from the actual construction of this kind of brake. Usually mounted on the wheel axle, the external form of this brake is of a cylindrical drum. Larger radii are used to extend the surface used for braking - usually the inner circumferential surface of the cylinder. Inside the drum are a pair of semi circular brake pads made of high friction and high wear resistance materials. The brake pads are semi-circular and are mounted on a metal shoe and together the unit is called a brake shoe. The shoes are mounted so the drum rotates freely but the pad surface is very close to the drum.

When you press the brake lever or pedal, these shoes are pressed forcefully outward into the cylinder which is rotating along with the axle. The friction heats up the drum and also causes the vehicle to slow down. When you release the lever or pedal, a set of springs return the shoes to their natural position close to but not in contact with the drum.

The first problem with drums is that they are, by nature, heavy and that is inefficient. Second, drums have trouble dissipating heat and the shoes, which live in a hot, closed cylinder can overheat causing a loss of friction which makes the brakes less effective. This loss of braking ability under duress is called brake fade. If you look at early race bikes, you will see forward pointing mesh covered vents on drum brakes which were one solution to try and cool the brakes and stave off fade. As you know, drum brakes also suffer when they get wet and drivers and riders alike have to manually dry them with partial use before full braking can be accessed again after crossing deep water.

The fade issue was solved by the arrival of disc brakes, first seen in the 1953 Jaguar Le Mans racecar. Here the principle is the same but instead of a drum, a disc is used as the brake surface while the brake pads are pressed into the disc surface to create friction. The mechanism that presses the pad to the rotor or disc is called a calliper. Today's calliper unit can have more than one piston to press one or more pads into the disc. The piston, usually at the one end of a hydraulic system, is pushed outwards with force when you operate the lever. Disc pads don't have a spring return mechanism though and they stay in contact lightly with the disc rotor. 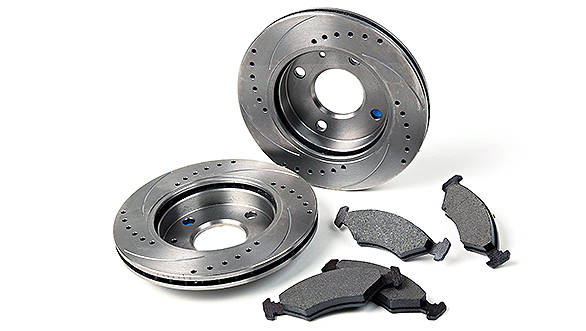 Because the rotor is exposed to the atmosphere and has such a large surface area despite a relatively small mass, the disc brake resists fade very well. Higher performance discs aid the ventilation further by either using a wavy outer circumference design or drilling the disc for greater surface area. Car discs which stop bigger loads and can be heavier can also have the two brake surfaces (each side of the rotor) separated by a ventilation channel - hence the term ventilated disc. Another term, floating disc, is usually found in motorcycle jargon. It refers to disc brakes where the brake surface, usually iron or steel, is mounted to a rotor carrier of a different material. To account for the different coefficients of expansion (metals expand when heated), the rotor and carrier connect via rivets that allow a little bit of free play. If you tap a floating disc you'll feel it wiggle just a little bit under your finger.

In application terms, drum brakes are cheaper and hence turn up on budget cars and bikes. Just above these are vehicles that offer a more effective disc up front and a drum at the rear. This is clever because when you decelerate, the weight transfers forward giving the front wheels a lot more grip than the rear. Placing the disc in the front allows you to make the most of the vehicle's natural physics. Above these are vehicles fast or expensive enough to offer disc brakes through out.

While steel and iron are the preferred materials for disc brakes, high performance applications use more exotic materials. The ultimate type are carbon-ceramic brakes that offer extreme performance and remain fade free even at glowing-hot temperatures. Primarily developed for use in motorsport, carbon ceramics are optional on many high performance cars now.

Since discs are usually hydraulic systems, the biggest downside to them is that if the hydraulic system loses pressure due to a leak or contamination of the fluid, you lose the ability to brake, either partially or fully. The way around this problem is to disconnect the wheels from each other so that all brake systems have to leak or malfunction before a total loss of stopping ability occurs. On bikes, this is normal because the front and rear braking systems are usually independent of each other. In cars, the hydraulics usually connect one front wheel to the diagonally opposite rear wheel to ensure that the driver has two hydraulic systems to rely upon.

Now you know how brakes work. But while the braking system is usually weather resistant, the road surface is not. Which means the tyres do not always have the same amount of grip available. When roads are drying after a shower, you may need to brake when some of your wheels are on dry tarmac and others are on wet. How do you control braking in difficult conditions with just one pedal? That brings us to electronic braking assistance systems like ABS and EBD which we will discuss next month.