The chassis is the skeleton of the automobile. On it we mount the engine, suspension, steering mechanism, brakes and the body to give shape and function to our beloved car or bike. As with everything, the chassis began from humble origins and purpose into today's highly focussed, light engineering marvels.

The early solution was to join two metal beams  mostly iron, but also wood  parallel to each other with several, perpendicular beams. This looked like a ladder and was, hence, called the ladder frame chassis. These early frames needed to be strong and rugged since the roads weren't that good but dynamic performance wasn't key. And today, the ladder frame still underpins the hardcore SUVs and heavy duty trucks. The naturally high ground clearance and strength of this arrangement, plus the relatively low cost of construction makes ladder frames very relevant even today. Another advantage of a ladder frame is that since the body isn't a structural member, making versions as well as body modifications is not hard to do  in terms of cost and time. 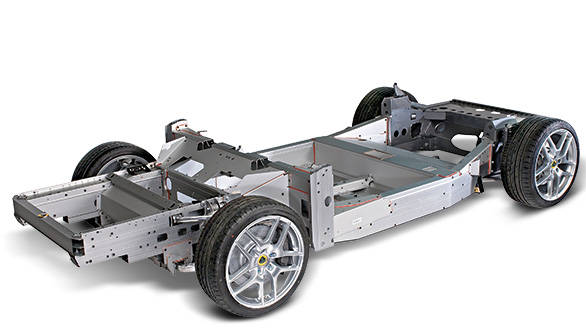 On the chassis, we mount the engine, suspension, steering mechanism, brakes and the body to give shape and function to our beloved car or bike

The height does cause issues. The higher centre of gravity affects the handling and the 'bolted-on' body can add sway and dive to the vehicle's feel. Further, engineers have to perforce make the suspension softer so as to cut stresses where the frame (strong) meets the body (much weaker). The flip side is that the low speed ride is usually good.

Then came the backbone tube chassis where a single strong tubular backbone connects the front and rear axles and uses the tube to house and secure the propeller shaft. The heaviest-duty trucks, like the army Tatras use this with the focus being clearly on reliability over everything else. There are other applications too  the first Hero Honda CD100s used backbone frames, though they weren't tubular in nature.

Then came monocoque frames from aircraft technology. A monocoque integrates the body into the frame as a structural unit. A very strong body frame bears the loads and offers places to mount all the bits  engine, axles, suspension, seats etc. The advantages are many. Monocoques are light and extremely stiff structures. This allows stiffer suspension that make excellent handling possible. In fact, they're so effective that most passenger cars and many SUVs are now monocoque-based. Disadvantages? In case of damage beyond a point, repairs are not possible and the vehicle has to be written-off. Similarly body modifications can completely impair the structure of the car. Which is why, a popular variation of the monocoque frame is the semi-monocoque which increases strength at specific places to mitigate damage to the body.

The next step up is the carbon-tub chassis, as it is popularly called. This is, effectively, a monocoque made from carbon fibre that creates a very, very rigid frame on which the vehicle is built. The material is extremely expensive and is therefore only used in high performance applications where cost isn't that much of an issue. Exotic supercars like the McLaren MP4-12C use this kind of a frame.

The other kind of automotive frame is the space frame. The space frame is sort of like a trellis frame for cars. It uses triangulated structures, usually in tubular steel, to create dramatically strong and light frames. This again, is a relatively specialist application and is seen most famously in the Ariel Atom which exposes its frame to great visual effect.