We discussed how power reaches the wheels from the perspective of the differential over the last two issues. Now let us look at how the power reaches the wheels in terms of the layout of the engine and the driven wheels. Let's see how drivetrains are laid out in cars. While it wasn't the most common for a long time, the most ubiquitous of all the layouts today is a front-wheel drive car. Usually abbreviated to FWD, this implies that the front wheels of the car handle the task of converting engine torque into motion.
In the FWD layout, the engine usually sits just above the front axle. The torque arrives through the gearbox and the differential to the front wheels. This is a terrific arrangement. It's super compact so you can package the non-mechanical elements of the vehicle with great freedom. The actual physical distance the torque has to travel to reach the wheels is short which means fewer components. Which in turn means less wastage and greater reliability. This is what makes it such a popular layout. However, there are downsides too. Front-wheel drive cars are likely to understeer (turn less than you intend to). They can also suffer from torque steer, where power application produces an unintentional direction change as well. And of course if you like oversteer and drifting then FWD cars are rarely any good at this.
So efficient is this system that many modern SUVs are FWD most of the time. As in when the traction conditions are good, the car drives only its front wheels via some form of mechanical or electronic control mechanism. It is only when slip at the front wheel is detected that this mechanism re-routes the torque to the rear wheels and enters four-wheel drive mode. We shall go into the details of these on-demand four-wheel drive systems in the next issue.

Before FWDs became the norm, the older arrangement - still seen in serious performance cars - was rear-wheel drive or RWD. RWD cars (see above) connect the engine and gearbox to the driven wheels with a driveshaft. Mostly the engine is up front, but mid-engined cars place the motor between the two axles, aft of the cabin and some cars, like Porsche's missiles place the engine atop the rear axle. 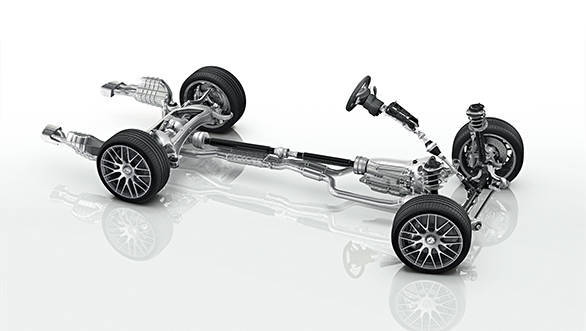 A differential at the rear sends power to the rear wheels. This is actually a neat arrangement. Acceleration causes a rearward weight transfer that gives the driven wheels more traction which in turn causes greater acceleration. RWD cars, thus are good at finding traction. This arrangement also permits oversteer and if you like stunt driving, RWD cars are usually the vehicle of choice.

The system does have flaws. Oversteer is great, for example, for stunting but in the hands of an inexperienced driver or in slippery conditions, it can be a catastrophe. RWD cars are harder to drive fast because the solution to oversteer, for instance, is usually opposite to the natural human reaction to it - they require more skill to drive. RWD systems also have more components and therefore pose cabin packaging challenges and are slightly less efficient overall. Often considered the best of both worlds is the ability to drive both sets of wheels, or four-wheel drive, a.k.a 4WD. In this layout, the engine and gearbox (usually up front) connects to a transfer case - think of it as a centre differential (electronic or mechanical) - that transfers the power to both front and rear differentials. The transfer case has gearing and the best systems offer a regular gearing arrangement as well as an ultra-low gearing option for hard climbs or difficult conditions. 4WD systems are expensive and complex but offer better control and grip in almost every situation. The obvious benefit in a hardcore SUV, obviously is to go off-road, but even in road-based sportscars, four-wheel drive systems can make driving and controlling outsize power easier. It is said that four-wheel drive systems can rob sportscars of the edgy feel of the RWD but many sportscars now use rear-biased 4WD systems that produce an RWD-like feel while being able to switch back to 50:50 front-rear drive that can produce a performance or traction advantage. Look out for the juicy details of on-demand as well as performance 4WD systems in the next installment of Simple Tech.