If you just woke up after falling asleep in the 60s, you should know that the world has changed. There's a real possibility that the fuel we've been using so far - mostly sucked out of the ground - will run out. There is also the issue of the byproducts of fuel use that are altering the planet and slowly turning it into a hostile environment.
It's a combination of these two that is slowly pushing the electric vehicle into prominence. Hybrids are effectively vehicles that can run on electricity either some of the time, or partially and fuel cell vehicles are powered by electricity generated by the fuel cells in most cases. This time, we will focus on pure electric vehicles. 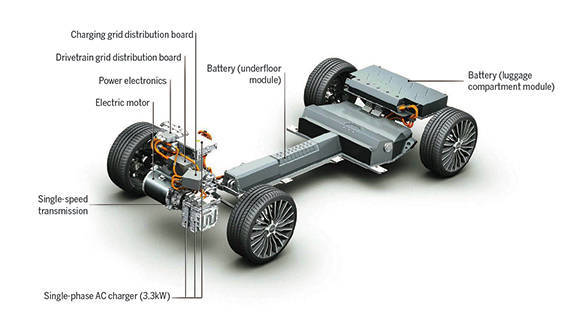 Electric vehicle is a straightforward name for a vehicle that runs on electricity. What this requires is for each driven wheel to be connected to an electric motor. Which is a machine that converts electricity into some form of mechanical energy, in our case, the torque to rotate the wheel. The most basic motor has a rotor, which rotates and is the mechanical energy outlet. This is the end that is connected to the wheel. The rotor is housed inside a can called a stator which does not move but contains windings of wire (electromagnet, common), or permanent magnets (rare). A small but crucial air gap separates the two. The motor usually has some sort of control unit and many have commutators that can switch input to output - allowing the motor to function as a generator and convert mechanical energy into electricity. While there are other kinds of electric motors, the simplest to understand are magnetic motors. The stator and the rotor have magnetic fields when they're activated and these fields interact to product a torque between the two. The rotor starts to rotate in reaction to the torque and whatever is connected to the rotor, therefore, rotates too. The beauty of this arrangement is that it is an extremely efficient system. An internal combustion system only turns about 30 per cent of the energy into motion while electric motors can hit almost 98 per cent!
These motors can be installed in a variety of ways. They can be axle mounted (front, rear or both) and sometimes, they're mounted directly to the wheels as well. The ECU then decides how it wants the power to spread across the footprint and a four-motor four-wheeler can be front, rear or all-wheel drive at the behest of the ECU. This arrangement eliminates a lot of the mechanical complexity that internal combustion engines require. A side benefit of electric motors is that they make a steady peak torque. This gives electric vehicles startling acceleration from a standstill as well as a very smooth feel when you drive.
The problem really, is that electric motors require electricity to function. Internal combustion uses chemical energy derived from relatively stable liquids and that makes them self-sufficient on the go. Storing electricity has, so far, proved to be the primary challenge for electric vehicles. Usually, the solution is batteries.
Batteries are electricity storage and they can be charged in many ways. Motors that can reverse polarity can use the rotation of the wheels, when coasting for example, to charge them. They can also be charged by plugging the batteries into a wall socket. The problem really is that charging car batteries has proved to be a slow process, taking hours. Imagine if refuelling your petrol car took eight hours. Batteries charge quickly when they're low on charge but as the stored charge increases, the charging rate falls. Which is why you'll read that 80 per cent charge is possible in three hours but a full charge requires eight hours. The next challenge is driving range. Most electric cars today can manage 120-160km of range which is considered suboptimal. But the prospect of long charge cycles creates range anxiety - where owners of electric cars worry constantly about whether they have enough charge to reach their destination and then return home.