Lubrication is a very critical operation in a running engine. It is so important that many automobile engines and almost all huge industrial engines are designed to shut down if the lubrication somehow fails. Lubrication is a process which reduces the friction between the sliding parts (for example the piston and cylinder liner), keeps the bearings well lubricated (most critical), and cools down the moving parts under the influence of heat. In short, loss of lubrication causes instant seizure of the engine, requiring an engine rebuild in many cases.

The medium used to achieve this is called lubricating (lube) oil or lubricant. If an engine is properly lubricated, it requires less effort to operate and hence it will consume less fuel, but over lubrication harms the engine when some engine oil (in vaporised form) gets carried away with exhaust gases. This spoils the inlet/exhaust system and catalytic converter due to heavy carbon deposits. 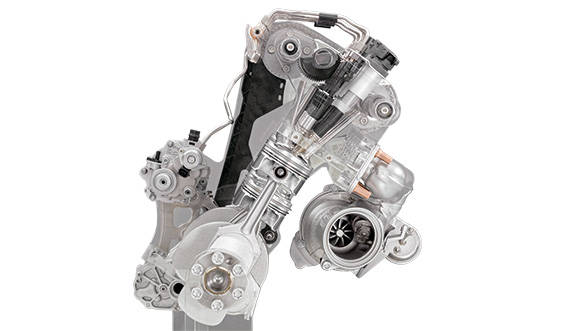 The two basic forms are wet sump lubrication and dry sump lubrication. If the oil is stored in a tray inside the crankcase, this is known as wet sump and is used in most production car engines. If oil is stored somewhere else then it is called dry sump. This is mostly used in high performance sports cars and racing engines. Wet sump is a simple and reliable design, so why go for dry sump lubrication? There are two important reasons for it. Racing cars generate high g-forces during cornering. This forces the engine oil in the crankcase to one side, and it can starve some engine parts of oil resulting in seizure. Also, when the sump is dry it can be made shorter in height; this reduces the total height of the engine and thus lowers the center of gravity. This is of less significance in a production car, hence wet sump lubrication works perfectly on most road-going production cars.

Splash lubrication is mostly used in single cylinder scooter/motorcycle engines.  An oil scoop is designed at the bottom of the crankshaft and lifts the oil at every rotation. It's angled such that it throws oil onto the critical parts such as the crankshaft bearings, piston and cylinder. The oil falls back to the sump and this process is repeated. Then we have spray lubrication (used in some basic in-line and Vee engines), where multiple spray nozzles are arranged at strategic locations. Oil is conveyed forcefully by a pump and is sprayed directly to critical parts and gears.

The most advanced of these lubrication methods is forced lubrication. This system employs pumps (as in the spray type). The crankshaft and con rod have internally drilled holes to convey oil to bearings, piston and cylinder. The oil is also conveyed to camshaft-rocker arm-valve assembly by more holes drilled elsewhere in the engine block. This method is used in heavy duty engines where lubrication of each and every part is essential and normal methods do not work as well.

Dry sump lubrication is similar to the forced lubrication in the wet sump with the only difference being that oil is stored at some other location inside the engine. Hence, loss of lubrication even for a split second can be catastrophic to an engine with such an arrangement.

Two strokers employ a unique method called the mist lubrication. A specified quantity of the engine oil is added with the fuel each time in the tank while refueling. This oil is directed to the crankcase together with the fuel via the carburetor (where it is partially atomised with the fuel). Lube oil, being heavier stays in the crankcase and forms a mist around the crankshaft and fuel being lighter is lifted to the combustion chamber via transfer ports.

The lubrication system also requires filters along with the pump to keep the oil clean. Periodic replenishment of oil is done at every service to cater to any losses due to vaporisation or leakages.