Fuelling is simply a process of drawing fuel from the fuel tank and delivering it to the engine for the propulsion of our vehicles. This is taken care of by the fuel system, and contrary to the way it sounds, it is one of the most complex systems in an automobile. Its objective is not only to transfer fuel from tank to engine but also to time the injection of fuel precisely in each cylinder as well as meter the exact quantity of fuel to be delivered.

The brain of the system is the electronic control unit or ECU. This advance microprocessor governs the time and quantity of fuel injection. It does so by taking reference from the crankshaft angle - amount of air sucked in each cylinder and the throttle position. 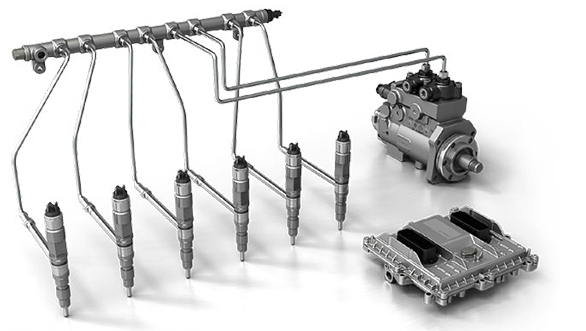 Now fuel is sucked from the fuel tank by the engine-driven fuel pump. The amount of fuel discharged is thus proportional to the rpm of the engine. The discharged fuel goes through the filters and fuel pressure regulator to a common collector or accumulator (most petrol engines), or in a common rail (diesel and newer petrol engines). A common rail is a high-tensile steel pipe, which runs along the length of the engine. From the rails, separate connections are taken out to the injectors of each cylinder. Diesels engines have very high-strength rails owing to the very high pressures involved compared to petrol engines.

The fuel injector is basically a combination of mechanized valve and nozzle. The nozzle breaks the drop of fuel into very fine spray (atomised state) for proper mixing with air and cleaner combustion. These are either mounted directly on the cylinder head, between the inlet and exhaust valves (found in diesels and newer petrol engines), or are mounted on the inlet tracks/ manifolds right before the inlet valves (in most petrol engines). It is operated by solenoids which in turn are energised by ECU as and when required. Normally closed, the injectors when energised introduce the exact quantity of fuel to its respective cylinder. Petrol and diesel are the most widely used form of fuel for the past 100 years or so. These two fuels have different combustion properties and hence are combusted differently.

Petrol, for example, is lighter and explosive. Hence it is injected (at low pressure) inside the inlet manifold just upstream of each cylinder's inlet valves. Here it mixes with the incoming fresh air and is then introduced inside the combustion chamber. The air/fuel mixture is then compressed and ignited by a spark plug at the end of compression stroke. Hence petrol engines are also called as spark ignition or SI engines. If the pressure of fuel was any higher, the petrol would explode on its own due to heat and pressure of compression. The self-explosion of petrol damages the engine parts (knocking is a small scale event of the same phenomenon). This is an example of indirect injection or multi point fuel injection MPFI, widely used in small and medium passenger cars.

Diesel doesn't explode like petrol, instead it burns, and hence it is combusted by the heat of compression and not by spark. For this the fuel, under very high pressure, is injected directly inside the combustion chamber. The high pressure and the heat of compression initiates combustion, and the diesel burns completely till the end of power stroke, till the piston reaches its bottom dead centre or BDC. Hence these engines are called compression ignition or CI engines.