When combustion of the fuel inside the combustion chamber of an internal combustion engine causes the air to heat up and expand rapidly, the part of the engine responsible for bearing the brunt of the pressure and heat spike is the piston.

Visually, a piston is a simple metal object, usually cast from aluminium but sometimes forged in high-performance applications. It is a sculpted cylinder that usually has a domed, flat or 'designed' top which includes cutouts for the valves. This is called the crown of the piston. 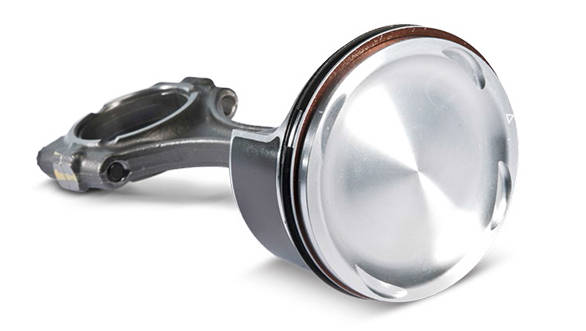 The sides of the cylinder usually have one or more grooves into which fit a springy metal ring (called a piston ring) that serves to seal the combustion chamber as well as control lubrication. The sides of the cylinder are usually covered in a thin film of lubricating oil that allows the piston to slide against it with as little friction (and hence wear and tear) as possible. The ring controls the evenness of this film.

Below the rings is a flat, featureless cylindrical side of the piston called the skirt. The length of skirt can help stabilise the piston (prevent it from rocking as it slows to a stop at the top of its movement range before it heads back down) within the cylinder but better metallurgy and tolerances mean that the skirt grows ever smaller with every passing year. The skirt can have grooves to promote lubrication and a scuffed skirt is usually a good diagnosis of an engine that isn't getting enough oil.

When the piston is pushed down into the cylinder bore by the combustion forces, it turns the crankshaft via a simple lever arrangement - the connecting rod. The principle is the same as the one that you see driving the wheels of a steam engine. The other function a piston serves is to aid the charging and scavenging of the cylinder before and after the combustion stroke. As in the piston has a role to play in filling and emptying the cylinder and though a little different in execution, this applies to both two- and four-stroke engines.

Before combustion, when the valves are open to let the fuel-air mixture into the cylinder, the piston is usually designed to be moving downward so as to create suction to allow more gases to enter the chamber. And similarly, after combustion, the upward movement of the piston helps push burnt gases out of the exhaust valves which are open at that time.

In two-stroke the same effect is achieved with transfer ports using the piston as the device that varies the pressure between the crankcase (which contains the air-fuel-oil mix) and the combustion chamber where the mixture enters for combustion and then exits via a second set of ports.

The best example of a "piston-less" engine is the Wankel or rotary engine that has become the trademark of the Mazda RX-8. In the Wankel, the 'piston' is a triangular- section structure that sits inside the bore and rotates in-line with the crankshaft. Careful shaping of the triangle allows the piston edges to divide the cylinder bore into three areas, one of which hosts the combustion event. The rotation of the 'piston' causes multiple combustion events and that's why these engines are renowned for their smoothness. However, only Mazda has persisted with the development of this engine and hence in use, the normal internal combustion engine is both more popular and more efficient overall.