One crucial aspect of the system is that it makes the inner wheel turn more than the outer wheel via various pivots and gears. This arrangement decreases the turning circle because the car doesn't carve a perfect circle  which would be the case if both wheels turned the exact same amount. 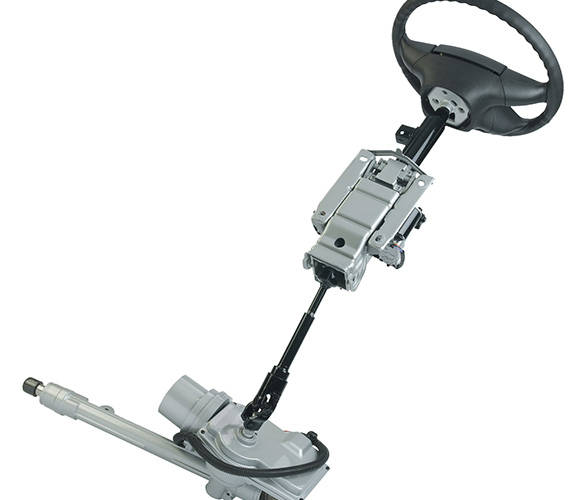 The other important aspect is about safety. Steering columns can become weapons of destruction in a crash. That is why the modern systems are designed to collapse and the steering wheel's boss is the preferred location for the airbag so that the driver can avoid injuries to the face and chest in a crash.

Now to the system itself. Most car steering systems work on the rack and pinion arrangement  the steering column ends in a gear that moves along a toothed rack to actuate the turning of the wheels. Heavier duty vehicles widely use the recirculating ball system where a worm gear is employed. The steering shaft enters a block with ball bearings that circulate as the shaft turns (hence the name). The turning causes the block to move the steering actuation arm via gear teeth on the outside of the block. The recirculating ball system reduces friction (hence effort) and cuts wear which is why heavy-duty applications prefer it. 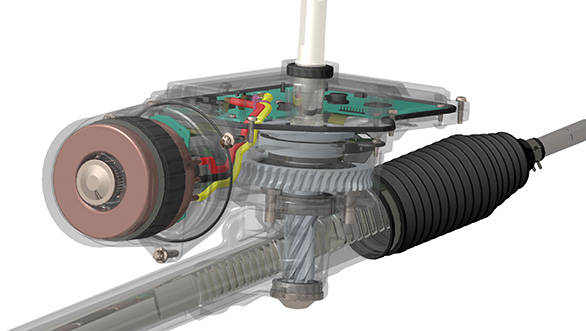 The friction between mechanical parts and the contact patch and the road requires effort to overcome. Enter power assistance systems, which are usually hydraulic or electric in nature.

The hydraulic systems use a control valve that reads your steering input and directs high pressure hydraulic fluid into a (directionally) reversible hydraulic pump which can turn the wheels via steering linkages. This is a reliable system that also offers excellent feedback. On the other hand, it is a complex system and hydraulic pump also consumes a fair bit of power in operation to keep the oil pressure up. The pump, in effect, turns on with the engine and stays on until you turn the ignition off.

Which is why electromechanical power steering systems are steadily replacing hydraulics. Here a vastly more power-efficient reversible electric motor replaces the hydraulic pump and is connected to the linkages. The motor only comes on when you turn the steering wheel. There have been improvements but electric power steering systems tend to offer less feedback and so its application in sportscars has been slow to start with but is now catching up to hydraulic systems.

Both kinds of power assistance comes with a mechanical over-ride where a failure of the assistance leaves the driver with functional steering which is heavier to operate but works.

Further, while narrow roads, congestion and parking in the city is a place where assistance is welcome, the same system can make the vehicle nervous at high speeds. Which is why you now have variable assistance systems that cut power as speeds rise to give a more direct, natural feel at high speed without making steering effort annoyingly high at low speeds.

While most cars steer only with their front wheels, heavier applications have used four-wheel steering for years to cut turning circles and make the big vehicle easier to manoeuvre. Now some road cars, like the Porsche 918, 911 GT3 etc, also use four-wheel steering for better turning performance. Usually, the wheels turn in the opposite direction to the front wheels at low speeds to make the turning circle smaller while at high speeds, the direction aligns with the front for greater response and agility.

The new trend on the horizon now is steer-by-wire. Where the mechanical system is replaced by a microprocessor that operates the turning of the wheels based on what the driver is doing at the wheel. The system is very space-efficient and has been demonstrated in various concepts, including famously the GM Hy-Wire.