Last month we dived into the electric motor or the EM. Which is, in essence, a casing, some wiring and a shaft. It's simple, extremely efficient and has just the one moving part. It is nothing less than magnificent. Let's see how.

The efficiency of the EM is stunning compared to the internal combustion engine (ICE). For instance, the EMs used in the Formula E races are the size of a shoe. These 'shoes' produce 200kW, or 270PS, of power. And they're always at peak torque. So 0-100kmph takes about 3 seconds and top speeds hover around 225kmph. Ben Johnson would have been served rather well with shoes like these. An equivalent ICE, in performance terms, would be huge and it would need filters, alternator, radiator and so much more. You'd also have to treat the emissions. All the EM produces as a by-product is heat.

The auto industry now uses EMs to assist ICEs. This happens in hybrids. EMs take over as the propulsion units in electric vehicles, fuel cells and in hybrids like the Chevy Volt where the ICE only charges the battery. As we discussed the last time, for all the application, there are primarily two kinds of EMs - the ones that run on alternating current (AC) or direct current (DC), or formally the AC induction motor and the DC brushless motor.

But first some current affairs. The phenomenon we use is the simple effect where the flow of electric current through a wire produces a magnetic field. Conversely, when a varying magnetic field crosses a wire, a current starts to flow through the wire. This, the principle of electromagnetic induction, is the basis of how EMs, transformers and many other electrical appliances work.
The AC induction motor is the simplest EM. Inside the casing is the winding which is AC powered. The shaft is usually made of iron bars and is designed to rotate freely supported on the casing end by ball bearings. The bars are joined to each other at the end so that the rotor also becomes a conductor carrying current. 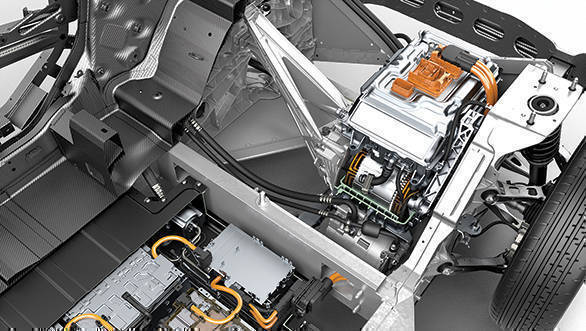 Electric motors take over as the propulsion units in electric vehicles, fuel cells and in hybrids like the Chevy Volt where the ICE only charges the battery

When the windings are given an AC voltage, they produce a rotating magnetic field where the polarity changes constantly. This field revolves around the shaft and causes - by induction - a current in the shaft to start flowing. Naturally, this means that the iron bar now has its own magnetic field too. The interaction of the two magnetic fuels produces torque and causes the shaft to start rotating, and it is this motion that we harness and convert into useful work. So much torque that an electric locomotive can use it to pull a whole train. The rotor shaft rotates a bit slower due to inertia, as if it was trying to catch up with the magnetic field. This is called slip and is similar in nature to the same term as applied to fluid couplings in a torque convertor. Usually, the on-board battery supplies DC power which is converted to AC by an inverter (think computer UPS) before it reaches the windings. The inverter can vary the rotational speed (frequency) of the magnetic field in the winding, which in turn will affect the rotor's speed. In effect, this is the same as giving more or less fuel to the engine - a throttle. Tesla Motors uses these kinds of motors in their cars because AC induction motors offer better performance at higher rpm.

A variant of this is the AC synchronous motor which you will encounter in the railways and shipping. The construction is similar to the induction motor, but the rotor's bars are replaced by a permanent magnet with fixed north and south poles. The poles get locked into the opposite poles of the rotating magnetic field (from the winding) and cause the rotor's speed of rotation to match the frequency of the field. This works more or less like a conventional friction pad-based clutch. Most hybrids and plug-in electric vehicles today use the AC synchronous motor because it produces better torque at low rpm.

Now consider what happens if you stop the electricity supply when a motor is running. As the windings' magnetic field disappears, the rotating shaft now induces current in the winding, effectively reversing the magnetic field. The rotation starts being converted into electricity that we can use to charge the batteries. The shaft, as it loses energy, slows down and that, in effect, is regenerative braking, a natural property of EMs.

Apart from this, EMs are small and so easy to install. They require almost no oil, no separate cooling system if air cooled, no exhaust or inlet mechanisms and almost no maintenance at all. You turn on the power and press the pedal and move forward at peak torque.

Here is the latest example of an electric vehicle, the new Nissan Leaf