"Let's go left," my co-pilot says to me, pointing in the direction of some sort of path that I can vaguely see. I'm sceptical, but what choice do I have really. So I turn the steering left and engage first gear. This is going to be an adventure, I think to myself looking down the path. And then I begin what I believe is a skilful release of the clutch. Except that since I have no real skill, I promptly stall the engine. Well, that was anticlimactic. 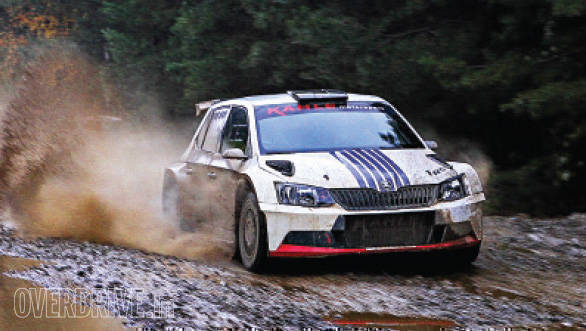 Of course, this might sound like any ordinary drive through the woods gone wrong, a turn missed here and there. But there's one little difference. The car I'm driving happens to be the Skoda Fabia R5. Yes, that Skoda Fabia R5. The same spec machine that Gaurav Gill's just won his second APRC title in. And this co-pilot that I've so nonchalantly mentioned happens to be Matthias Kahle. Seven-time Deutsche Rallye Meisterschaft Champion (that's the German national rally championship). 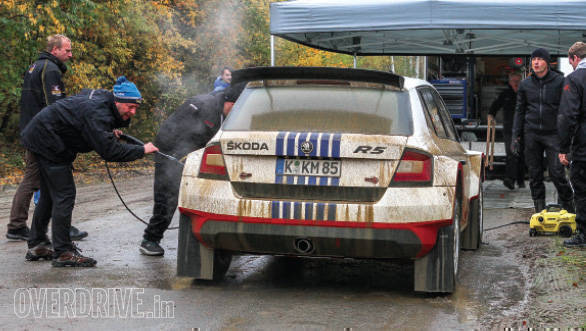 But how exactly did it come to pass that I'd be sitting behind the wheel of a stalled Skoda Fabia R5 with Matthias Kahle sitting next to me in the co-driver's seat? Well, it all goes back to a winter evening in Arvidsjaur, Sweden, when I happened to run into Matthias, who had in the past taught me a thing or two about driving on ice. This time over the course of our conversation, he happened to mention that he was in the process of procuring a Skoda Fabia R5 that he'd be driving in a few rallies in 2016. What I didn't expect was that he'd casually throw in a "You can come to one of our tests. Maybe I'll even let you drive the car."

I said "Oh, that sounds terrific!" I thought "Me? Driving Matthias Kahle's rally car! Sure, why not!"

Bottom line, I don't think I took it very seriously until months later when I got a message from Matthias one October evening. "We're testing at Lausitz," the message read. Along with it were GPS coordinates, and a date and time. Matthias Kahle, as I was to discover, was a man of his word.

Back to that hapless night.  I try starting the engine, but I stall it again. I try once more, and I stall it once more. Matthias offers to help. I assume that he's going to swap places with me and drive back to where his crew is waiting, but he doesn't. You see, Matthias is determined that I'll get every minute of driving time that he can manage to offer me. And to speed up the process - it's already rather late - and get me driving once again, he decides to help start the car for me. This involves him undoing his seat belt, asking me to scootch over a little bit, and then managing to reach over from the co-pilot's seat, and operate the clutch and accelerator for just an instant, before telling me to give it the gas and motor off down the aforementioned path. Tricky stuff, but we get going again.

Earlier that day I'd watched as Matthias put in endless loops of driving on a closed-off stage in the woods of Lausitz. It was a suspension test that was being carried out just ahead of the Lausitz Rally. In the first half of the day, he hadn't seemed pleased. But as the day wore on, with each set of tweaks that were carried out by his mechanics, the car seemed to be getting closer to the set-up that he required. The test was a hard one, for in the cold, dank weather, after each set of runs that Matthias made around the course, they'd need to jack up the car, change the tyres and put new springs on, which in itself was a tricky process. It involved compressing the spring with the back of a flatbed truck - a complicated affair. And then he'd go right out again and continue testing it, sometimes taking a passenger along for the ride. 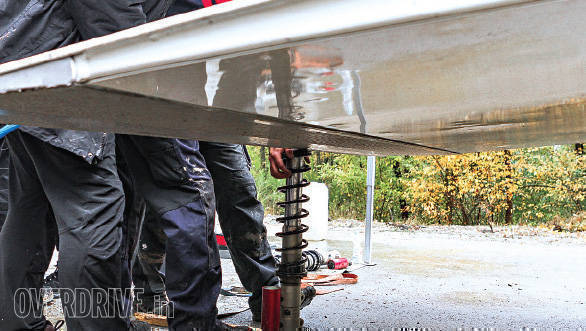 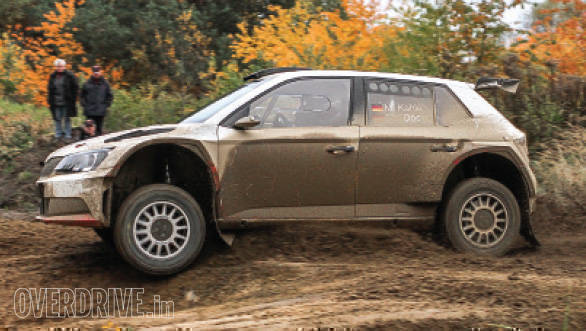 The suspension appears to be working pretty nicely too - just look at the travel when the car's in action!

I was one of those lucky passengers, and having trained my mind to stay blank and accept that I had no control over the situation when a passenger in a race or rally car, I had a rather good time. Perhaps the amusing part was when I asked Matthias what I was allowed to hold if the ride was a little too much for me to handle - indicating the edges of the seat. Matthias looked at me, poker-faced, and folded his hands together as if praying. That, he said, was the best thing for me to do. I listened. I didn't get tossed around too much because of the five-point harness. But I did get scared. Not by the speed at which he was going over the course, but by the car itself! How on earth was I ever going to drive this car? It all looked too complicated. Too many buttons and doohickeys and what not. And there was the fact that I had never driven something with a sequential manual shifter. So many things to worry about!

By the end of the day, or rather by the end of the evening, the sun had long set. The test was still in its final stages. But things were going well. Matthias was now going flat out, looking faster every time he came around the corner where I was shooting from. Finally he climbed out the car and said the test was done. Things were as they should be, and they were prepared for the rally that was beginning the next day. 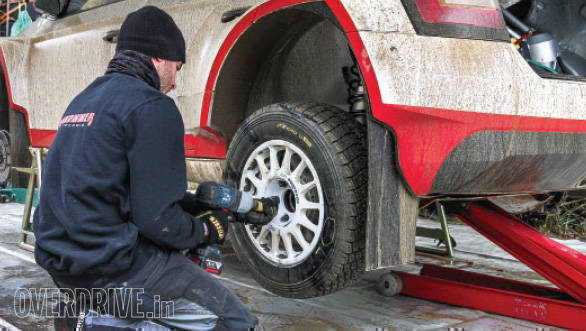 Ah, I thought to myself. It's too late to drive the car now. After all, the team's got to pack up. The car must not be damaged before the event. And it's far too dark to let a newbie drive a rally car. Too bad. Too bad. But there's nothing to be done about it now.

Then Matthias walked up to me and said, "Maybe we can drive down this way because it's mostly tarmac, and you get a little feel of what a car like this is all about." And he wouldn't take no for an answer. When it seemed like my feet wouldn't reach the pedals, he said in his most German accent, "But it must be no problem, we are ze same height!" When I couldn't quite see over the dashboard, a pillow was produced from out of nowhere and I was propped up on it. And thus, rather reluctantly, I was packed off to drive the Skoda Fabia R5. Don't get me wrong; I wanted to drive the car, all right. It's just the audience of mechanics and bystanders that I didn't like. Call it stage fright, if you will. 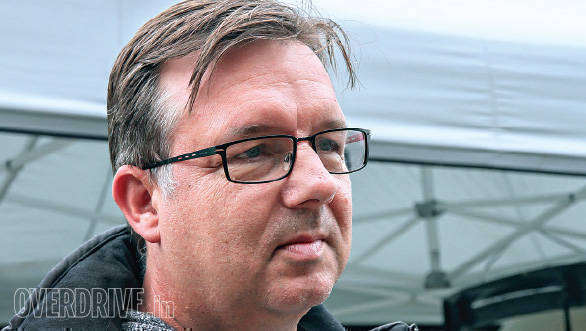 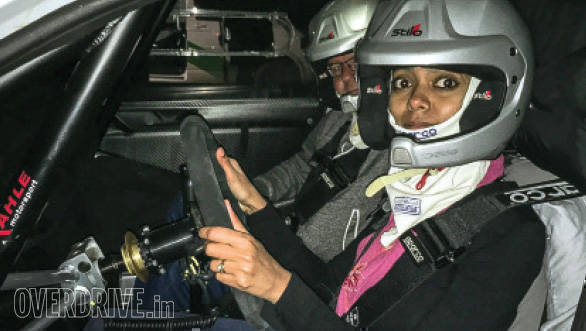 Matthias kindly agreed to be my co-driver in the dark after insisting that I drive his rally car. Dear me!

There was no changing the situation though. There I was strapped into the rally car, helmet on, intercom allowing me to communicate with Matthias. "Clutch in, first gear, accelerate a little, when it feels like it's moving forward, hold the clutch right there, accelerate more, and then let the clutch out. Understood?" I nod. And then I promptly stall the car. "Try again." I nod, I try again, and promptly stall the car. In the meanwhile, the mechanics are busy shaking their heads saying that it isn't good to have the car driven by a newbie the day before the rally that too. But Matthias ignores them and gamely allows me to have another go. I reckon on my fifth or sixth try the car finally gets moving. I later found out that two people had given it a bit of a shove to finally have me puttering off into the darkness - a fact that bothered me endlessly later.

But to focus on what Matthias was saying. "Now more gas, second gear, more gas. And clutch in and brake." So, some distance down the tarmac road, I stop. Matthias wants me to have another go at starting the car and moving off. So it begins again. And when I stall the car for the second time, I realise Matthias' patience is wearing thin. "You have to hold the clutch at that exact place, not let it go!" he says. I want to tell him that I am trying very hard, but the dang clutch is just pushing my foot right back. But one doesn't want to risk incurring the wrath of one's teacher, and so I shut up, focus, and hold the clutch, give it the gas and off I go. This time I'm a little more confident. I move up into second gear and then into third, and I'm feeling pretty darned pleased with myself. Of course, I've missed the turn-off that he's indicated, and since it's a straight road I'm going rather fearlessly on. Look at me, driving a real proper state-of-the-art rally car, a proper roll cage, 270PS under the hood, and not a worry in the world.

Except, we soon realised there were a couple of worries, in that we ended up taking a left turn that led us to the aforementioned marshy bog, after which we needed to take another rather suspicious left turn to remedy the situation. Finally though, we were back on the right path. "Move up into third, and when I tell you to, then shift down to second, then first, and then come to a stop in front of the crew. It's good for the boys to see this!" Matthias said. And so I did just that. I don't know whether it had the desired effect or not, but Matthias seemed moderately pleased with me, so I think I didn't do too badly. 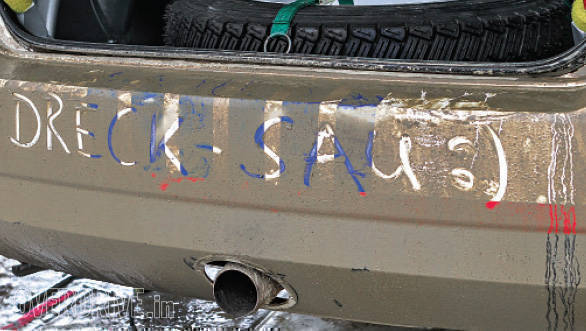 "Dreck-Sau" is German for "dirty pig", which is precisely what the car looked like during the test, as one of the mechanics gamely pointed out too

But that brief evening taught me a thing or two. That even if you can't see what lies beyond the light, it's okay to cautiously proceed. Things usually turn out okay. That sometimes choosing to walk down the most unlikely fork in the road can turn out to be the best decision ever. That failing in front of an audience is no big thing - you'll learn, you'll get over it. That accepting a little push from someone to get started isn't the end of the world - we all get by with a little help from our friends. But most of all, it reaffirmed my faith in human goodness. For the car that I got to drive was a car that Matthias was rallying the very next day. A car that Kahle Motorsport rents out to rally drivers when Matthias isn't rallying it himself!

Ah, there are many things that I remember when I think of Matthias Kahle. The fact that the word "piglet" has the ability to send him into endless peals of laughter. The tales of the Dakar he regaled me with, which included the time him and his co-driver were so thoroughly lost in the desert that they decided to spend the night sleeping in the dunes, under their buggy. The fact that his face betrays no emotion whatsoever when he's driving at his very fastest. But most of all I'll remember him as the man who wouldn't let me get out of driving his rally car no matter how hard I tried. For that I shall be eternally grateful.

Oh, and just in case you were wondering what happened at the Lausitz Rally? Well, Matthias Kahle and co-driver Christian Doerr won the rally by well over three minutes.